He might have made the nice play, but his wife's shirt is better.

Not all excellent plays are made by the guys on the field. Here's a breakdown of the play of the day made by some dude in the stands.

Situation: Top of the third inning, runners on first and second, no outs. Jhonny Peralta homered to right-center field off of Miami Marlins' starter Wade LeBlanc in the top of the first inning and is ahead in the count, 1-0.

On the next pitch, LeBlanc tries to bury a fastball down and in, but Peralta fouls it off. Here is where the magic unfolds.

At first, it seems like a random pop fly caught by a fan. Not so impressive that it warrants a blog post, right? Wrong. Watch this replay from an alternate angle.

Yup, that's our boy catching the ball with his hat, then showing the ball to the umpire like a true big leaguer. Congratulations, sir. Your career UZR is now higher than Delmon Young's.

On the next pitch, LeBlanc throws a breaking ball for a called strike. No one cares. Our star has more important things on his mind.

Look at that form! I'm not even sure what he's doing with his right hand there, but he calmly places an order for two of something with the left hand. Either that, or he's posing for a picture with a peace sign and that stupid duckface thing girls do on Facebook. However, I'd like to think that this guy, a true professional from what we've seen so far, is above such shenanigans. Two hot dogs it is, sir. That will be eight dollars.

Rob Brantly, sensing that this home crowd is much more focused on their newest celebrity than the game itself, calls time in attempt to restore order. It doesn't work. Instead, our guy is busy being an all-around good person and gives the ball to a young fan on his left.

Now this play didn't mean squat in the grand scheme of things, especially considering that we're still in the middle of Spring Training, but it's a heck of a lot better than another Rick Porcello trade rumor post.

Oh, and the real reason we wrote this post? 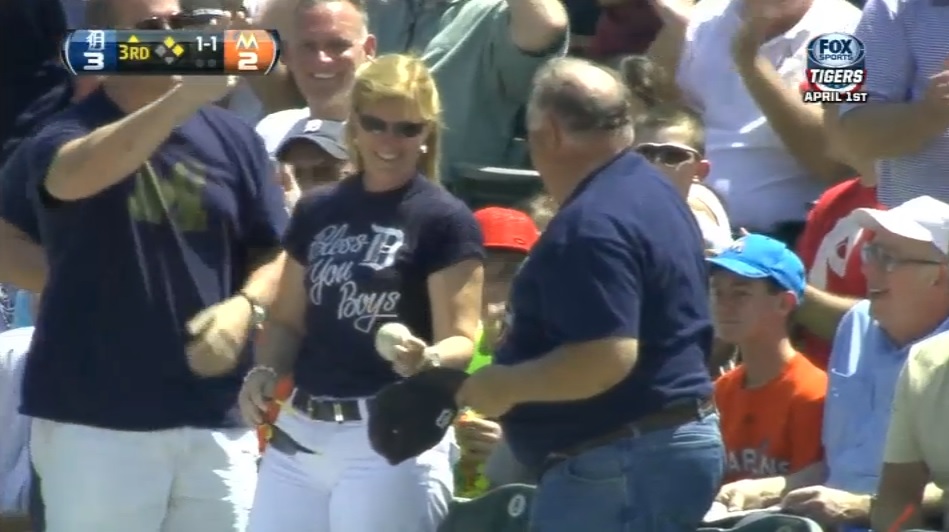