Quick thoughts: Brayan Villarreal and the bullpen by committee

Share All sharing options for: Quick thoughts: Brayan Villarreal and the bullpen by committee

Well, so that happened.

The Blue Jays blew up the Tigers' bullpen in a big way, coming from behind to win 8-6, which was as brutal to watch as it sounds.

What can we take from this loss, if anything?

Brayan Villarreal's job may be in jeopardy. If it isn't, it should be. For the bullpen by committee plan to work, guys like Villarreal need to contribute. Period.

Despite having big league stuff, Villarreal has proven he doesn't have the command to be used in any kind of high leverage situation. Or any situation, for that matter.

The Bruce Rondon -- or Jose Valverde, or Duane Below, or anyone, someone who can step in Villareal's spot and throw strikes -- watch is on.

Other than that, I'd rather just forget this ever happened and move on. Hopefully, the weather will cooperate and rain stays away, because this fan base doesn't need to stew over the bullpen all day tomorrow.

That would really be unpleasant.

Austin Jackson has reached base in his first at bat in six of eight games, scoring five times. Three of those times he's scored on a fielder's choice, once each on a ground out and sacrifice fly. The Tigers have yet to allow a 1st inning run, taking 1st inning leads in six games. Hat tip to Twitter must follow Matthew B. Mowery for the stat.

Today's game was the sixth game out of eight games the Tigers have led 2-0, and the fourth game they have led 2-0 by 2nd inning.

Watching the Tigers' current top of the order at work reminds me of how effective Lou Whitaker and Alan Trammell were in their primes. It felt like they gave the Tigers a 1st inning lead in every game back in 1984.

Gonna take locals a while to believe Porcello is basically a new pitcher. But stuff today is what was on display in Florida. Major upgrade.

Porcello continues to pitch like he did for five innings afternoon, it won't take a while to believe. Let's forget the 6th ever happened. But in that asking for more than five innings from Porcello usually leads to trouble, he's not a new pitcher.

Torii Hunter is quickly learning right field at Comerica. He turned what should have been a Colby Rasmus' 5th inning double into a single. Rather than run to the wall on a hard hit liner, Hunter turned and perfectly played the carom. Rasmus smartly held at 1st base.

As seen on FSD, here's Rick Porcello being asked to prom:

Kurt IMed me to ask what Rogo's response to a prom invite would be. Easy. Something to the effect of "@#@#$#$"

In regard to Steve Delabar's fun filled appearance, this tweet seems appropriate:

From today's "ERA for relievers is deceptive" file: TOR's Delabar comes on with bases loaded, walks two runs in and allows single. No ER.

Hunter was Comerica'd in the 6th (a fly ball to Death Valley in right center) and the 8th (this time to dead center), both resulting in a long, loud outs. Lynn Henning and Juan Gonzalez smiled knowingly.

Why is Twitter fun? Watching our good friend David Torkarz slowly lose his mind when Brayan Villareal enters the game. 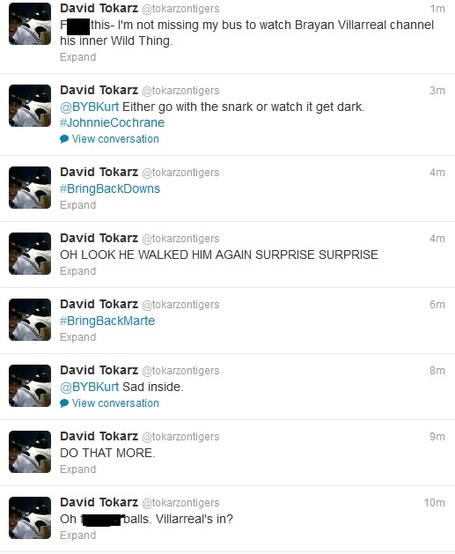 Or I just could have posted something like this:

When Press Box announcer comes on to tell us Brayan Villarreal's line can he just say "BAD". I think that covers it.

Octavio Dotel didn't have a good day, either. He give up a bases clearing double in the 7th, then this happened in the 8th... 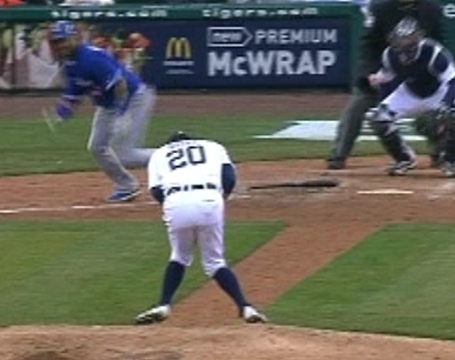 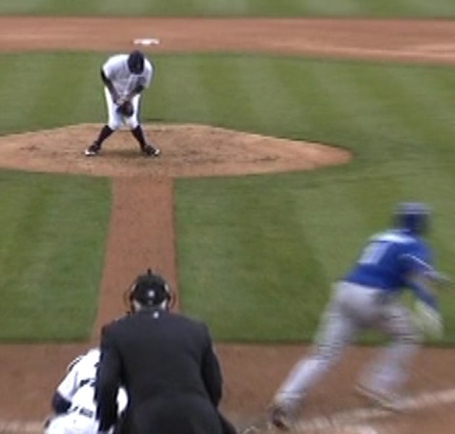 How do I put this delicately: Octavio Dotel hurt his penis.

Cue the Jordany Valdespin references. As painful as it was for Dotel, there was humor to be had.

That looked like it might have hurt, even if it was a one-hopper. Good thing is, everyone on both teams laughing at him

If I didn't laugh at today's bullpen meltdown, I'd cry.

Rick Porcello (for five innings): Porcello looked like the pitcher we saw all through spring training, allowing just one run.

Jhonny Peralta: Entered the game struggling along with a .200 batting average. Three hits in four at bats later, Peralta's up to a respectable .276.

Prince Fielder: Has to get a roar for beating out a double play ball (earning an RBI) AND an infield hit. Fielder may be a big man, but he's by no means slow.

Rick Porcello (in the 6th): His 6th gave more ammo to those who believe Porcello is a five inning pitcher.

Brayan Villarreal: The Bruce Rondon countdown started the moment Villarreal was pulled from the game.

Octavio Dotel: Villarreal may have set the fuse, but Dotel lit it.

GAME SEVEN PLAYER OF THE GAME: