On a bitterly cold afternoon in Detroit, the Tigers took the rubber game of their three game series with the Toronto Blue Jays, 11-1. The Tigers would put the game out of reach by scoring ten unanswered runs after the Jays knotted the game in the 2nd.

Read More: Quick thoughts: Much ado about nothing Game thread

The sneaky on the base paths Miguel Cabrera manufactured a run to give the Tigers another early lead. Why "Sneaky?" Read on...

Cabrera walked with two out. Fielder followed another walk, With Victor Martinez at the plate, the Blue Jays were shifted toward the right side of the infield and no one was paying attention to the not exactly fleet of foot Cabrera. While NL ex-pat Josh Johnson was looking toward the plate, Cabrera took off for 3rd.

By the time Johnson realized what was happening, Cabrera was 3/4 of the way to 3rd, stealing the base without a throw.

Martinez made the Jays pay for their embarrassing nonchalance with an RBI single to left (Click for video). Tigers up 1-0, thanks to Miguel Cabrera, manufacturer of runs.

The Jays tied the game 1-1 in the 2nd, much in thanks to Comerica's brutal, swirling winds.

With one down, Fister hit Rajai Davis with a pitch, then stealing 2nd (replays showed he was out). Colby Rasmus followed by serving up a fly ball to left. On a normal day, Andy Dirks makes the easy catch. Today, not so much. Dirks broke back on the ball, then took a circular route forward as the ball died in the wind, dropping in front of him for a single.

Runners now on the corners thanks to the whims of Mother Nature, Mark DeRosa's sacrifice fly to deep right easily score Davis to knot the game at 1-all.

On a cold, rainy, windy. day where you wouldn't expect much offense, the Tigers were actually able to generate plenty, retaking the lead for good in bottom half of the inning.

Hot with the bat Austin Jackson followed with an RBI single to right center, advancing to 2nd on a futile throw home. The even hotter Hunter bounced a high chopper over 2nd to drive home Jackson, the Tigers now up 4-1.

Hottest of all is Cabrera. He absolutely crushed a Johnson fastball to Death Valley, the ball hitting the base of the scoreboard in right center. By the time Davis got the his throw in, Cabrera was standing on 3rd with his first triple since 2010, Hunter had scored, Johnson was on the ropes, and the Tigers were up 5-1.

Fielder sent Johnson packing to a warm clubhouse after 1 1/3 innings with an RBI single. Right-hander Édgar González would end the inning without allowing another run. But the Tigers had put up a five-spot on the Jays to take a 6-1 lead -- just like (GULP) yesterday. The worry was unfounded.

Having sat for quite some time, Fister had command issues in the 3rd, immediately pitching himself into trouble. Amazingly, the Tigers' defense immediately bailed him out.

Jose Reyes walked, taking 2nd on Melky Cabrera's single. Two on, no one out, Jose Bautista sent a ground ball into the hole on the left side. Peralta got to it and had only one play, at 3rd base. The throw was on target, Cabrera slapping on the tag on Reyes for the first out.

The Tigers would load the bases against González in the 5th, but fail to extend their lead. Radiating heat off his bat, Jackson led off and singled. He would move around the diamond on a Cabrera ground ball and walks to Fielder and Martinez. But Dirks would end the the threat, grounding out 4-3.

The game became official once Fister stranded Reyes on 2nd after a lead off single to end the 5th inning, the Tigers still clinging to their 6-1 lead.

The Tigers would finally capitalize on a bases loaded situation in their half of the 5th.

After Peralta walked and Avila singled, Infante was asked to lay down a sacrifice bunt. He did even better. 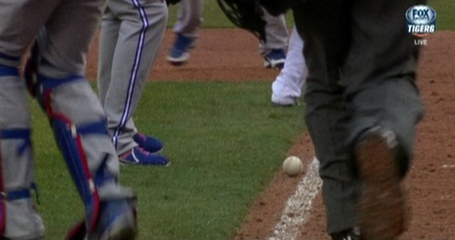 Infante's bunt hugged the 1st base line, and all Esmil Rogers could do was watch the ball roll to a stop in fair territory for a single.

All Infante could do was smile. 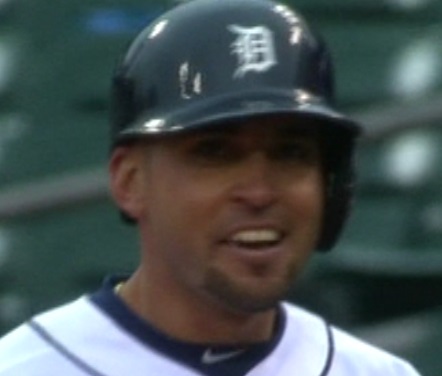 After Jackson forced Peralta on a 5-2 fielder's choice, the bases remained juiced. The scorching hot Hunter drove in a pair of runs when he slashed a single to right, the Tigers now up 8-1. Fielder drove in two more with a double to the gap in right (Click for video), the Tigers running away from the Jays with a 10-1 lead.

Fielder tacked on another run, his fourth RBI on the day, driving in Jackson with a sacrifice fly in the 7th. The game was officially a laffer at 11-1.

Fister was cruising by now, needing only 17 pitches combined to get through the 6th and 7th innings. His pitch count entering the 8th was 85. Fister's marvelous day ended after a 1-2-3 8th inning, given the "Handshake of doom" by Jim Leyland after 107 pitches

Al Alburquerque pitched the 9th, allowing a pair of base runners before striking out Emilio Bonifacio to send the Tigers off on a high note to face the A's late Friday night.

Game, and home stand, over.

The Tigers are playing hide and seek with .500, the victory moving them back over the break even mark at 5-4. The Blue Jays continue to under-perform to their sky high expectations, leaving town residing at the bottom of the AL East standings at 3-6.

The Tigers win their second series of the season, wrapping up the home stand 4-2. They start a nine game, eleven day west coast road trip tomorrow night in Oakland.