Max Scherzer went six innings, struck out 11 and allowed just two runs. Detroit could not turn that into a win for him.

Failing to score after the early innings came back to bite Detroit in the butt yet again this season.

Prince Fielder gave the Tigers a three-run lead in the third inning with a home run to center field, but his team never scored again. Nine innings later, Josh Donaldson drove a ball into the right-field seats in the 12th inning off Brayan Villarreal to give Oakland the 4-3 walkoff victory.

It was Oakland's ninth win in a row. Meanwhile, Detroit fell back to .500.

The pattern of early scoring -- generally a good thing -- then a long dry spell -- always a bad thing -- has haunted the Tigers this year. And let's be honest: it spoiled a pretty good performance by both the starting pitching and the bullpen.

The Tigers got 5 1/3 innings out of the bullpen up until the walkoff with just one run allowed. Drew Smyly gave up the game-tying run, but Octavio Dotel (2/3 inning), Darin Downs (2 innings) and Villarreal (1/3 inning) had worked scoreless appearances after that.

Receiving no decision, Tigers starter Max Scherzer struck out 11 batters and allowed five hits and a walk in six innings of work. He was a bit inefficient to start the game, needing 25 pitches in the first inning before settling in to finish the day at an even 100. He allowed two runs, both earned, one that scored with assistance of an E1 -- also the Tigers first error committed this season.

Of course, we can all sit down and have a conversation about Villarreal later -- and a similar conversation might go on between Leyland and his coaches as well.

But let's not stray too far from the fact the lineup didn't get much done.

Fielder had fours hits, falling a triple short of the cycle. Austin Jackson (2 hits), Andy Dirks (2 hits) and Torii Hunter (1 hit off the bench) accounted for five hits at the top two spots of the lineup. But Miguel Cabrera (1-for-4), Victor Martinez (0-for-5), Alex Avila (0-for-5) and Jhonny Peralta (1-for-5) failed to take advantage of any opportunities presented.

Avila had a typical game, which is to say he got beat up and didn't hit. He took a backswing to the helmet which stunned him briefly and sent him to the ground, then fouled a ball off his leg in his next at-bat.

Those who complain about Don Kelly and Ramon Santiago will be happy to know their combined for 1-for-9 at the bottom of the lineup didn't help either. Santiago's hit was a triple in the 12th inning. (Some question whether it was a home run, but the umpires did not deem it close enough to review.) Kelly was finally pinch-hit for but it didn't matter.

So, in the end: a long, late and ultimately disappointing result, with the middle of the order standing runners and wasting good pitching rather than the bullpen wasting good hitting. 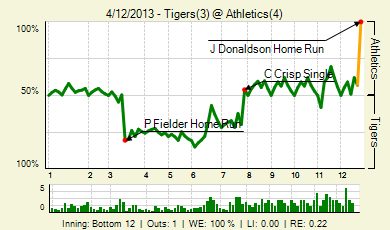