Brayan Villarreal hasn't pitched very well so far in 2013, but fortunately, his issues can be corrected.

Let's get the obvious part out of the way first: Brayan Villarreal has stunk up the joint so far in 2013. In 1 2/3 innings, he has allowed nine earned runs on six hits and five walks, good for an 0-2 record and 48.60 ERA.

Before we jettison him off to Toledo, however, let's take a look at what could be going wrong with the 25 year old Venezuelan. Keep in mind that everything we're working with here is an extremely small sample size.

Looking at his PitchFX data (courtesy of pitchfx.texasleaguers.com) from 2012 and 2013, the first thing that jumps out to me is his velocity. In 2012, Brayan's fastball averaged 97.1 miles per hour and his slider averaged 87.0 miles per hour. This season, those velocities are down to 94.9 and 84.5, respectively. Looking deeper, this doesn't seem to be just an April issue, either. In 2012, his April velocity was nearly identical to his season-long averages.

*Villarreal has only thrown one two-seamer in 2013, a ball that missed the plate badly.

If Brooks Baseball is your particular PitchFX cup of tea, the data from Brooks show a similar drop in velocity.

*Same issue as with the two-seamer above.

After finding the drop in Villarreal's velocity, I was interested in seeing whether his delivery was out of whack. Sure enough, the data show a major change in his release points. 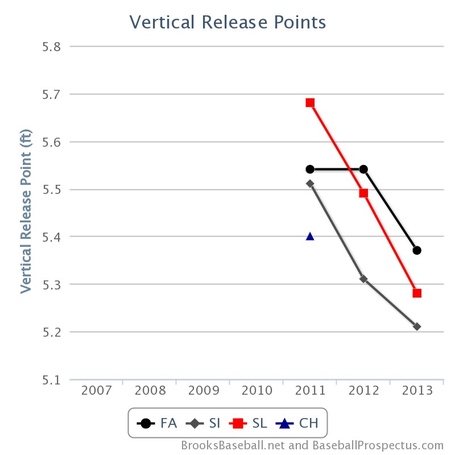 Here is Villarreal's slider to strike out Chris Young from last night's game.

Now, here's a fastball that Villarreal threw to Jeff Keppinger exactly one year earlier, on April 12, 2012.

Notice how Villarreal is more upright in the pitch from 2012, while his delivery from 2013 looks much more unbalanced*. It also looks like he is getting more bend in his back (right) knee in 2013, though this could also be due to a slight difference in camera angle. If he is getting more bend in that knee, it is probably because he is extending his front (left) foot too far when stepping into the pitch. This would cause a cascade of issues with his delivery, most notably that his right arm would lag behind slightly, causing the drop in both velocity and release points that we pointed out above.

*If you still don't see it, watch his head and torso. They jerks violently to the side in the top GIF, while stays relatively level in the bottom one.

3. Villarreal is unbalanced in his delivery

In summary, these issues are problematic, but also encouraging, because they are fixable. If Villarreal can sort out his mechanics either in Toledo or with pitching coach Jeff Jones -- who has a great track record of this with the Tigers already -- then he should be fine.