Share All sharing options for: Game 12 Preview: Tigers at Athletics

You may remember Parker as the young right-hander that went toe-to-toe with Justin Verlander twice during the ALDS meeting between these two clubs last year. Between those performances and the 13-8 record and 3.47 ERA he compiled last year, I came away impressed with his potential. This year hasn't been so rosy thus far. He only lasted 3 1/3 innings in his last start, allowing nine hits and three walks to the Los Angeles Angels before being lifted in the fourth inning. Prior to that, he allowed four runs in five innings against the Seattle Mariners. His WHIP is a whopping 2.40 right now.

So what's the problem? Like we saw with Brayan Villarreal yesterday, Parker's release points are down. 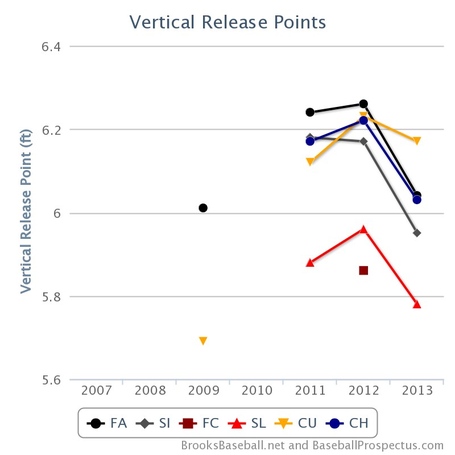 Parker's two-seam fastball has been the main culprit of his struggles so far in 2013. He is allowing a .429 average and .321 ISO off of the two-seamer, mainly thanks to a 25% line drive rate that is way above what you want to see from a two-seam fastball. His two and four-seam fastballs average 92-93 miles per hour. He will also mix in a slider against right-handers and a changeup to left-handers.

Sanchez put together one of the best outings for the Tigers' rotation on the young season in his last start, pitching seven strong innings against the Toronto Blue Jays. Sadly, it was only the fifth time in his 17 starts with the Tigers that the offense scored more than three runs with Sanchez on the mound. Anibal's changeup has worked wonders against left-handed hitters, per usual, but his early season success is largely due to the fact that only one right-handed hitter -- Josh Willingham of the Minnesota Twins, in case you're interested -- has reached base against him in his first two starts.

On one hand, you have an opposing starter in Parker who is struggling to get batters out. On the other, you have the offense's strange aversion to scoring runs when Anibal Sanchez is on the hill. Something has to give today. Given Parker's skill level and his success against the Tigers in his young career, I'd wager that he bounces back today with a strong outing.

The Tigers drop a close game, but the bullpen doesn't allow a run.