How do you take a shaky bullpen out of the equation? Excellent starting pitching from Anibal Sanchez and a powerful Tigers offense raking A's pitching for 10 runs on 14 hits.

The Detroit Tigers took the rubber game of their three-game series with the Oakland Athletics with a 10-1 victory. The Tigers take two straight from the A's, who had been riding a nine-game winning streak.

The Tigers clubbed 14 hits against five different A's pitchers, including four from Austin Jackson and three from Torii Hunter. Anibal Sanchez (2-0) twirled seven innings, allowing only one run on three hits to earn the victory.

A's starter Jarrod Parker couldn't get out of the fourth inning, tagged for nine hits and eight runs in 3 2/3 innings.

The Tigers' powerful offense put the A's back on their heels with an early barrage. Sanchez made sure they stayed that way.

Just two batters into the game, the Tigers were up 1-0, thanks to the dynamic duo of Batman and Robin Jackson and Hunter.

Jackson led off another game by reaching base, lining a single to center. Hunter continued his torrid start to the season by clubbing a long RBI double over the head of center fielder Chris Young.

The rally didn't die there. The only Tiger hotter than Jackson and Hunter, Prince Fielder, was given an intentional pass. Victor Martinez spoiled the strategy by sending a drive off the right center field wall near the 388' mark. Hunter held up, not catching the flight of the ball immediately. He then had to get on horse in order to score, narrowly beating the A's relay by sneaking his hand past catcher Derek Norris.

Martinez was credited with one of the longest RBI singles you'll ever see on the play, putting the Tigers up 2-0.

The Tigers stretched out their lead to 4-0 in the second inning, thanks to one swing of Jackson's bat.

With Alex Avila standing on second after a single and wild pitch, Jackson smashed a 3-1 Parker fastball over the 388' mark in left center (MLB.com video). The line-drive, two-run homer was Jackson's first of the season, giving the Tigers a four-run lead.

The A's scratched together a big time scoring threat in the bottom of the third. Sanchez was up to the challenge.

Eric Sogard singled with one out, John Jaso following with a base on balls. Young grounded into a 5-4 fielder's choice, beating Omar Infante's throw to first to keep the inning alive. Two down and Seth Smith at the plate, Young stole second without a throw, putting A's on second and third.

Down 3-1 to Seth Smith, Sanchez put on a marvelous display of pitching. He dropped a breaking ball in the zone past Smith (who was obviously sitting on a fastball) for strike two, then blew a fastball by him for a swinging third strike to end the threat.

The Tigers' offense made the A's pay for not coming through against Sanchez, adding on to their lead in the top of the fourth.

One down, Jackson singled, his third hit of the game. Hunter launched another drive to deep center, Young getting his glove on the ball, but unable haul it in. It was ruled a two-base hit for Hunter, with Jackson reaching third base. Ducks on the pond, Miguel Cabrera swung at Parker's first pitch, lining a two-RBI single to left.

Fielder continued treating A's pitchers like they were serving up batting practice, smacking a liner into the gap in left center, rolling all the way to wall. Running on the pitch, Cabrera was able to score from first without drawing a throw.

Fielder's 19th RBI gave the Tigers a 7-0 lead and sent Parker to the showers. Righty reliever Evan Scribner entered the game to face a scuffling Andy Dirks. Scribner allowed the inherited runner to score when Dirks singled through the box, Fielder crossing the plate with the fourth Tigers run of the inning and eighth of the afternoon.

Sanchez pitched into another jam in the bottom of the 4th, though the home plate umpire may have "squeezed" him into it.

Jed Lowrie singled, Brandon Moss walked. After Beard Boy, Josh Reddick, flew out, a passed ball by Avila with Josh Donaldson at the plate moved the runners into scoring position.

Donaldson would load the bases, drawing a walk on what appeared to be strike three according to everyone (Sanchez, Avila, FOX and MLB pitch tracking, the viewing audience), but not to home plate umpire Sam Holbrook. 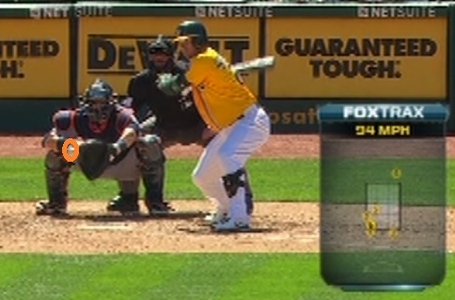 Norris would drive in the A's first run with a sacrifice fly to left, making it an 8-1 game. Sanchez would finally get out of the inning by catching Sogard looking at a 3-2 breaking ball ... which Holbrook correctly called strike three.

Leading off in the sixth, Hunter tripled past a diving Smith. Smith went for the all-or-nothing play in left ... and got nothing. Despite the middle of the order due up, the Tigers weren't able to capitalize on the misplay. Hunter was ultimately stranded, the Tigers' lead remaining at 8-1.

Jackson's terrorizing of A's pitchers continued in the seventh, driving in Jhonny Peralta (who had led off the inning with a double) with a two-out single. His fourth hit of the day pushed the Tigers to a 9-1 lead.

On cruise control, Sanchez had set down eight A's in a row until Norris doubled off the top of the wall in left center with one out in the 7th, missing a home run by inches. A home run is what would have been needed to get Norris home, Sanchez setting down the next two A's to end another threat unscathed.

In the eighth inning, Fielder reached base on throwing error, coming around to score the tenth run of the day on Peralta's Texas League single to center.

Up 10-1, Rick Porcello entered the game in the bottom of the eighth in order to get some work. He didn't get much, needing only six pitches to get three outs.

Porcello would get the final six outs in order, tossing a stress-free ninth.

The Tigers move to 7-5 on the season, taking two of the first three games of their west coast swing. The A's drop to 9-4, losers of two straight after winning nine consecutive games.

The Tigers' long road trip continues on toward Seattle, where they start a three-game series Tuesday night.