GIF of the Day: This young A's fan is not amused, but the Fox Sports Detroit broadcast team is

Tempers flared in the stands in Oakland today when a young fan decided that a foul ball was not worth his affection. Here is the young man's story.

Share All sharing options for: GIF of the Day: This young A's fan is not amused, but the Fox Sports Detroit broadcast team is

The Oakland A's were on cloud nine heading into this weekend's series with the Tigers, capping off a three-game sweep of the Los Angeles Angels the night before. Those good feelings carried over when they won in walk-off fashion on Friday night.

However, after a four-run loss on Saturday and down 9-1 in the eighth inning of today's game, the fanbase had reached its breaking point. One young A's fan took his frustration out on a souvenir from a stranger, tossing a foul ball back from whence it came.

This sparked all kinds of laughter and banter from the Fox Sports Detroit broadcast booth, including a couple of gems from Rod Allen.

Mario: Oh, check that out! No way.
Rod: That's beautiful. I love it.
Mario: He just chucked it!
Rod: He got a good arm, that boy got a future.
Mario: Does he understand that foul balls are golden?
Mario: Let's check it out here. Guy catches it, gives it to the dad. 'Why don't you give it to your son?' 'I don't want it.'
Rod: Dad was shaking his hand 'thank you,' and he threw the ball away.
Mario: I don't even think the dad saw him chuck it.
Rod: He didn't!
Mario: No dinner for that young man tonight.

At this point, Mario sounds like he's in tears from laughing so much. Someone else in the FSD booth has been audibly cracking up for the last 90 seconds as well.

Mario: I'm sorry, but that's funny. That guy out of the goodness of his heart gives up the ball, and the young man's like 'oh no.'
Rod: And look at his little brother, his little brother's in timeout too. 'You always gettin' me in trouble.'
Mario (laughing hysterically): 'You always get me in trouble!'
Mario: Where did that ball land is what I want to know. Did it hit somebody in the head?
Rod: Little brother was havin' a good time.
Mario: He was, until that.
Rod: You know, now all of a sudden one gets in trouble and then everybody gets in trouble.
Mario: 'I'm tired of you gettin' me in trouble.' Oh, that was beautiful.

Later in the inning, the FSD cameras found the family again, and things had not brightened up.

Mario: What's the update on the family?
Rod: Still time out.
Mario: The, uh, his brother is a little bit upset.
Rod: That's not right.
Mario: No, it's not.
Rod: Somebody get those two kids a baseball.
Mario: Please, somebody.

Our story would have a happy ending, however, as the A's staff caught wind of this situation and brought the kids a couple of baseballs to take home. 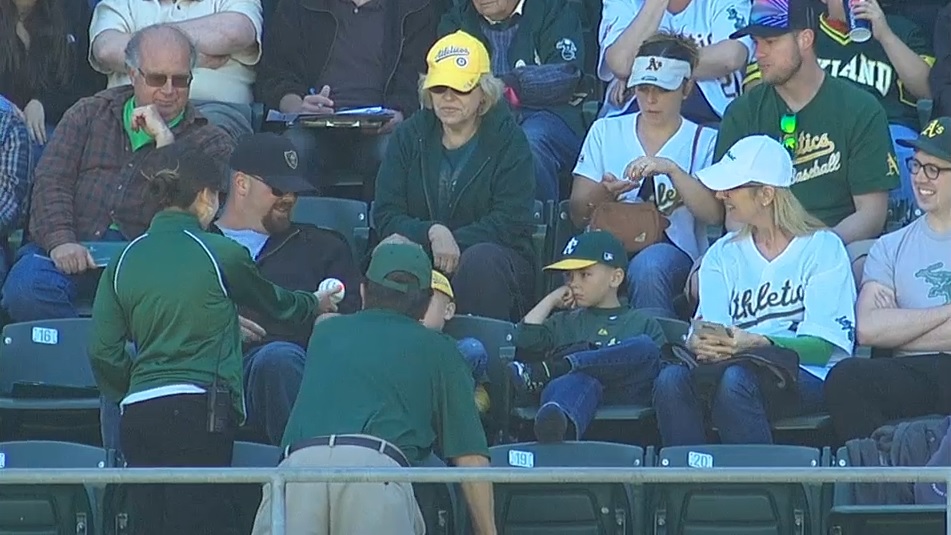 Nice move, kid. That ball is probably cleaner than the one you tossed anyway.