What's the best way to live a stress-free life? Keep the Tigers' bullpen out of it.

Anibal Sanchez and the Detroit Tigers offense did us all a solid this afternoon. They kept the bullpen at bay, and out of our hearts and minds, for at least one day.

After several games where you needed needing to break out antacid, even when the Tigers held what you would believe is a "safe" lead (such as yesterday's six-run cushion which never, ever felt completely safe), I NEEDED THIS.

Am I overreacting? Of course I am! But I'm thinking I'm not the only one who feels this way.

Logically, I know everything involving the bullpen's struggles is skewed by small sample size, cold weather and just plain luck, both good and bad. Their track records show the talent is there and the members of the bullpen will turn things around soon.

Emotionally, I want the Tigers' brass to DFA everyone in the pen when something unforeseen happens.

Give up a hit? TOLEDO CALLING!

Allow a run? CUT HIM!

I know acting this way is silly and unreasonable. But I can't help myself. Which is why today's cake walk was badly needed, easy and stress-free.

Let's start fresh with the bullpen on Tuesday. It's all gonna be OK! (knocks on wood)

Doesn't get much prettier than this.

Unavailable out of the bullpen today were Octavio Dotel (elbow issue), Drew Smyly and Joaquin Benoit.

The Tigers "Sunday lineup" had ALL the regulars playing? What was Jim Leyland thinking?

On the first inning bang-bang play at the plate, Derek Norris never tagged Torii Hunter. Though I'm not sure Hunter ever touched home plate. 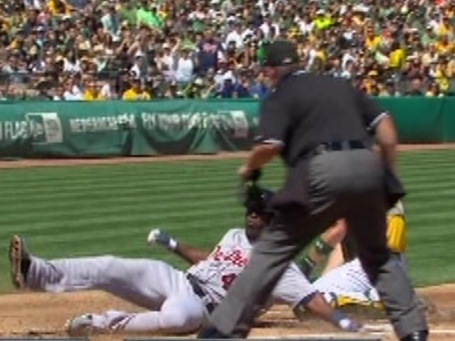 Prince Fielder is the anti-Carlos Quentin. Fielder was hit by Jarrod Parker with a rising, inside fastball, clipping the big man on the elbow. He didn't charge the mound or make a huge scene. Fielder did hang around the plate for a few moments, chatting up both catcher Derek Norris and home plate umpire Sam Holbrook, making sure it wasn't a purpose pitch. Considering how hard Fielder has been hitting the A's, no one would have been surprised if it had been.

Rod Allen put words in Fielder's mouth in the aftermath of the hit-by-pitch: "I know I'm hot, but I'm not gonna have any of that!"

Mario Impemba with the understatement of the day: "The Tigers just need to sort out the pen a little bit."

If you ever get depressed, cheer yourself up by remembering you aren't a Cubs fan.

The Cubs have set a major-league record with 5 wild pitches in an inning against the Giants.

The camera on Miguel Cabrera in the 5th, Rod Allen turned into a poet: "When the leaves turn brown, he'll be wearin' the batting crown." I can image Mario Impemba rolling his eyes in the booth.

After Seth Smith turned a Torii Hunter single into a triple, Ryan Raburn has become a verb.

This is to "Raburn" a fly ball: 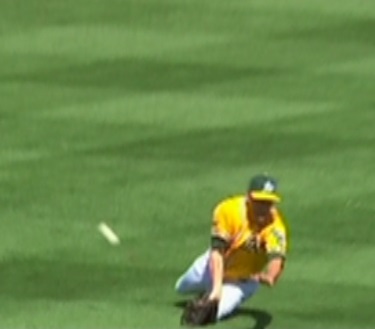 This match made in Hell/Heaven needs to happen.

I don't care which sport it happens in but I want to see a game called by Rod Allen and Mickey Redmond together.

A's fans are young and angry, as shown by this kid who was handed a Tigers foul ball by a friendly fan. He pulls a Henry Rowengartner, throwing it into the lower deck, sending Rod and Mario into hysterics and upsetting dad. 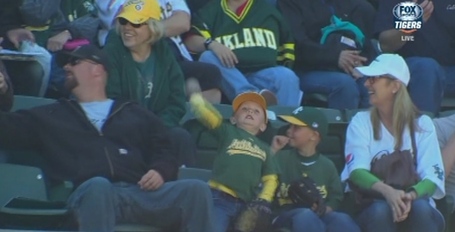 A still laughing Rod Allen on the angry young A's fan and his brother a few minutes later: "They're still in time out!" 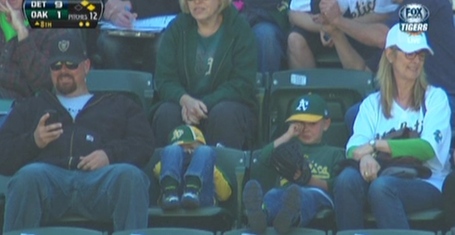 But there was a happy ending to the drama, A's officials coming through with baseballs for everybody! Rob has much more on the hilarity which ensued.

Leyland emptied the bench late. Don Kelly took over for Hunter in the 8th, Ramon Santiago and Matt Tuiasosopo playing behind Porcello in the 9th.

Austin Jackson: 4-for-5, HR, 3 RBI. If the early weeks of the season are any indication, we're witnessing Jackson making the leap from good to great.

Torii Hunter: 3-for-5, 2 R, RBI. Hunter is well on his way to becoming to the Tigers what Chris Chelios was to the Red Wings -- a despised rival who becomes beloved.

Not even going to worry about it. Love is all around!

GAME 11 PLAYER OF THE GAME:

The hotter than Hades Prince Fielder carries the BYB PotG vote with 54%.