Behind Enemy Lines: Getting to know the new Lookout Landing

Jon Shields, the new head honcho at Lookout Landing, answered a few questions about the Seattle Mariners prior to tomorrow's series opener.

Share All sharing options for: Behind Enemy Lines: Getting to know the new Lookout Landing

The legendary Jeff Sullivan may no longer be in charge, but Lookout Landing is still the best Seattle Mariners site in the business and one of the best baseball blogs on the internet. New big boss Jon Shields was kind enough to answer a few questions we had about the Mariners before this week's three-game series.

1. We know how good Felix Hernandez is (more on him later), but what about Hisashi Iwakuma? His 2012 numbers look pretty good and he has been the Mariners' best starter so far in 2013. How good is he?

Hisashi Iwakuma has been been a pleasant surprise for an organization that needed one. He's been better than anyone could have reasonably expected by performing as a legitimate number-two starter and looking downright dominant at times. [Ed.: like Friday against the Rangers.]

He pounds the zone with a vast repertoire that includes a heavy sinker/shuuto and tough splitter, as well as a four-seamer that can reach 93, a slider, and the occasional curveball. His splitter is a legitimate swing-and-miss pitch but he also generates whiffs by elevating his four-seamer following a heavy dose of sinkers and splits. 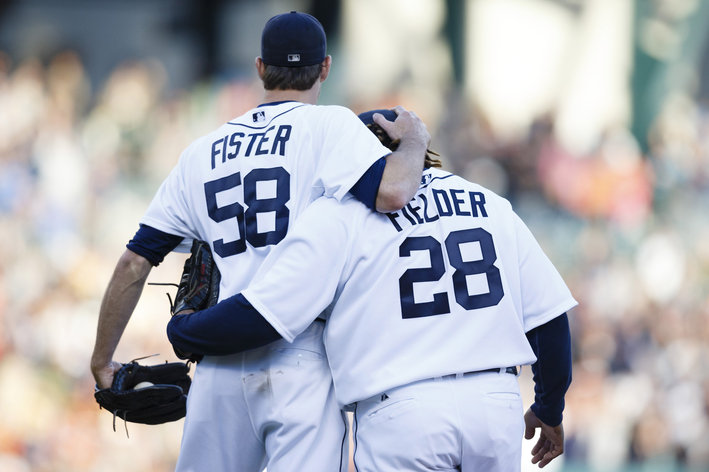 I returned the favor and answered a few questions about our boys for the Lookout Landing readers over at their site.

His command has been impeccable through three starts this season and hitters have looked completely off-balance. He's been a lot of fun to watch when pitching with good pace. If the Tigers' powerhouse lineup begins getting to him you'll probably see him sloooooow waaaaaay doooooown between pitches.

2. You may have already heard, but our bullpen sucks. We hear yours is really good so far, but us ignorant east-coasters haven't heard of anyone besides former Tiger Charlie Furbush. Who are a few of the other guys we're going to see this series?

Tom Wilhelmsen is the Mariner closer and one of the more compelling players on the team due to his unusual backstory, goofy personality, high-90s heat, and devastating curveball.

I was a Brandon League fanboy in 2010-2011 but it was against the Tigers that Wilhelmsen won me over and became my favorite Mariner reliever. It was April 24, 2012. Wilhelmsen came in to protect a two-run Mariner lead in the 8th, but started off the inning by surrendering singles to Miguel Cabrera and Prince Fielder. Cabrera and Fielder wound up in scoring position with one out and Jhonny Peralta at the plate. Wilhelmsen buckled down.

Whoops! My knees buckled in time with Peralta's and I fell in love.

The Mariners back Wilhelmsen up with two other young fireballing righties in Stephen Pryor (whose status is unknown at the time of this writing due to a pulled lat) and Carter Capps. The 22-year-old Capps is interesting to watch due to his extreme third base side release point and occasionally wicked power-slurve, but can struggle with his command. When the Mariners need a different look, they go to Furbush or the resurgent Oliver Perez from the left side.

3. It's early, but have the fence changes at Safeco Field made an impact yet?

The new dimensions have come into play a few times during the opening homestand but the stadium doesn't seem to play dramatically different. Hitters are still smoking balls that appear off the bat to be heading 10 rows deep but wind up well short of the warning track. Part of this could be the chilly game-time temperatures, so it will be interesting to see if gameplay changes come July.

4. The M's have struggled offensively in recent years, but seem to be off to a good start in 2013. Which player is the key to keeping the offense afloat this year?

The Mariners don't have any superstars in their lineup, so any success will be the result of well-distributed offensive contributions.

Michael Morse brings home run hitting ability not seen in Seattle for several years. He began the season on a tear, bashing six home runs over an eight game stretch. Unfortunately, he has missed the past three games with a fractured pinky. He is expected to to play in this series instead of allowing the finger to fully heal. Franklin Gutierrez is as healthy as he's been in years and has been celebrating his relative well-being (he's still missed the past two games with tightness in his legs) by crushing pitches to all fields. We saw glimpses of what kind of offensive player Gutierrez could be during his breakout 2009 campaign, but he hasn't had the health required to build on that performance until now (or so we hope). Michael Saunders, who won't appear in this series due to a sprained shoulder suffered in a wall collision, has been another difference-maker in the lineup so far, looking like a good bet to build on his resurgent 2012.

With these three injured, the Mariners ran out a starting outfield of Raul Ibanez, Endy Chavez and Jason Bay, which obviously isn't ideal unless the year is 2006. (Granted, Bay has looked better than expected thus far).

Kendrys Morales was the other big offseason addition (alongside Morse) and has been an on-base machine. On the other side of the spectrum, the trio of once-highly touted prospects -- Jesus Montero, Dustin Ackley, Justin Smoak -- have done little to show that they're capable of living up to past expectations.

Once again, thanks to Jon for the insight. Be sure to check out Lookout Landing all season long for Mariners coverage.