Doug Fister makes his third start of the season against his former team tonight as the Tigers start a three game series against the Seattle Mariners.

Share All sharing options for: Game 13 Preview: Tigers at Mariners

The Mariners acquired Harang from the Colorado Rockies last week after the Rockies designated him for assignment. The Rockies had traded for Harang four days earlier. Jon Garland, who pitched for the Mariners during Spring Training, is now in the Rockies' rotation. I don't understand baseball sometimes.

Here's the part where I quote Lookout Landing for the same stuff about Harang that I was going to pull off of Fangraphs anyway:

Harang is a shadow of the pitcher he was from 2005-2007, when he was among the best right-handers in baseball. Last season, in 31 starts for the Dodgers, Harang posted a 3.61/4.14/4.91 pitcher slash -- ERA, FIP, and xFIP -- over 180 innings. While impressive, last year's ERA and FIP ratios probably overstate his talent at this point: his 6.54 strikes out per nine innings ratio was nearly a career low, and Dodger Stadium undoubtedly helped the fly ball pitcher suppress his home run rate: Harang's 6.3% HR/FB ratio last season was significantly lower than his 10.6% career figure in the category. Some regression in this area would likely make him more of a No.4 or No.5 starter than a mid-rotation piece.

Harang was downright awful in Spring Training for the Dodgers, allowing 17 runs in 18 2/3 innings. This isn't much better than Blake Beavan, who allowed 10 runs in 10 2/3 innings for the Mariners in his two starts this year. Beavan is now in the bullpen, and about as popular among Mariners fans as Brayan Villarreal is in Detroit at the moment. 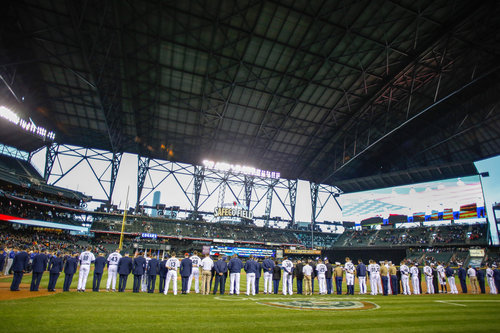 Our conversation with Lookout Landing's Jon Shields on the state of the Mariners' 2013 season so far.

Harang relied primarily on a fastball-slider combination against right-handed hitters last season, throwing those two pitches almost 90% of the time. He was a completely different pitcher against left-handers, mixing five different pitches. In addition to the four-seam fastball and slider, Harang threw a sinker, curveball, and changeup. The increased arsenal didn't work particularly well, however, as lefties hit .260/.360/.401 off Harang in 2012. He also walked nearly as many lefties (54) as he struck out (60).

Fister was back to his usual, uber-efficient self in his last start against the Toronto Blue Jays. He needed 107 (!) pitches to get through eight innings, allowing just one earned run. It should probably be said that the run could have been prevented had Andy Dirks not misplayed a fly ball, but who's counting? Regardless, Fister relied primarily on a fastball/changeup combination during the game, peppering the third base side of the strike zone. 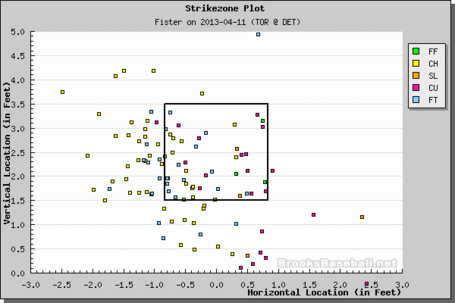 I was a bit concerned after seeing that Fister threw 60% changeups to left-handed hitters, but after watching the game, I think PitchFX had trouble differentiating between his two-seamer and changeup. His fastball velocity was a bit lower than usual, which isn't surprising given the weather that day.

Injuries in the outfield

On Opening Day, the Mariners played Franklin Gutierrez, Michael Morse, and Michael Saunders in the outfield. Two weeks -- and a pulled groin, broken pinky, and shoulder-meets-wall nastiness, respectively -- later, their starting outfield is Endy Chavez, Jason Bay, and Raul Ibanez. Gutierrez, Morse, and Saunders have combined for 11 home runs and 24 RBI on the year, while the current guys have two dingers and six RBI to their collective names. To be fair, Chavez only has 12 plate appearances on the season, but you get the point. Add in the fact that the starting infield -- Justin Smoak, Dustin Ackley, Brendan Ryan, and Kyle Seager -- is hitting .180, and it looks like the Tigers are coming into town at the opportune time.

This will be Fister's second start against the Mariners since coming to Detroit in 2011, and if the last one is any indication, the Mariners' offense is in trouble tonight. Dougie Fresh was lights out, allowing just four hits in seven scoreless innings. For those that don't remember, this was that weird game where Octavio Dotel was the baseball equivalent of the Price is Right fail horn and Ryan Raburn got a rare "I see you" from Fox Sports Detroit's Rod Allen for a solid defensive play. Sadly, none of the above occurrences would be surprising this evening -- minus the utter shock of seeing our second baseman make a good play, that is. I see you, Infante.