Tigers 6, Mariners 2: Doug Fister shows Mariners what could have been

Miguel Cabrera, Austin Jackson lead the Tigers' offense while Doug Fister and the bullpen keep the Mariners at bay in a 6-2 victory.

Share All sharing options for: Tigers 6, Mariners 2: Doug Fister shows Mariners what could have been

Doug Fister (3-0) was credited with the victory, allowing two runs on four hits, striking out five in seven innings. Aaron Harang (0-1), the first of five Mariners pitchers, was tagged for the loss, allowing three runs over five innings.

Miguel Cabrera led the Tigers' 12 hit attack with three hits and four RBI, including his second home run of the season. Austin Jackson and Torii Hunter added a pair of hits each for the winners.

In the past, west coast trips would be like entering the Twilight Zone for the Tigers. Weird things would go down, twist endings happened, all usually bad. There's been no sign of Rod Serling over the past three games out west, all Tigers' victories.

Jackson reaching base to lead off a game is becoming commonplace. He did it again tonight, taking an Aaron Harang 3-2 fastball to the opposite field, finding the gap in right center for a stand-up triple. Jackson would trot home on Miguel Cabrera's single, his 14th RBI of the young season. Tigers were up 1-0 before you could finish your first late night cup of joe.

Fister was working fast and furious, setting the first nine Mariners down in order.

Even when Victor Martinez gets a hit, he's unlucky. He missed going yard by inches in the third, ending up with a lead-off double. But the next three Tigers would go down in order, unable to extend their 1-0 lead.

Fister got the first out of the fourth before Kyle Seager broke up any thoughts of a no-hitter, sending a drive over the head of Jackson in dead center for a double. The shutout went bye-bye as well when Kendrys Morales found the gap in right center for an RBI double, tying the game at 1-1.

Michael Morse followed with an RBI single, ripping a Fister fastball back up the middle. A good throw would have easily pegged Morales at the plate, but Jackson's throw was well up the line. After ten consecutive outs, three straight hits had given the Mariners a 2-1 lead.

The Tigers got the two runs back in the following half-inning, taking the lead back at 3-2. After Hunter singled off Harang with two out, Cabrera hit another of his signature opposite-field home runs, clearing the wall in right center. It was second time Cabrera has gone yard in 2013, raising his RBI total to 16.

Given the lead, Fister shook off the speed bump which was the fourth. He went back to efficiently setting down the Mariners in order with an 11-pitch fifth.

Jackson manufactured the Tigers fourth run in the seventh. He singled with one out. Jackson stole second as Hunter struck out, then scored on Cabrera's third RBI hit of the night (his 17th of the season), a single to left.

With Al Alburquerque and Phil Coke warming up, Fister started the seventh with a 4-2 lead and at 96 pitches. After having set down eight Mariners in a row, Justin Smoak singled with one out. Fister ended his night in style, Kelly Shoppach striking out, Dustin Ackley grounding out.

Martinez singled (his third hit) to lead off the eighth against the fourth Mariners' pitcher of the night, Bobby LaFromboise. Jhonny Peralta then lined a double into the left-field corner, Martinez holding at third base with no one out.

Deciding it was time to earn their salary, the managers started stratergizing.

Andy Dirks pinch-ran for Martinez. but Alex Avila had an awful at bat, striking out on three pitches.

Tuiasosopo stuck out on three pitches, leaving it up to Jackson to give the Tigers an insurance run or two.

For the second time tonight, Jackson would have a wonderful at-bat despite being well down in the count. Falling behind 0-2, Jackson would battle back to a full count, ultimately drawing an RBI walk on the tenth pitch of the at-bat, pushing the Tigers' lead to 5-2. It was Jackson's sixth RBI of the season.

Lafromboise was pulled for rookie right-hander Yoervis Medina. Thrown into a bases-loaded situation in his MLB debut, Medina walked Hunter to force in a run, the Tigers now up 6-2. Hunter now has nine RBI on the year.

Medina would go to a full count on Cabrera, before catching the reigning MVP looking on a breaking ball. Regardless, the Tigers were able to tack on a pair of insurance runs, taking a four-run lead into the bottom of the eighth.

Alburquerque took over for Fister in the eighth. His slider was working to perfection, setting the Mariners down in order, striking out two.

Joaquin Benoit answered the bullpen phone, getting the ball for the ninth inning in a non-save situation. Three quick outs later, the Tigers had locked down their eighth win of the season.

The first place in the AL Central Tigers win their third consecutive game and improve to 8-5 on the season. The Mariners fall to 6-9, third in the AL West.

The teams will face off again on Wednesday night in the second meeting of their three game series.

Just one big recap tonight, it's late in SE MI!

Despite yesterday being Jackie Robinson Day in MLB, the Tigers and Mariners were off, so both teams wore the number 42 in Robinson's honor tonight. It's the thought that counts.

Andy Dirks was kept out of tonight's lineup with what is being reported as a sore knee. Octavio Dotel was unavailable out of the bullpen, still nursing an elbow problem. Rick Porcello was available to pitch in relief, if needed.

There were all kinds of technical difficulties tonight. MLB.TV video and audio was down for a significant amount of time. FSD's Fox Box did not have anything other than innings, runs, outs and runners-on-base. No counts, batter or pitch variety. Once you have the cool toys, you miss them when they aren't there.

After the game, FSD's Mario Impemba confirmed it was technical difficulties:

No balls and strikes or pitch count tonight because of technical problems. We weren't trying to make life miserable for ya'll.

I thought yelling at Twitter would make me feel better. But alas, I'm still without a Tigers feed or audio. Grrrrr

And after it started working...

Austin Jackson led off the game with an undeniably great at-bat. After falling behind in the count 0-2 to Aaron Harang, Jackson battled back to a full count, then hit a liner into the gap in right center for a standup triple. He would score on a Miguel Cabrera single. At-bats don't get much better than that.

Our own Phil Coke's Brain gives sage advice on how to handle Jackson.

No one talk to, look at, or interfere with Austin Jackson. Just let him rake.

The Tigers have scored first in nine of 13 games this season.

Remember when Raul Ibanez was the toast of New York and getting MVP votes?

Mariners right fielder Michael Morse ran after Victor Martinez's fourth inning drive in the gap like he would have run out a bouncer to the pitcher. He was expecting it to clear the fence ... which it didn't.

In the fourth inning, Fister gave up three straight hits, allowing a pair of runs, despite being ahead in the count on each batter: Kyle Seager 1-2, Kendrys Morales 0-2, Morse 1-2.

Cabrera's fifth inning home run was his first in Seattle since 2010.

The only player received in the Fister trade who is still on the Mariners' roster, left-hander Charlie Furbush, took the mound in the sixth. Fister versus Furbush and GET YOUR MINDS OUT OF THE GUTTER.

Cue "We won the trade" comments on social media. No damn kidding.

Can't help but recall Leyland's description of Furbush's style as "kind of slingy" every time I see him throw a pitch.

I look at the Mariners' lineup and all I can think of is, "They don't have room for Casper Wells? Really?"

Including tonight, Cabrera has 44 career games with four RBI or more. This was his second of the season, as many as he had in 2012.

The Mariners win the oddball name contest by using the following pitchers in order: Harang, Furbush, Beavan, Lafromboise, (Funky Cold) Medina.. Don't they have a Smith or Jones? Actually, they don't. 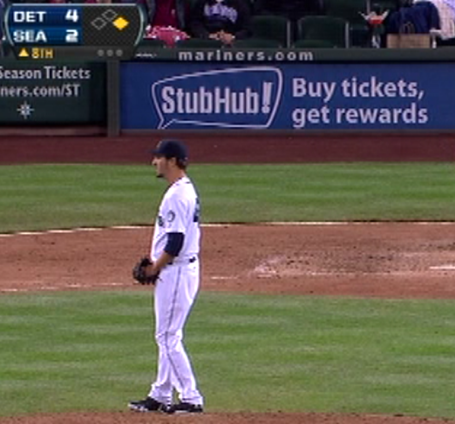 By striking out in the eighth, Alex Avila is now 1-15 with runners in scoring position.

Mariners catcher Kelly Shoppach added to the odd vibe of the game in the ninth, spiking the ball approximately five feet in front of the plate while trying to throw out Dirks stealing. Even Denard Robinson laughed at the futility of the throw.

Miguel Cabrera: Thanks to his four RBI, Cabrera was the Tigers' entire offense until the eighth inning.

Doug Fister: Twirled a quality start as Mariners fans watched what could have been theirs.

Austin Jackson: Had the two best at-bats of the game in the first and eighth innings, both leading to runs.

Victor Martinez: Had been hitting into hard luck all season, finally broke through with a three-hit night.

Prince Fielder: The hottest hitter in baseball was overdue for an off night. Four K's is definitely an off night.

GAME 12 PLAYER OF THE GAME: