Q&A with Jim Nelle: The Most Interesting Tigers Fan in the World

We connect with TIGERMAN, also known as the Tiger Suit Guy, Jim Nelle.

Share All sharing options for: Q&A with Jim Nelle: The Most Interesting Tigers Fan in the World

We've all seen him behind home plate during Tigers games. He's TIGERMAN, rocking the gorgeous tiger print suit and studly sunglasses. I recently wondered aloud, "Who the heck is Tiger Suit Guy?"

It seemed like everyone has had an encounter with TIGERMAN. People were eager to share a story about him, and I heard over and over what a cool guy he was. I had to see if I could connect with him myself. It turns out his name is Jim Nelle, and he lives in Iowa and owns a very successful roofing business. I was lucky enough to track him down, and he was gracious enough to answer some questions and even send some photos.

PCB: When and how did the Tiger suit get started? What inspires a person to create such a terrific look?

TIGERMAN: I think the first time I wore it was Opening Day four years ago. I just thought it was a great way to cheer on the TIGERS.

PCB: I'm not going to ask you to divulge any trade secrets, but how did you obtain the suit? Do you have more than one?

TIGERMAN: I have three suits, a friend made them for me. One is bad luck, wore it to four games, TIGERS lost all four.

PCB: You've been spotted in Kansas City, Minnesota and Detroit. Will you tell us a little about your baseball travels?

PCB: I imagine you are committed to the suit, as you should be. Does the weather affect your look? What happens when it is in the 30s or in the 90s?

TIGERMAN: I wear the suit in all weather. The hottest was last year in Kansas City, 105. The coldest was this year in Minnesota, low 30s (I did wear a face mask some of the time).

PCB: The suit is obviously an attention grabber. Has it opened up any doors for you? Any good stories you can share?

TIGERMAN: I‘ve had drinks and hung out with some of the players.

PCB: Now do the ladies respond to the suit?

TIGERMAN: Women love the suit, I take a lot of pics with people. Seems like everyone has has seen me on TV.

PCB: Say I live in Iowa or eastern Nebraska, who would I turn to for a quality roof installed by true professionals?

TIGERMAN: My roofing company is very large, I’m in Michigan, Indian, Missouri, Iowa and Nebraska, plan to be in Ohio, Illinois and Colorado by this year. I heard from a lot of people at the game game that you said I was in a motorcycle accident, sued and that’s how I got my money, not true, I worked my ass off all my life to earn it -- 80 to 100 hours per week. Now that I’m older I can enjoy it. I plan to be at all the World Series games this year and see the TIGERS win!!!!!

**I was embarrassed and apologized profusely to Mr. Nelle for the misunderstanding, explaining that the story was just a joke playing off the mystery of who he was. I hope we can be cool and share a drink some day**

I suspect there are many, many more stories to be told by The Most Interesting Tigers Fan in the World. You'll just have to catch up with him yourself sometime. To give you a taste, here are some photos of Mr. Nelle's adventures. 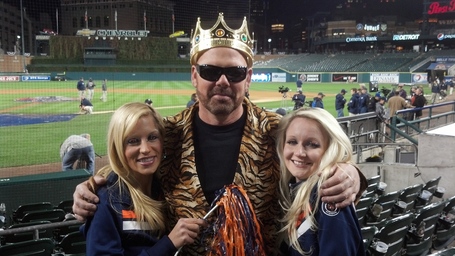 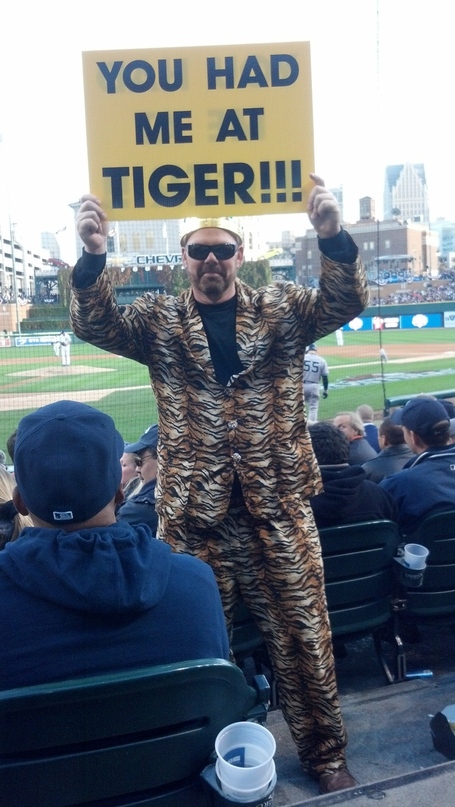 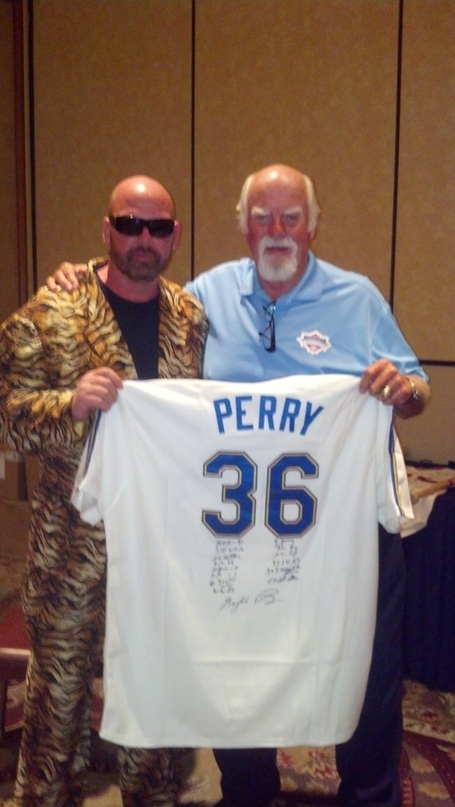 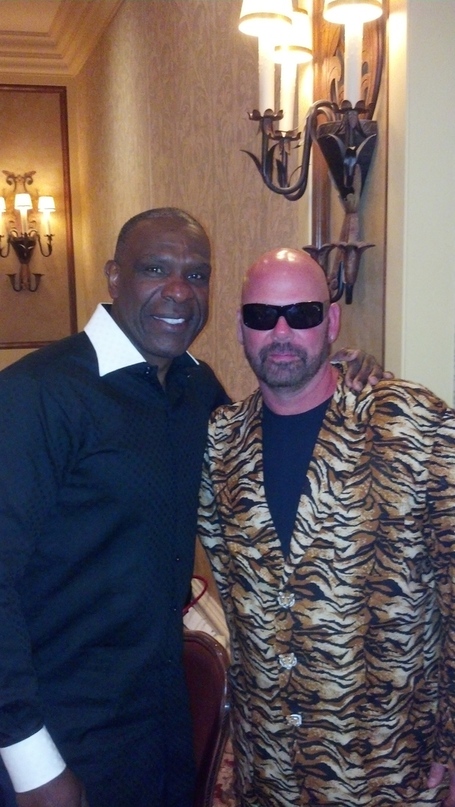 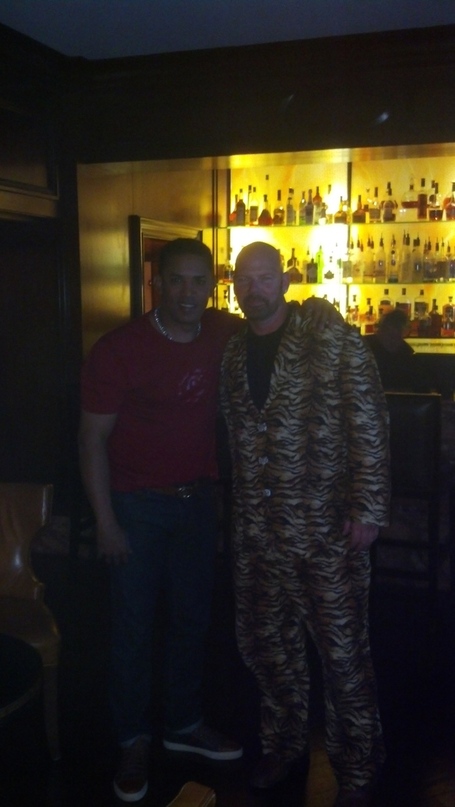 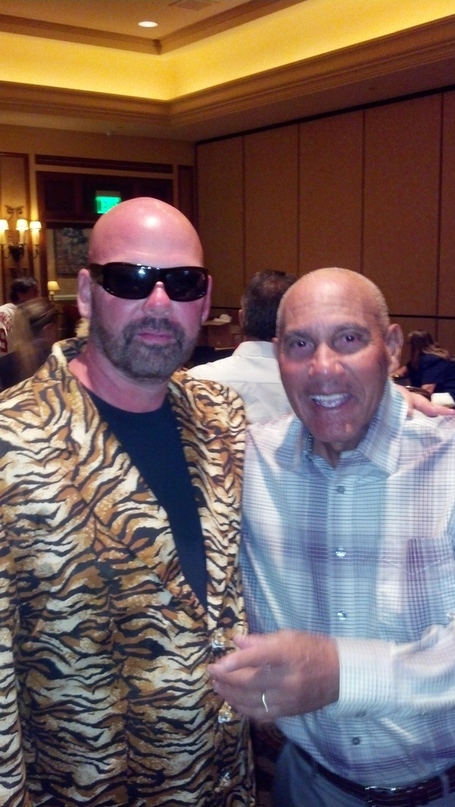 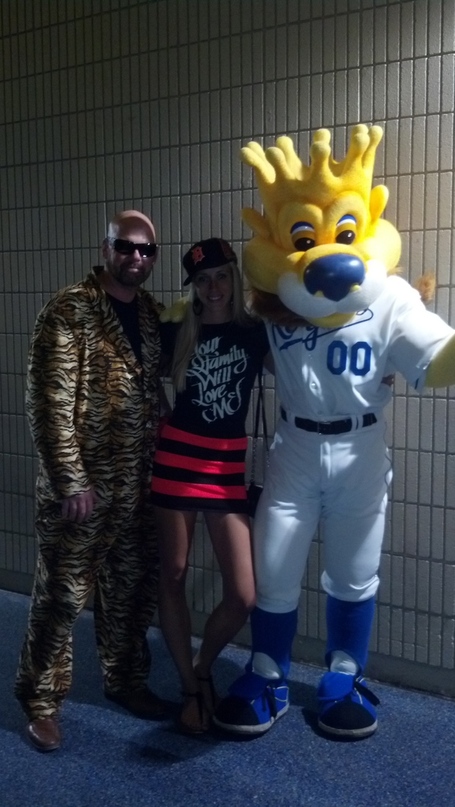 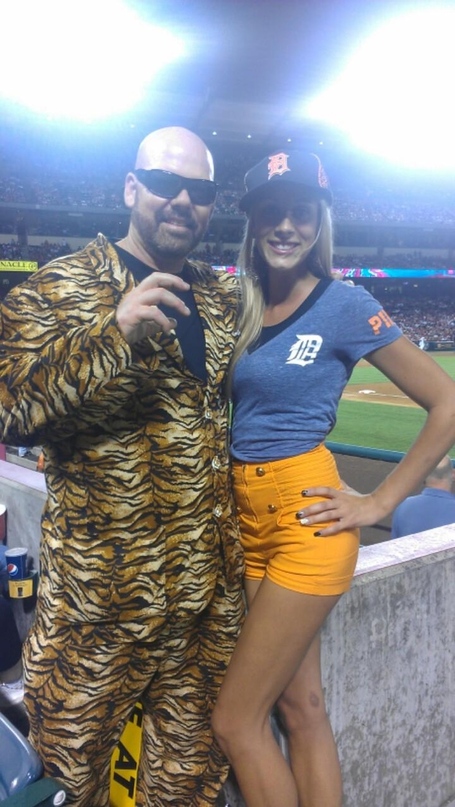 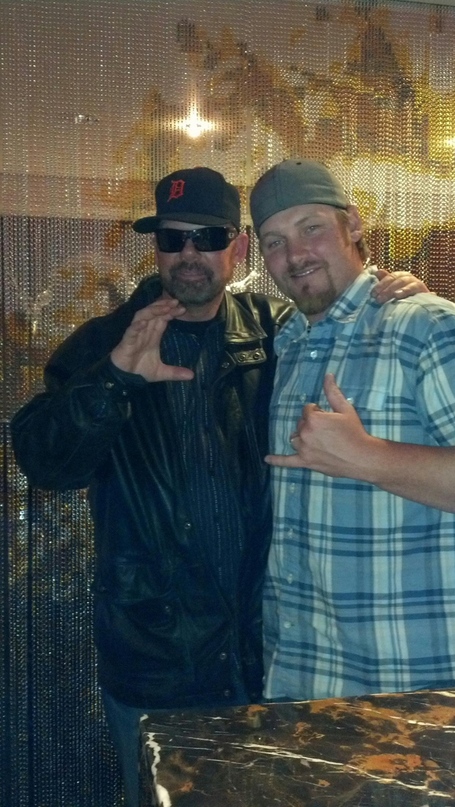 Editor's note: The questions and responses were edited slightly to our BYB style but the content of the responses was not changed in any way.