The Tigers executed a long relay throw to near-perfection last night, throwing out Justin Smoak at the plate to win a 2-1 game in 14 innings.

Alright, now that I have had certain luxuries like sleep and coffee, let's break this down.

Situation: bottom of the 14th inning, runner on first, two outs. Joaquin Benoit hangs an 0-2 fastball to Mariners second baseman Dustin Ackley, who drills it into the right field corner for extra bases. Torii Hunter gets to the ball and gets it back to the infield very quickly, making a pretty accurate throw for the situation. However, he airmails Omar Infante, the first cutoff man on the play.

Here's one of the keys to the play. On long relay plays such as this, one player is designated as the "second" cutoff man. His entire role is for plays like this, where the outfielder rushes and overthrows the first cutoff man. 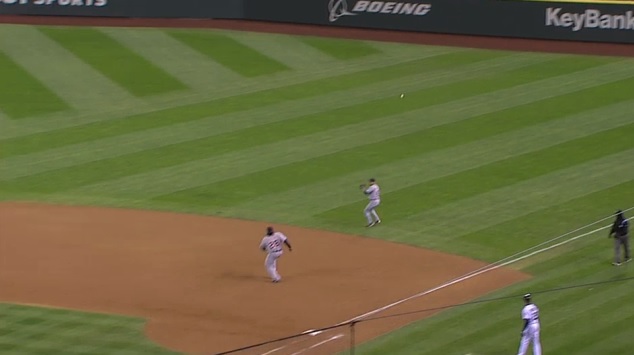 Prince Fielder is the second cutoff man on the play, and fills that role to perfection. He turns and makes a semi-accurate throw to Brayan Pena, giving Pena time to brace himself for impact.

Pena is somehow able to hang onto the baseball after being run over by a linebacker, and the Tigers win 2-1.

Some fans may quibble over the decision to send Justin Smoak from third on that play, but I thought Mariners third base coach Jeff Datz made the right choice. As we see here, there are so many components to a relay throw such as this one that the probability of Smoak scoring here is much higher than the probability of him scoring from third with Robert Andino at the plate in the next at-bat.

And no, that does not absolve me from complaining the next time a Tigers player gets thrown out at the plate.