Justin Verlander struck out 12 and allowed just two runs in seven innings, but the Tigers were unable to capitalize and failed to complete a sweet of the Mariners Thursday.

Share All sharing options for: Mariners 2, Tigers 0: Justin Verlander gets no run support

It took the Tigers 14 innings to score two runs Wednesday. So maybe it shouldn't be a surprise that nine innings were not enough to get on the board Thursday.

Hisashi Iwakuma and two Mariners relievers shut the Tigers' offense down and limited Detroit to just five hits and two walks for the game.

Justin Verlander allowed two runs in the seventh -- and went the deepest into his pitch count yet this season while striking out 12 -- in the loss. After Verlander struck out the first two batters of the inning, Seattle sandwiched a double by Kyle Seager between singles by Robert Andino and Endy Chavez to account for the runs. JV allowed nine hits.

So, we mark the second opportunity in five series Detroit couldn't win the final game for a sweep. Interesting enough, the Yankees shut out the Tigers in the earlier attempt, too. The pessimist blows the Bronx cheer. The optimist would point out the Tigers have won every series since the season-opener in Minnesota. Do that most of the time and you're going to finish the year with a pretty nice record.

The Tigers now head south to Anaheim for the final series on the West Coast this year. (What great words to write in mid-April!) 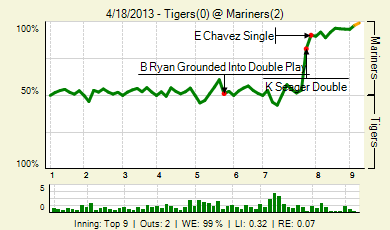