After putting together an excellent spring, Drew Smyly struggled in his first outing of the regular season. Was this a one-time issue, or is there reason to be concerned about the young lefty?

In case you haven't heard yet, Drew Smyly wasn't very good in yesterday's relief appearance. In just 1 1/3 innings, Smyly threw 48 pitches and gave up both of the runs scored by the Minnesota Twins in the Tigers' 4-2 Opening Day victory.

The most concerning thing about Smyly's appearance is his lack of command. After retiring the first two batters in order (more on that later), Smyly only retired two of the next eight batters he faced. He threw just 18 strikes, with most of his pitches missing down in the zone. The picture below is Smyly's location chart for the game. 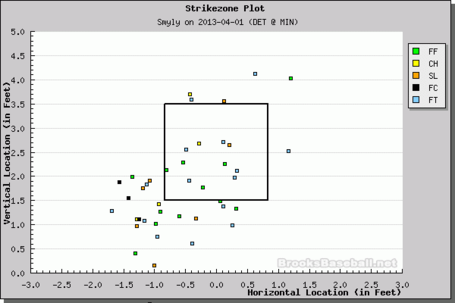 As you can see by the mess of multi-colored dots south of the strike zone, Smyly had trouble locating all of his pitches. Usually, missing location this badly is due to one of two things: faulty mechanics or not having a "feel" for the baseball. Since we can really only track one of these, let's take a look at Smyly's mechanics.

First, here are his release points from yesterday's start. 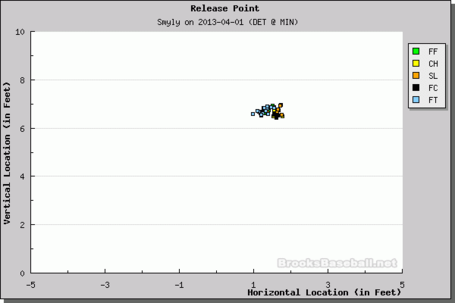 This cluster, while seemingly off-kilter, is a pretty consistent pattern, especially for a left-handed pitcher. Over the course of the 2012 season, his release points were of similar consistency. Nothing to worry about here, but let's take a look at his overall delivery.

As you can see, Smyly misses his location, resulting in ball four to Brian Dozier in the top of the sixth inning. To compare, I selected a pitch from Smyly's start at Target Field last season so that we could get a similar camera angle of his delivery. To be consistent, I went with a pitch from the stretch to Dozier.

As you can see, the pitching motion is nearly identical in both instances -- though he shows better balance after the pitch in the 2012 version -- as were his release points. (Also, I'm digging the upgraded graphics from Fox Sports). Unless there's something small that I'm missing, Smyly's mechanics weren't what failed him during yesterday's meltdown.

With temperatures sitting in the 20s during the game -- not to mention a stiff breeze at field level -- it seems like Smyly's troubles were mostly weather-related. Given that he retired the first two hitters he faced in short order, it seems like he lost his feel for the baseball after being on the mound for a little while, which would explain the inability to throw any of his pitches for a strike consistently.

In Smyly's defense, he wasn't the only Tigers pitcher to struggle with his command yesterday. Justin Verlander only threw 54 of his 91 pitches for strikes, while Joaquin Benoit only threw eight strikes in 18 pitches in the top of the 8th inning. Had Andy Dirks not made a nice running catch on a Joe Mauer fly ball, the Twins may have gotten back into the game. Neither Al Alburquerque nor Phil Coke had command issues during their short outings, but I'd imagine that we would have seen a similar drop-off had they been on the mound for more than a couple batters apiece.

So, in short, there doesn't seem to be anything wrong with Drew Smyly despite what can only be described as a rough outing on Opening Day.