Why doesn't Comerica Park have any special cheering sections? It's time for fans to take matters into their own hands.

Today Drew Davison with the Fort Worth Star-Telegram shared this on his blog:

Yu Darvish will have his own cheering section for every home start he makes this season.

The Rangers, in a partnership with Kia Motors America, have created the "Kia Yuniverse," located in sections 201-208. Fans with tickets in those sections on nights Darvish start will receive a T-shirt and K-cards that are in yellow and black.

But Yu isn't the only one with a personalized cheering section. In Seattle they have the "Kings Court" where fans can sit in a special section and receive a special t-shirt and 'K' card.

Those sections are fun and all, but in both cases the club is organizing it and fans just fall in line. Shoot, Yu's section even has its own corporate sponsor!

My favorite cheering sections are the ones that rise up organically. Remember when Randy Wolf pitched in Philly and they had the Wolfpack? They made a Wolfpack fun even before Alan from the Hangover popped up. It was just like 8 guys with wolf masks doing a silly dance after each strikeout. It was perfect. In fact, when one of the members of the the Wolfpack died tragically Randy Wolf went to the funeral.

There are some players who are better to adopt than others. First, starting pitchers are the best option. Having a group out there every single day would be tiresome. Having the group show up only ever fifth day makes it seems like a special occasion. Two, it can't be one of the superstars. Those guys have thousands of people wearing their jersey already and get plenty of recognition.

In 2007 Jair Jurrjens was a Tiger and a golden opportunity presented itself. At his starts people could have gathered in a big group and sat in some otherwise unoccupied section of Comerica (that was an option when Jair was still with the club) and dressed up in scrubs and medical masks. Boom! Jurrjens' Surgeons. It would have been great. Fans would wave giant paper-mache scalpels and cardboard cutouts of internal organs with big 'K's written on them. A missed opportunity to be sure.

Are there any good options for a cheering group today?

Sure, but you are going to need one of these: 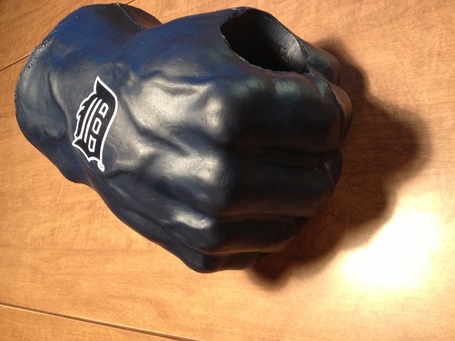 So, a group gathers at the Joe Louis fist an hour before game time. Equipped with their foam fists and a canned beverages, Fister's Fisters march the .8 miles to Comerica Park... 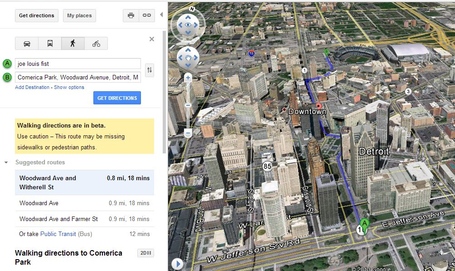 ..all the while they are shouting pro-Fister slogans such as:

How about Porcello's Bordello? A bunch of women (okay, sure, guys too) buy a block of seats together and dress up like old-timey women of ill-repute. You know, something Old Hoss Radbourn would be really into. Nothing would show Rick your support like wearing a ruffled dress like a western saloon dancer and doing the can-can every time he strikes someone out.

Good luck finding a corporate sponsor for that mess.