Detroit's offensive -- and a bit of defensive -- ineptitude continued Friday in Anaheim.

Many of you may not remember the last time the Tigers scored a run before the ninth inning Friday. That's because it came past two in the morning on Wednesday night, and you were probably asleep. Since then the Tigers managed to score just one run in eight innings, and including Wednesday's game just three runs in 32 innings.

Detroit's only run came with two outs in the ninth when Miguel Cabrera drove in Torii Hunter. The pair combined to go 5-for-8 for the game.

According to research done by Fox Sports Detroit, the last regular-season back-to-back shutouts of Detroit occurred in April 2008. So, the Tigers avoided that anyway. Meh.

The depth of the problem can be mined in daylight, suffice it to say the stars are struggling as much as the role players. Prince Fielder, for instance, has gone 0-for-5, 0-for-6, 1-for-4 and 0-for-4 in his last four games. Friday he grounded into a double play in the first inning with two on, then again in the seventh with bases loaded. If he drops in a hit instead of a GIDP ... everything is different. But, alas and alack, he didn't.

The curiosity in this game, though, was not that the Tigers struggled to score, but that they had so many opportunities to score and didn't get it done. Angels starter Tommy Hanson was far from crisp, offering four walks and six hits. The rest of the Halos' bullpen allowed another three hits and pair of walks. Our old friend They Threatened But Did Not Score reared its ugly head repeatedly.

Anibal Sanchez pitched well enough, though he found himself in frequent trouble allowing 11 hits of his own. But he pitched into the seventh and allowed two earned runs (three total) so I'm going to go ahead and absolve him here.

The game fell apart for Detroit with Octavio Dotel and Brayan Villarreal on the mound in the eighth-- unsurprisingly. Dotel offered up five runs -- though an embarrassing play when pinch-hitter-turned-left-fielder Matt Tuiasosopo and center fielder Austin Jackson both arrived near the left-center wall just in time to watch the ball fall between them. But let's not blame a fielding problem here. Batters were smacking the ball to the tune of two doubles and a triple. I don't want to put too much blame on Villarreal here -- he did only face two batters. But he didn't help matters when Albert Pujols singled.

Welp, this Tigers lineup is going to hit more often than not, even though it might not feel like it after the past three games. But this West Coast swing isn't nearly as fun as it seemed a few days ago, is it? 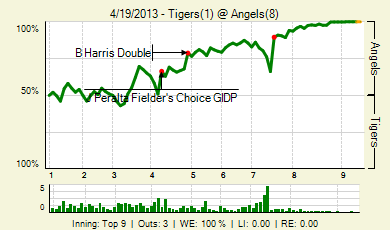