Sorry for this post being late. It's that time of semester when everything is due in about a 3 day window.

In researching the Beer of the Series for this series, I was left a little disappointed. I went out to Pasadena a few times in the last year to visit the future Mrs. rbbaker, we went to a few places, and the majority of what I saw was the NorCal and Northwest big boys and very little of the local flavor. I know California is known more for wine, but I was a little surprised at the lack of local flavor I saw. Aside from one of the honorable mentions I had, there really wasn't anything worth writing home about. I even went to a local, well stocked liquor store and looked at where every beer was made to make sure I wasn't forgetting anything.

Therefore (and since we don't play the Dodgers or Padres this year), I am making this Beer of the Series post about all of Southern California, which makes things a little easier on me. Since the San Diego area has a solid microbrew community, this made the decision a no-brainer. In honor of every sports blogger's personal crusade and attitude towards Mike Trout being the REAL MVP last season, I present to you Stone Brewing Company's Arrogant Bastard Ale. 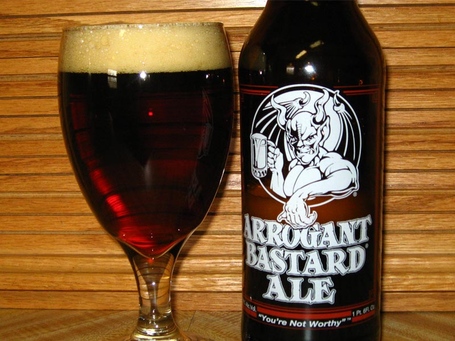 Not going to lie, this is one of my all time favorite beers ever made (appropriate, I know). It is officially classified as a Strong Ale, but it shares more in common with most IPAs: unashamed hoppiness and bold flavor. It starts off smooth with a touch of subtle maltiness but the aggressive hop and alcohol flavors will assault your palate and not feel bad about it. Afterwards, you'll get more aggressive hoppiness, but of the pleasant citrus-y kind. At 7.2% ABV and a classified IBU figure (seriously, the IBUs are listed as classified on the website, which has some awesome merchandise and copy describing the beer), I would have a bomber of this with a burger and call it a night. Hopefully Miggy and Prince put the game out of reach of the Wonderboy All-Stars by then.