In the span of 11 hitters, what could go wrong for Rick Porcello and the Tigers, did.

The Los Angeles Angels scored nine runs in the first inning, cruising to to a 10-0 victory over the Detroit Tigers. The Angels lapping of the Tigers was capped by Mike Trout's first career grand slam, all putting the game out of reach before the game was six outs old.

Angels starter Garrett Richards (1-0) dominated the Tigers, allowing just two hits in seven innings of work. Porcello (0-2) was tagged with the loss, lasting only 2/3 of an inning while being charged with nine of 10 Angels runs.

Trout led the Angels attack with a pair of hits, including the grand slam, and four RBIs. Peter Bourjos had three hits and an RBI, Howie Kendrick chipping in with two RBIs.

For the third consecutive game, the slumping Tigers offense did little, just four hits against three Angels pitchers. It was one of those games.

Bourjos led off with an infield single, advancing to second on a wild pitch. Trout bounced a seeing eye single over the head of Porcello, Bourjos to third. Albert Pujols dribbled an RBI seeing-eye single past Peralta (who didn't dive, for whatever reason) to give the Angels a 1-0 lead.

Porcello walked Hamilton on a 3-2 pitch, loading the bases, They were soon cleared on an RBI single by Mark Trumbo which dropped in front of Torii Hunter and a hard-hit, two-RBI single up the middle by Howie Kendrick.

The Angels were up 4-0 and Porcello had yet to record an out. It was death by papercuts.

Then the inning got more ridiculous.

After Chris Iannetta grounded into a 5-4-3 double play, the worst looked to be over. Four run leads aren't insurmountable.

Porcello broke Brendan Harris' bat, but he was able to bloop an RBI single over short to plate Trumbo. Luis Jimenez's swinging bunt could not have been placed any better, the rolling to a stop down the third base line for another ridiculously insane infield single.

With death by papercuts portion of the inning concluded, Trout broke out the big guns. He cleared the bases with a grand slam to dead center, giving the Angels a 9-0 lead.

A stunned Porcello was pulled for Drew Smyly. Porcello was caught on FOX's camera looking for all the world like a shell shocked infantryman with a thousand-yard stare. 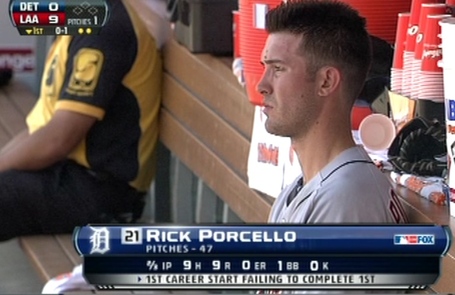 Smyly allowed a single before Hamilton ended the inning by flying out to Austin Jackson.

Thus ended one of the more miserable innings I've ever witnessed as a Tigers fan. A metric crap ton of bad luck topped by Wonderboy going yard.

I think this sums up the Tigers fan base's reaction to the inning quite well:

From the point in the game when Trout went yard, the rest of the afternoon played out with little ... actually, no ... drama. The Tigers' offense remained in stuck in neutral while the Angels were worn out from all the swings they took in the first inning.

Miguel Cabrera showed signs of life in the seventh, showing off his patented opposite-field power. He just missed a home run leading off the inning, doubling off the top of the wall in right center. It was the Tigers second hit of the game.

As for those signs of life? Cabrera was stranded, the next three Tigers going down in order. It was one of the those games.

Credit does have to go to Drew Smyly, who completely shut down the Angels, pitching into the seventh inning. After allowing a single to Trumbo with one out, he was pulled for Brayan Villarreal. After the dramatics of his past few appearances, Villarreal only needed one pitch to end the inning. Kendrick hit a comebacker to Villarreal, who turned a 1-6-3 double play.

Another threat was snuffed out in the eighth when Jhonny Peralta was doubled off second on Omar Infante's line drive to Jimenez. It was one of those games.

Villarreal reverted back to his old tricks in the eighth, walking the leadoff man, who would come around to score. The Angels pushed their lead to double figures on Bourjos' sacrifice fly, increasing an already insurmountable lead to 10-0.

The game mercifully ended on J.B. Shuck's sliding catch of Victor Martinez's liner. It was one of those games.

Despite the blowout loss, the Tigers cling to first place in the AL Central. But they have now lost three consecutive games, falling to 9-8 on the season and 4-4 on the West Coast road trip. The Angels raise their record to 6-10, but remain mired in fifth place in the AL West.

The series and road trip come to an end Sunday afternoon, the Tigers hoping to take the final game of the three-game series behind Doug Fister. C.J. Wilson will get the start for the Angels.