Deja vu? Rick Porcello's start not as bad as people are making it out to be

Last year, Rick Porcello had an awful April start against the Texas Rangers. This year, he did the same against the Los Angeles Angels, but the process was much more encouraging.

Share All sharing options for: Deja vu? Rick Porcello's start not as bad as people are making it out to be

For the second April in a row, Rick Porcello allowed nine runs in a single outing against a very good offense. However, unlike last year's horrible start against the Texas Rangers, this year's implosion against the Los Angeles Angels wasn't as bad as people are making it out to be.

Note: prepare for GIF overload. Apologies to anyone on a phone or slow computer.

Porcello's day started innocently enough, allowing weakly hit ground ball singles to Peter Bourjos and Mike Trout. Bourjos only reaches base because of his excellent speed, while Trout fights off a well-located fastball with two strikes.

Porcello then induced a couple of ugly swings from Albert Pujols before allowing another slow roller up the middle. Like others, I question why Jhonny Peralta doesn't dive here.

After walking Josh Hamilton, Porcello catches too much of the plate on his first pitches to both Mark Trumbo and Howie Kendrick, but both hitters deserve credit for being aggressive against a pitcher who just issued a walk to load the bases.

Hunter seems to be playing pretty deep on Trumbo's single, which makes sense given his immense power to all fields.

The Tigers then turned a crucial double play on a ground ball by Chris Ianetta. With light-hitting shortstop Brendan Harris at the plate, it looked like Porcello would be able to get out of the inning with a modest four-run deficit. This 2-2 curveball, ruled a strike by PitchFX, further cemented the fact that this just wasn't Porcello's day.

Then, the baseball gods twisted the knife.

Again, Bourjos only reaches here because of his excellent speed. If any of the other seven Angels hitters not named Bourjos or Trout hit that ball, it's the third out of the inning.

Then, disaster. The hanging curveball thrown to Mike Trout that ended up in the center field shrubbery for a grand slam was easily Porcello's worst pitch of the inning. Other than that, the pitches put in play by the Angels were in the lower portion of the strike zone, exactly what you are looking for if you're Porcello. 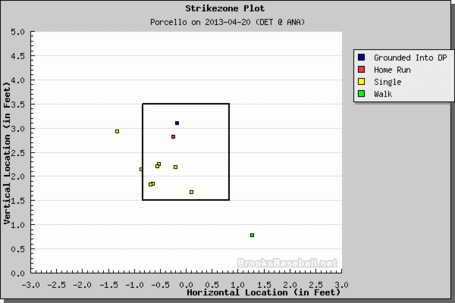 So how does this compare to Porcello's start last year against the Rangers? Here's a thousand words stating the obvious. 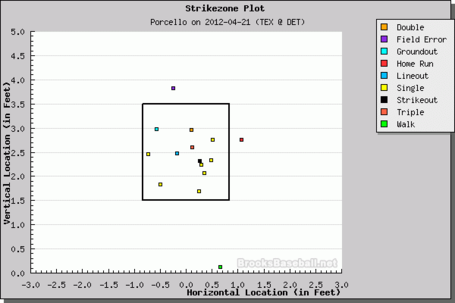 Porcello left the ball up and it was pounded into oblivion. Here are a few highlights.

Porcello hung that one badly, right in Hamilton's wheelhouse. Here's an example of the horrible slider that Porcello featured last year.

This next GIF isn't Porcello's fault, but rather is the definitive reason of why you can't just plug players into random positions.

Then, Porcello's location begins to fail him.

(Infante makes that play, but the ball was still up in the strike zone)

As you can see, Porcello's start last year against the Rangers was a product of poor pitch location, relying on a bad slider, and awful defense. His start on Saturday might not look much better in the box score, but was much more encouraging than one might expect.

Back off the ledge, Tigers fans. Rick Porcello made a few mistakes yesterday, but his overall body of work was much, much better than the awful stat line indicates.