The Tigers' California dream was turned into a three-game nightmare by the Angels.

The Mamas and The Papas most famous song is California Dreaming. It's a paean to the West Coast, with lyrics such as:

I'd be safe and warm
If I was in L.A.
California dreamin'
On such a winter's day.

After a three-game sweep by the Angels, the sky and mood in Detroit are gray. Even though the Tigers may have been warm, it was far from safe. And I would have killed for a bases-loaded walk, winter or otherwise.

The California dream turned into a three-game nightmare.

Yes, the weekend series with the Angels was brutal to watch. But there were mitigating circumstances.

Friday night, the Tigers couldn't buy a base hit, the Angels taking control of the game late against an injured Octavio Dotel. Saturday, Rick Porcello was outright trolled by the baseball Gods, allowing more infield and seeing-eye hits in one inning than most teams will get in a month.

Today, the Tigers teased us, loading the bases three times, only to leave the bases loaded three times. Given several reprieves, the Angels would walk off in extra innings.

Regardless of the losing result, there was plenty of good amid the bad.

Once again, the Tigers' starting pitching (starting pitching not named Porcello) was excellent. Doug Fister deserved better. Better from his teammates as well, as the defense badly failed Fister.

An already overworked and short-handed bullpen pitched four scoreless innings. I'm not going to hold the Mark Trumbo's home run against Phil Coke. In a normal situation (one where Drew Smyly isn't forced to pitch 5 2/3 innings the day before, Dotel is healthy and the offense doesn't leave the bases loaded countless times), Coke isn't forced to pitch a third inning of relief.

As for the missing offense? I bet it returns this week during the nine-game home stand.

Going into any West coast trip, all I ask of the Tigers is to play .500 ball. They just missed at 4-5. Disappointing? Yes. A death knell? Far from it.

Sure, the three games in Los Angeles were a nightmare. But all nightmares come to an end.

I'm thinking the Tigers' nightmare ends the minute they walk back into the friendly confines of Comerica Park on Tuesday.

This should put things in perspective:

The Tigers had a pair of infield hits in the first inning. The Tigers only needed a dozen or so more to equal the Angels' infield hit total for the series.

The Angels robbed the Tigers of a pair of hits with diving outfield grabs in the first two innings. Josh Hamilton took away possible extra bases from Austin Jackson in the first, which ultimately saved a run. Wonderboy nabbed what would have been a bloop single off the bat of Brayan Pena in the second, ultimately saving another run.

When the Tigers wasted a huge bases-loaded opportunity in the first inning, they were 5-47 with runners in scoring position in the series. Cue sad trombone.

The Tigers have been God-awful this season with the bases loaded. After leaving the bases juiced in both the first and second innings, the numbers say it all:

Then it got worse, the Tigers doing it again in the ninth.

What sometimes is called bad luck is actually a bad play. Howie Kendrick laid down what should have been sacrifice bunt in the second -- Doug Fister and especially Brayan Pena both had a play. But Pena waved off Fister. He then inexplicably let the ball roll instead of picking up the barely-moving ball and easily throwing out Kendrick. Of course, it came to a stop in fair territory for a bunt single. Fister was forced to pitch out of a two-on, one-out jam which shouldn't have happened. Turned out it was just a sign the Tigers' defense was going to take the day off.

Rod Allen called the Tigers the best-fielding team in the league due to having only two errors coming into the game. I have some advice for Rod. Better to remain silent and be thought a fool than to speak out and remove all doubt.

Reason to hate homer official scorers #24,546: 99.999999% of the planet would have charged Cabrera with an error on Pujols third inning liner. The Angels official scorer gave Pujols a gift double and two unearned RBI.

Weird stat of the game is "HBP 3": Fister plunked three Angels in the first four innings.

Prince Fielder goes yard in the fifth, the Tigers fanbase goes, "HUH? OFFENSE? I think those are called points, or goals, maybe baskets? It's been so long, I've forgotten."

As were we all.

Fielder's home run was his third off a left-handed pitcher. He had six in all of 2012.

Rod Allen quote of the day: He called the pitching tracking box "Mr. FoxTrax." I don't want to know what he calls the Fox Box.

Cabrera misfired on another play at third base in the sixth, unable to handle Brendan Harris' one-hopper hit just to his left. The official scorer must be prejudiced against errors, as he gave Harris a hit, another questionable scoring call. Paul Wezner of TigsTown spoke for us all:

LOL how is that a hit

Despite the Tigers having Wilson on the ropes twice, elevating his pitch count early, the Angels starter was still able to go six full innings and 109 pitches, earning a no-decision.

Victor Martinez showed his frustration with this series and overall season when he stuck out on what he believed was a checked swing (replays showed he went around) in the eighth. He disputed the call, then showed up home plate umpire Bruce Dreckman by derisively flipping his bat. To Dreckman's credit, instead of tossing Martinez (as I'm sure a Joe West or Angel Hernandez would have done, with plenty of over the top dramatics), he just ordered him to pick up his bat.

Bunting is dumb. Having your lead-off man who is getting on base at a .379 clip bunt is even dumber.

After the Tigers threatened but did not score in the ninth, Twitter lit up with a Tigers-specific hash tag - #TTBDNS 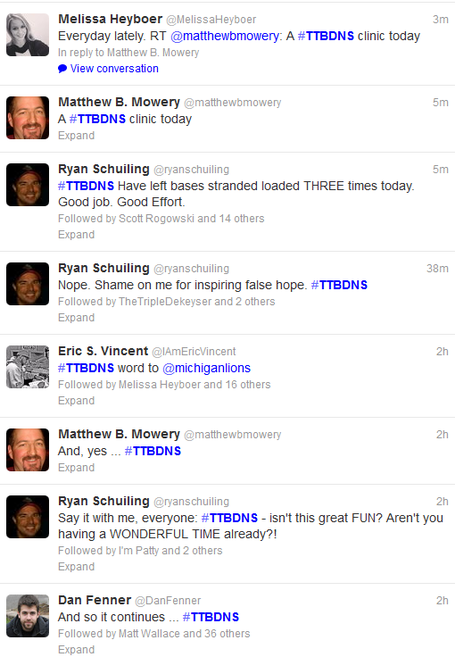 It's the 12th inning, Donnie Baseball at the plate. Allison calls it.

Did you know Mike Trout went from home to first base in 3.8 seconds? Impressive, but we didn't need Rod Allen telling us during every single Wonderboy at bat.

I think Melissa is getting more frustrated than Victor Martinez!

I swear, if I've wasted my Sunday afternoon watching the Tigers get swept in extra innings, I will hurt someone. You've been warned.

Brayan Pena broke one of baseball's unwritten rules in the 13th. Never slide into first base head first. He was roundly ridiculed by baseball hipsters everywhere. Deservedly.

Small favors department: The Tigers won't have to go back to the Twilight Zone known as the West Coast again this season, unless it's in a playoff series. I can live with that.

After the game, it was learned Octavio Dotel was unavailable, still suffering with an inflamed right elbow. Leyland didn't want to pitch Brayan Villarreal for a third-straight day. The only arm left in the pen after Coke was Darin Downs. After that, you're down to Donnie Baseball. So Leyland rolled the dice with Coke.

Prince Fielder: Two hits and a home run accounted for the vast majority of the Tigers' offense.

Tigers defense: Someone needs to inform Rod Allen that good fielding percentage does not equal good defense. The Tigers did their damnedest to prove it this afternoon, butchering several defensive plays but only being charged with two errors.

Jhonny Peralta: When your miscues stand out in what was a dreadfully-played game defensively, that pretty much says it all.

GAME 17 PLAYER OF THE GAME:

Drew Smyly, by acclimation. He was the only Tiger who deserved recognition thanks to his 5 2/3 scoreless innings pitched in a 10-0 blowout loss.