Last week didn't go so well, so this new feature is a bit ill-timed. Anyway, here's a look back at the last week in Tigers baseball.

Welcome to yet another new feature at Bless You Boys: a weekly review of game results, stats, analysis, and pretty much everything that happened with the Tigers in the last seven days. Consider it a one-stop shop for anything you may have missed throughout the week. As always, we appreciate any and all constructive feedback you can provide in the comments about the format and content of this post (which was lifted from True Blue LA, SB Nation's excellent Dodgers blog).

The Tigers started the week having won two of their three games against the Oakland Athletics at the O.co Coliseum, racking up 20 runs during the weekend series. The Tigers had Monday off, but continued where they left off, beating the Seattle Mariners in the first two games of their three-game series.

In the first game, the Tigers were able to outlast starter Aaron Harang and put a few insurance runs on the board thanks to a wild Mariners bullpen. Doug Fister was excellent against his former team, allowing two runs in seven innings.

Game two felt like a prizefight between a couple of title contenders in Max Scherzer and Felix Hernandez, who both put on a performance for the ages by working eight innings with 12 strikeouts, allowing one run apiece. The bullpens continued the show, keeping the proceedings scoreless until the 14th, when the Tigers broke through on a Brayan Pena RBI single. The play of the game, however, was Mariners first baseman Justin Smoak getting thrown out at home plate on a perfect relay from Torii Hunter and Prince Fielder.

More: Overanalysis: the anatomy of a relay throw

The finale of the series was another offensively-starved matchup, with Justin Verlander and Hisashi Iwakuma going toe-to-toe for six innings. The Mariners broke through in the bottom of the seventh, scoring the only two runs of the game off of Verlander before their bullpen shut the door.

The Tiger then headed south to Anaheim to face the struggling Angels, who were 4-10 prior to the weekend series. To say it didn't go well would be a huge understatement, as the Tigers were outscored 22-4 and swept in three games. The Tigers couldn't capitalize with runners on base against Tommy Hanson in the first game, leaving 12 men on base. They avoided a shutout on a Miguel Cabrera RBI single in the ninth inning, but lost 8-1.

The second game was a complete dumpster fire in which Rick Porcello allowed nine runs in the first inning. Nothing more needs to be said here. 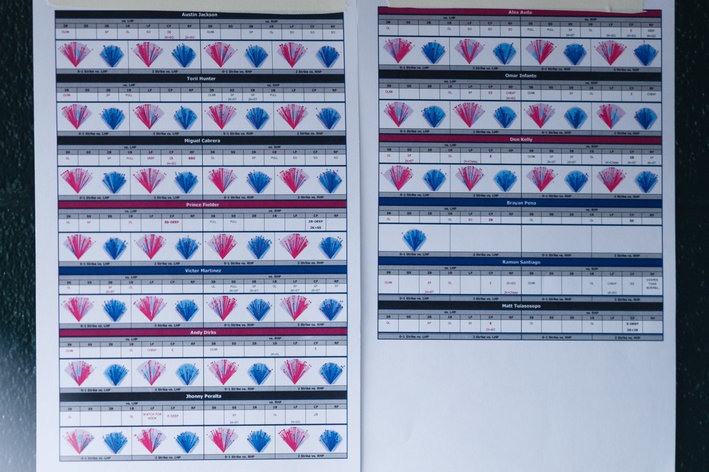 On the third consecutive Bless You Boys Podcast recorded after a Tigers loss, Kurt makes stats up, Allison returns triumphantly and Al dreads the inevitable return of the Big Potato.

The final game of the series was a bit more promising, in that the Tigers actually took an early lead. This was short-lived, though. The Angels scored three runs in the third inning thanks to some shoddy Tigers defense and a wilder-than-usual Doug Fister, who hit three batters in the game. The Tigers tied the score at three with a Prince Fielder home run in the fifth, and the score stayed this way until the 12th inning. Mark Trumbo hit a walkoff home run off of Phil Coke in the 12th to mercifully end the series.

So, in summary of the summary, the Tigers limp home on a four-game losing streak. However, there are some positives in all of this rubble. The Tigers went 4-5 on their only west coast trip of the season, which is far from the end of the world in early April. They are still healthy, aside from some elbow troubles for reliever Octavio Dotel. The top four starters in the rotation have been as good as advertised, Rick Porcello wasn't quite as horrible as his stats indicate, and Drew Smyly has been a tour de force out of the bullpen.

I have a feeling this is going to be the case in most weeks, but it's hard to overlook what Cabrera did in a week where the rest of the team wasn't quite up to par. He drove in almost half of the team's runs scored and led the team in just about every other statistical category. He and Torii Hunter continued to be the main forces driving this offense, as Austin Jackson and Prince Fielder cooled off a bit this week.

Pitcher of the week: Al Alburquerque

As you will see below, Al Al pitched five spectacular innings across three relief appearances this week, allowing just one hit with zero walks and ten strikeouts. He was worth 0.4 fWAR last week alone and had a negative FIP, which is apparently possible. He was huge on Sunday, striking out five Angels in two innings of work while throwing just 20 pitches.

Game of the Week 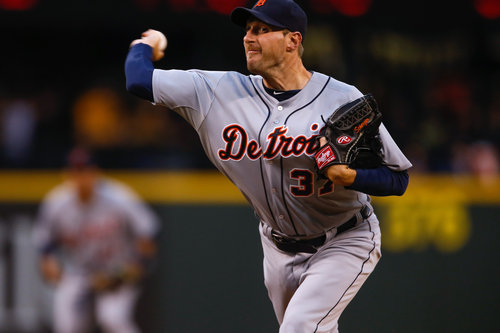 The Tigers outlast the Mariners 2-1 in a 14-inning marathon.

The Tigers have a much-needed off day on Monday, followed by a pair of three game series against the Kansas City Royals and Atlanta Braves, both of which will be played at Comerica Park. The Royals come to town having just won two of three games at Fenway Park against the Boston Red Sox. At 10-7, the Royals have a one-game lead in the AL Central over the Minnesota Twins, and lead the Tigers by 1.5 games. The Braves lost three of four to the Pittsburgh Pirates in Pittsburgh this weekend, but still sport an MLB-best 13-5 record. Their pitching staff has only allowed 44 runs on the season.

The Toledo Mud Hens went 3-4, getting swept at home by Indianapolis before taking three of four against Columbus. Through 18 games, Nick Castellanos is hitting .225/.269/.310 with five extra base hits (no home runs), five RBI, and a stolen base. Casey Crosby is 1-3 with a 4.58 ERA.

The Double-A Erie Seawolves were 4-3 last week. They are third in the Eastern League with a .290 team batting average. Hernan Perez is hitting .333/.352/.470 with nine RBI and seven stolen bases.

The High-A Lakeland Flying Tigers were just 2-5. Like the MLB Tigers, they were also shut out twice this week. They are fourth in the Florida State League with a 3.50 team ERA, but sit last in their division with a 5-12 record. Drew VerHagen, a fourth round pick in the 2012 draft, is 0-2 with a 3.60 ERA in 20 innings.

The West Michigan Whitecaps were just 1-3 this week, but had three games postponed due to inclement weather. They are 6-8 overall.

*wOBA calculations are based off of the 2012 formula. If anyone knows where to find 2013's version, I will happily use that next week.

*FIPs for pitchers that appeared in games on Sunday 4/14 or 4/21 are estimates.