Kansas City has been building for the future for forever, still attempting to bridge the gap between the glory days of the 80s and the present, but despite the number of homegrown prospects, all they have been doing is driving Joe Posnanski and Rany Jazayerli insane.

Fortunately, the Tigers have the annual rite of playing the Royals 18 times a season. Unfortunately, it seems that 12-13 of these games end up being too close for comfort (Note: if there's enough clamor for it, I'll create a kickstarter to buy an HD instant replay camera for the right field line). I know it's probably a little arrogant, but if we can beat teams like the Blue Jays and Yankees by comfortable margins annually, why do the Royals still find ways to make us sweat? Maybe it's just the impending sense of DOOM! that I get every time we play the Royals, or maybe it's just the bad memories of the last series of 2009, but any time that I see "KC" in the chyron, I feel like I need a stiff drink.

Luckily, I have just the answer for this series! In my efforts to tailor each beer to the team we're playing, I've got a good little stretch here. The manager of the Royals? Ned Yost. Ned? The official abbreviation for the Netherlands. Netherlands? Also called Holland. Holland? A city in Michigan, home to one of the better breweries in the country, New Holland Brewing Company.

New Holland treats brain cells like an expendable resource. High gravity beers as flavorful as they are potent are their specialty, and this is no more evident than in their flagship brew, Dragon's Milk. 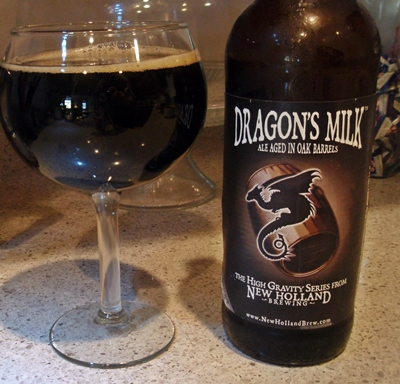 Aside from beer, I love bourbon. If you age anything in a bourbon barrel, I'm likely to drink it. Hell, if you age LEGOs in a bourbon barrel, I may be inclined to try to drink them. I'd definitely build a cup out of them to pour this beer into and drink it. The first thing you notice with this beer is that you can't see through it at all. The "HIGH GRAVITY" on the label is to thank for that. New Holland is known for beers with, for lack of better terms, a lot of "stuff" in them. The Dragon's Milk is a prime example: a great stout with flavors ranging from coffee to vanilla to chocolate to beets (yes, beets). The bourbon aging allows the barrels to impart their unique character onto the beer, adding potency as well as a smooth, sweet finish that lingers in a good way on your tongue. At 10% ABV and 31 IBU, this will definitely knock you on your ass if you're not careful. Before we hit the big warm up into summer, enjoy one of these with a roasted rib-eye (medium rare or you're a heretic) and a chocolate souffle, and savor the fact that you no longer have to start watching the Tigers at 10:00 at night.