Quick thoughts: Forget the bullpen, it's all about Austin Jackson

The bullpen had issues, but the Tigers' vaunted offense disappeared because Austin Jackson stopped hitting.

Share All sharing options for: Quick thoughts: Forget the bullpen, it's all about Austin Jackson

The Detroit Tigers bullpen was not at all good this afternoon, but the offense was the biggest reason behind this loss.

So what has happened to the offense? Austin Jackson stopped hitting.

The Tigers' lead-off man has just two hits in his last 33 at bats, including an 0-for-26 stretch, striking out 12 times with only three walks. Jackson was hitting a season-high .393 with .956 OPS after game one of the Mariners series. He's down to .277, his OPS dropping under .700, after today's loss.

Jackson is in a brutal, brutal slump. So is the Tigers' offense. It's not a coincidence.

But let's' not let the bullpen off the hook. Here are their totals from today - Bruce Rondon, Phil Coke and Darin Downs combined for three innings, six hits, six runs, four walks and a wild pitch.

Doesn't get much worse than that. But it's just one game and Jose Valverde is back, right? RIGHT?

Good thing the best team in baseball, the Atlanta Braves, arrive for a weekend series. Wait...what?

Today's reason for the Tigers fan base to complain: Don Kelly playing left field and batting seventh. That's not so bad. Donnie Baseball could have been batting third.

Something else to keep in mind, all managers do much the same thing. For example, Brandon Inge was batting second for the Pirates today. (HEAD ASPLODES)

There was short rain delay, the game finally starting at 1:38 under cloudy skies and the temperature in the low 40s. Spring in Michigan, everybody!

Austin Jackson ended an 0-for-26 streak with a first-inning double. His last previous hit was in the eighth inning of the 14-inning marathon in Seattle on April 17.

Justin Verlander helped set a team record with his second K of the day in the third.

With Verlander's 2nd strikeout, the #Tigers have 190 as a staff, tying last year's modern era club record for April strikeouts.

Verlander Killer Billy Butler's career average against the Tigers' ace rose to .407 after his third-inning RBI single. He would single again in the fifth, his average up to .418. Good Lord, Justin. Just walk him.

From the game thread, courtesy of send'emhomegene.

The lineup card of Verlander's nightmares

Speed: It's why K.C. will be tough all season. Swinging bunt, SB, set up first run. Cain beats out grounder, later hustles to 3rd, scores.

Speed? Going by Henning's description, luck is what will keep the Royals in the division race. Speed is nice, but small ball won't win jack in the AL.

Victor Martinez doesn't agree with your strike zone. Neither does Mr. Fox Trax. 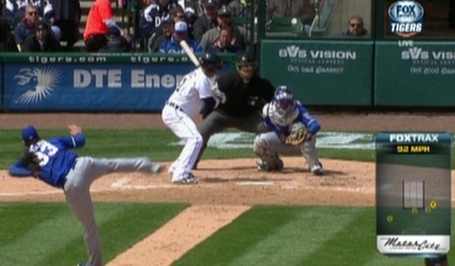 Martinez vigorously and strenuously made his unhappiness known. It was to no avail.

Despite making an awful decision to send Martinez in yesterday's game, Jim Leyland just shrugged Tom Brooken's mistake off, calling it, "Just a good, old-fashioned brain cramp." One mistake should not define a third base coach. Good thing, as Brookens remained aggressive today, paying off with a couple of runs.

Bruce Rondon's debut was full of good and bad. He threw 18 pitches, 12 for strikes, three over 100 miles per hour. But he also allowed a run, three hits, two stolen bases and cost Verlander a shot at a win. The foundation is there, but there's also work to do.

Didn't get to see Rondon, but sounds like it went how I'd expect. Has stuff; needs to learn how to use it. Won't happen in Toledo

The top of the ninth was textbook use of Phil Coke. He faced four batters, three of them left-handed, one right-hander sandwiched in-between. Coke pitched around the righty (issuing an intentional walk) and got all three lefties out. That is exactly how Phil Coke should be used, people.

Too bad the top of the 10th happened.

After the game, Verlander says he was pulled in order to keep the blister on his thumb from becoming something which could affect him down the line. Verlander was confident all is well and will make his next start.

I'll give Eric, aka Phil Coke's Brain, the final word on this train wreck.

I don't know how beat writers do their post game stories for games like this. Like doing an autopsy on a cow that was hit by a bus.

Torii Hunter: Two hits and an RBI was the best offensive performance by far.

Justin Verlander: This tweet says it all about the Tigers' ace and the bullpen, who deserved far better than a no-decision.

Phil Coke: Looked great in the ninth. WHAT HAPPENED?

Bruce Rondon: Rookie mistakes are frustrating, but can be corrected.

GAME 19 PLAYER OF THE GAME:

Who else but Papa Grande? Thanks to what was likely a combination of "Welcome back" and "Thank God you didn't blow the save," Jose Valverde carried the vote with 43%.