Ahh, Interleague play. That time honored tradition dating all the way back to 1997, when men were men, the Brewers were Junior Circuiters, and Bobby Higginson was patrolling left field at Tiger Stadium. It seems like so long ago that Buddy Bell was stalking the dugout and Bob Hamelin was clubbing home runs.

Fast forward 16 years, and so much has changed. PASS is no longer broadcasting Tigers games, there's a new ballpark, and an irascible old guy is prancing around the dugout nowadays. But enough about Octavio Dotel. About the only thing that's similar from that 1997 season is the appearance of the Atlanta Braves on the schedule.

Yes, the Barves were on their way to 101 victories, an NLCS appearance against Jim Leyland's Marlins, and 14 consecutive division titles back in 1997, but they hit a speed bump by losing two of three to the Tigers in early September.

In honor of Interleague play, I will use the home series to show off a few beers from outside the state of Michigan. My home state (Indiana) has started producing some great beer within the last 5-10 years, and while it still has a ways to go to catch Michigan, it certainly has already done quite well regionally. To start off the Hoosier State Lovefest, we're going to profile Upland Brewing Company's Helios Pale Ale. 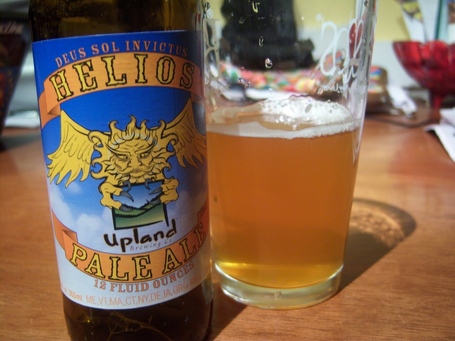 Upland has made its mark with a wide variety of every day beers in Indiana. Their Wheat Ale is probably the most popular, but their Bad Elmers Porter, Dragonfly IPA, Rad Red Amber Ale, Preservation Pilsner, and Nut Hugger Brown Ale are all readily available, great tasting brews as well. I'm a bit partial to the Pale Ale, however, and it's not just for the great flavor.

As an Energy Engineering major, I'm a big fan of companies investing in renewable energy to offset manufacturing costs. The Helios Pale Ale is named in honor of Upland using Solar Tube panels to help heat their tanks for their brewing process. Great beer AND sustainability? Sign me up!

The Helios Pale Ale is named after the Titan of the Sun in Greek Mythology. It is a hop-forward pale with a crisp, clean aftertaste that also has a great smooth malt finish with a touch of grapefruity citrusness (think the citrus tones of Oberon with a slightly hoppier bite). At only 4.9% ABV and 22 IBU, this is a nice beer to sit out on the porch and drink while enjoying some of the warm weather headed our way.

Upland Brewing Company is based in Bloomington, IN.