Anibal Sanchez has a game for the ages

Those of you who had Justin Verlander in the "Tigers starting pitcher most likely to break the team single-game strikeout record" lose the pool.

Share All sharing options for: Anibal Sanchez has a game for the ages

Anibal Sanchez pitched the game of his life, putting his name in the franchise record books.

The Tigers have played 17,520 games in their 113-year history. No pitcher, including such stalwarts as Justin Verlander, Jack Morris, Denny McClain, Mickey Lolich, Tommy Bridges, Dizzy Trout, Hooks Dauss and Hall of Famers Hal Newhouser and Jim Bunning, had more strikeouts in a single game than Sanchez.

This defines dominance. Of Sanchez's 17 strikeouts, 14 were swinging.

Click here to see MLB.com video of all 17 punch-outs.

Stat of the night: Anibal Sanchez was either striking out Braves or allowing an extra base hit. Of the five hits Sanchez gave up, three went for doubles.

Second stat of the night: Sanchez faced the Braves 17 times as a Marlin and never struck out more than seven.

Third stat of the night: Often when a pitcher is racking up strikeouts, a big reason is due to having such good movement on his pitches. But that also tends to make walks more likely. Tonight, Sanchez issued ONE free pass. A textbook case of having complete command of your arsenal.

Fourth stat of the night: Not a single Tigers outfielder recorded a put-out. Talk about taking your defense out of the game!

I tip my cap to Anibal Sanchez.

The Tigers offense has been in mired in a slump since facing King Felix in Seattle. Looking for offensive spark from Triple-A Toledo? Good luck, there isn't any.

CALL SOMEONE UP FROM TRIPLE-A [only guy on the Hens hitting above .250 is a first baseman] WELP

Quintin Berry would have caught it!#Mlived RT @detroit4lyferob: Kelly would have kept that to a single #trollolololol

We all know the Tigers defense suc...wait, what?!

Now, that's just silly. Miggy starting a picture-perfect, 5-4-3 double play with an off-balance throw from behind the 3B bag.

Even Mario Impemba and Rod Allen were stunned by the marvelous around-the-horn double play to end the third.

Speaking of defense, after Austin Jackson singled past a sprawling Dan Uggla and Mario blurted "That looked like a makeable play," the obvious was stated.

Shouldn't the strategy of every at bat be "hit it to Uggla?"

#Tigers sent 19 batters to the plate in the span of two innings. Scored 10 runs. 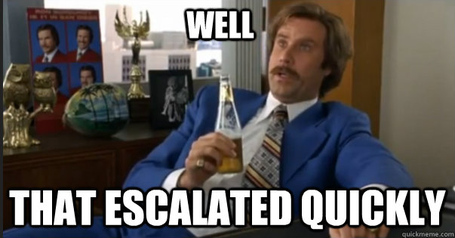 Remember when professional golfer Phil Mickelson tried out with the Mud Hens? He made the team and changed his name to Matt Tuiasosopo.

The Braves would ultimately K 18 times.The last whiff of the night came on a 101-mile-per-hour fastball from the rookie fire-baller Bruce Rondon.

Porcello sitting at locker: "You think the Braves are mad? I hope they're not mad."

He (Sanchez) was pretty good and we weren't. That's all I got for you. You guys have a good one.

A man of few words.

A man never lacking for words, Jim Leyland had a little more to say than Gonzalez on FSD, especially about his starting pitcher.

"It was just a terrific performance against a real aggressive team. They hit the ball out of the ballpark, and they’re real aggressive, and they let it fly. He just made some great pitches, consistently, inning after inning.
"You can’t really get any better than that."

Matt Tuiasosopo: A BIG game for Big Squiggles. Two hits, a three-run homer and five RBIs. Been a long time since we've seen a power bat come off the bench in Detroit.

Anibal Sanchez: A brilliant night on the mound with a career-high 17 strikeouts, shutting out the Braves over eight innings. A certain sports talk radio host here in Detroit said this week the Tigers would have been much better served signing Rafael Soriano instead of Sanchez. That's why you shouldn't listen to sports talk radio (especially between 2-6 PM in Detroit), folks.

Oh, yeah. Remember the top prospect the Tigers gave up to get Sanchez, the centerpiece of the trade with the Marlins?

Victor Martinez: The Tigers' DH was 3-for-4 with two RBIs and two runs scored. The bad luck Martinez was hitting into is finally beginning to even out. (knocks on wood)

Not even going to bother. This win was far too much fun to complain about a damn thing.

GAME 20 PLAYER OF THE GAME:

Justin Verlander was forced to leave the game due to a blister on his pitching thumb, but was more than impressive enough over his seven innings to take PotG honors with 78% of the vote.