Mike Minor and Doug Fister will face off on ESPN Sunday Night Baseball tonight as the Tigers look to sweep the Braves.

Share All sharing options for: Game 23 Preview: Braves at Tigers

Minor was mediocre at best during the first half of 2012, allowing an ERA of 5.97 and an FIP of 5.45 before the All-Star Break. After that, something clicked, because he has been nearly untouchable since. He was 7-4 with a 2.21 ERA in his last 15 starts in 2012, and all four losses were quality starts. Including his lone loss of 2013, which came against the Kansas City Royals, here are Minor's numbers in his last five losses: 33 innings pitched, 10 earned runs, 19 strikeouts, two walks. It then comes as no surprise when I tell you that the Braves have offered Minor two runs of support in those five losses. Not two runs per game, two runs total. Dude's good, and the rest of baseball is just now learning about him.

His arsenal consists of a four-seam fastball, a curveball that he throws to both right and left-handed hitters, a changeup used primarily against righties, and a slider only used against lefties. He throws the fastball almost two-thirds of the time to start an at-bat, and typically saves the off-speed stuff for when he is ahead in the count. His strikeout rate isn't all that impressive, but his command is. He has only walked three batters in 25 innings this season, and two of those walks came when he was pitching in the coldest game ever -- not an exaggeration -- last week. Compared those conditions, anything that Detroit can throw at him in mid-April should feel like a vacation. Well, except Miguel Cabrera.

If the Braves thought that they had fun with Anibal Sanchez's ability to mix pitches and change speeds, they should love Doug Fister. 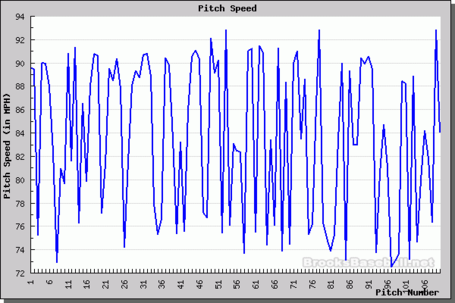 Warning: don't try to move your head along with that graph. You will get a headache.

The above image is Fister's velocity from his last start mapped out on a pitch-by-pitch basis. Fister only allowed five hits against the Los Angeles Angels in his last start, but had trouble with his command. He walked two batters and hit three more, his highest combined total since a start against the Chicago White Sox last August. Unlike that game, however, Fister was efficient enough to pitch seven innings and turn things over to the Tigers' bullpen. He has logged 22 innings in his last three starts, showing the same knack for getting quick outs that he has put on display over the second halves of the past two seasons.

I said yesterday that Porcello needed to mix his pitches and spot his fastball in order to be successful against the Braves. He did both to near-perfection. 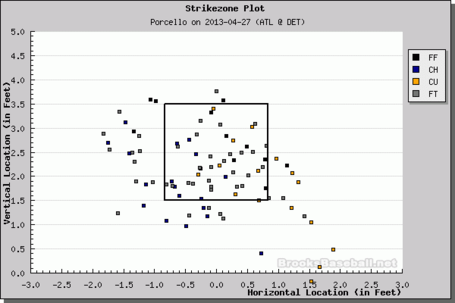 The number of grey dots -- a.k.a. Porcello's two-seamer -- at the bottom of that strike zone makes me giddy.

At Walkoff Woodward, Alex Simon pointed out that Porcello's release points had changed since his previous start, resulting in better downward movement on his fastball and more rotation on his curveball. Fister doesn't need to make any release point changes (as far as we know), but it will be important for him to abuse the bottom of the strike zone with his fastball like Porcello did. If he gets ahead, he will be able to throw any of his pitches and get awkward swings from most of the guys in this Braves' lineup-- just like we have seen over the past two days -- thanks to the fact that he's 6'8" and standing on a mound.

The Braves are at the tail-end of a long road trip, and look just as exhausted (if not more) than the Tigers did at this point last week. They have played 15 of their last 17 games on the road. They are facing a pitcher who has been red-hot to open the year and an offense that is simply better at home for some unknown reason. Mike Minor is a legitimate top-of-the-rotation guy -- maybe more so than Medlen -- but I don't know if the Braves have enough left in them to pull out one last win on this trip, especially if Fister continues to pitch like he has in his last three starts.

A weekend sweep silences the naysayers... for a little while.