A dealing Doug Fister struck out eight, and Miguel Cabrera and Austin Jackson both drilled three-run home runs as the Detroit Tigers completed a three-game sweep of the reeling Atlanta Braves.

Powered by three home runs and seven strong innings from starting pitcher Doug Fister, the Detroit Tigers pulled away from the struggling Atlanta Braves to win going away 8-3. The Tigers scored five times in the sixth and seventh innings to break open what had been a back and forth battle in miserable conditions.

With the victory, the Tigers sweep the three-game series with the NL East-leading Braves.

Fister (4-0) struck out eight, allowing only six hits and three runs to win his fourth game of the season. Braves starter Mike Minor (3-2) pitched into the seventh, allowing six runs and two of the three Tigers home runs in taking the loss.

Miguel Cabrera and Austin Jackson each hit three-run home runs for the Tigers. Omar Infante added a solo shot, homering for the second straight game against his former team.

Despite the rainy weather in Detroit (there was a cold drizzle in SE MI all day), ESPN's Sunday Night Baseball started on time. Good thing, as Fister appeared to be on his game, facing four Braves, striking out three. There was a one-out double off the bat of Tyler Pastornicky, but Justin Upton and Freddie Freeman were flummoxed by Fister, striking out swinging to end the minor threat.

After Minor set the Tigers down in order in the bottom half of the first, the Braves K-fest continued in the second. Fister had his first 1-2-3 inning, striking out Evan Gattis and Dan Uggla in a steady drizzle.

It looked as if a pitcher's duel between Fister and Minor was underway. But Jackson had other ideas.

The Tigers had their first base runner in the third when Brayan Pena drew a one-out walk. Coming off a three-hit game on Saturday, Omar Infante remained hot, lining a single to left, the Tigers' first base hit.

Jackson, finally heating up after slumping badly on the West Coast trip, absolutely crushed a 1-1 Minor breaking ball over the fence in left center. The three-run bomb was Jackson's second home run of the season.

Minor settled down after Jackson went yard, pitching out of the inning without further damage. But the Tigers had scored first for the third consecutive game and held a 3-0 lead.

After Pastornicky struck out, the sixth K for Fister, the Braves scratched together a scoring threat. Fister allowed a single to Upton, then hit Freeman.

Fister then busted Johnson on the fists. Johnson didn't hit it hard, but somehow found green. The jam shot landed in short right for an RBI double.

The BABIPing continued, Gattis' ground ball finding the hole in the right side for an RBI single, pulling the Braves to within a run at 3-2.

Fister got a double-play ball off the bat of Uggla, but you already know the Tigers and double plays just don't mix. Infante's throw pulled Fielder off the bag, Uggla credited with an RBI fielder's choice. So much for the three-run lead, the Braves tying the game at 3-all without hitting a ball hard.

The rain started coming down harder in the bottom of the fourth, making a bad night even more miserable.

The Tigers put together a small threat in the bottom of the inning, Fielder with a lead-off single, Matt Tuiasosopo singling with two down. But Pena bounced out 4-3 to end the inning.

The Braves did the same in the top of the fifth, threatening but did not score.

Andrelton Simmons didn't hit the ball square leading off, but managed to loop a single to shallow left. Simmons having advanced to second on a ground out and Upton at the plate with two down, Fister wasn't going to give him anything to hit.

So he hit Upton instead, Fister's second HBP of the night. Fister would proceed to pitch out of trouble on Freeman's can of corn to right.

In bottom of the sixth, the middle of the order combined to give the Tigers a lead they wouldn't relinquish.

Cabrera's long fly to left center landed on the warning track and bounced over the fence for a ground-rule double. Fielder moved Cabrera to third with a 4-3 ground out. Victor Martinez hit the ball a ton, but it was to Death Valley in right center. Jordan Schafer made a nice running catch at the warning track, Martinez's bid for an extra-base hit became a long sacrifice fly. Regardless, it allowed Cabrera to tag up and score the go-ahead run at 4-3.

Given a lead for the second time, Fister would get the shut-down inning he needed. In his final inning of work, Fister tossed a 1-2-3 seventh inning, acquiring his eighth strikeout in the process. He would then receive the "Handshake of Doom" from Jim Leyland after 105 pitches. Fister's wet night was over.

With two down in the bottom of the seventh, Infante added an insurance run off Minor, going yard for the second straight game against his former team. Infante's second home run of the season was a solo shot over the bullpens in left, giving the Tigers a 5-3 lead.

Hunter greeted Gearrin with a single to right, giving Cabrera an at-bat with a runner in scoring position. Pitching carefully, Gearrin would fall behind Cabrera 3-0.

In the booth, John Kruk spoke up all Nostradamus-like.

"It's 3-0, Gearrin better not lay one in there, or else this will end up a three-run homer."

Just as Kruk knows ribs, he knew what was up here.

Gearrin did lay one in there, a belt-high fastball on the outside part of the plate. Cabrera did drill a three-run homer, one of his patented opposite-field line drives over the wall in right.

The Tigers had rallied for four two-out insurance runs, blowing the game open at 8-3.

Al Alburquerque took over in the top of the eighth, and had an Alburquerque-esque inning of one walk, two wild pitches and three strikeouts.

Al-Al walked the lead-off man, Upton. He would uncork a pair of wild pitches to send Upton to third, but would also strike out the side, all looking at his wicked slider.

Jose Valverde warming up, Leyland allowed Alburquerque to start the ninth. The move didn't pay any dividends, Alburquerque walking Uggla and hitting Reed Johnson with a pitch (the third Brave to be plunked).

Leyland made the call for Papa Grande to face Simmons, who laced a line drive to left on the first pitch. The ball looked like trouble when it left the bat, but Don Kelly, who had taken over in left in the previous inning, got on his horse to make a nice running catch for the first out.

The Big Potato broke Schafer's bat, hitting a one-hopper to Peralta for the force at second. Two down.

Valverde finished off the Braves in style, easily handling Pastornicky's come-backer for the final out.

Winners of three straight and four of five, the Tigers are in second place in the AL Central with a 13-10 record on the season, one game back of the Royals.

The slumping Braves have lost four straight and are 3-8 since hitting their high water mark of 12-1 to start the season. The Braves remain in first place in the NL East at 15-9, their lead having shrunk to 2 1/2 games over the Nationals.

The Tigers start a three-game series with third-place Twins on Monday. First pitch is at 7:08 PM.

John Kruk is looking off-screen for another plate of ribs. No wonder Dan Shulman looks so uncomfortable.

John Kruk out-of-context quote of the night: "Everything's coming in your eyes."

As a fan who watches every Tigers game, the one big problem with a national telecast is that the narrative is aimed toward a more casual audience not familiar with either team. Thus we learn things such as "Miguel Cabrera has great power to the opposite field." No kidding, we get to see it every game. But someone watching in Peoria might not know of Cabrera's prodigious opposite-field power.

How good did Doug Fister look in the opening three innings? Really, really good. Fister needed only five minutes and eight pitches to get through the top of the third.

Is it bad that I don't really want the Tigers to bat? I'd rather just watch Fister pitch. #Filthy

Prince Fielder added a little class to the proceedings with his walk up music, but it freaked TRIPPING OLNEY out.

PRINCE FIELDER JUST WALKED UP TO MOZART? WHAT KIND OF DRUGS DID I HAVE THIS MORNING GOOD LORD SOMEONE HELP ME

Samara has issues with the ESPN crew. Mainly, that it doesn't have Rod Allen.

i'm most surly about national broadcasts when i know i'm missing out on a rod allen call of an austin jackson home run.

Why wasn't Omar Infante dinged with an error on the botched fourth-inning double play? Due to a rules technicality, you can't assume a double play will happen.

Rogo gets in a dig at Infante's throwing arm.

Love that VW commercial with Infante playing catch with his kid. 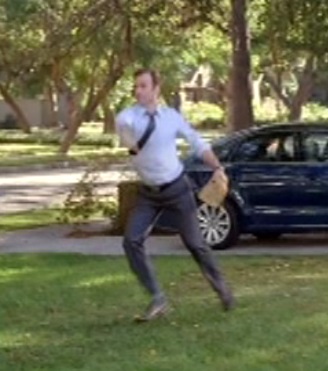 As if on cue during Matt Tuiasosopo's second at-bat, the ESPN crew told the "Tuiasosopo emailed the team for a job" story. Anytime Big Squiggles gets into a nationally-televised game, I guarantee the anecdote will be told.

You'll also get this narrative on EVERY national broadcast from Detroit:

When Upton was plunked in the fifth, it was the eighth HBP of the season for Fister. To that point, Fister had issued only six walks this season.

Torii Hunter's still figuring things out, such as how to congratulate Miguel Cabrera. Fist bump or high five? 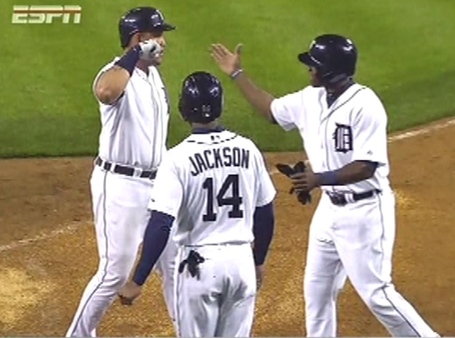 The Braves road trip has been brutal.

The #Braves exited Atlanta with a 12-2 record on April 17. They will return in a few hours with three wins in their past 10 games.

The Braves struck out 39 times in the three-game series. I thought it was windy in SE MI this weekend...

Jose Valverde has faced nine batters since his return to the big leagues. He's retired all nine. I could get used to this!

Papa Grande looked as if he thought the ball off of Simmons' bat was going to end his streak. So did the rest of us. 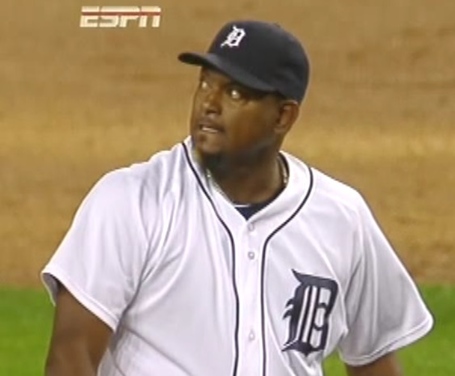 Not tonight, thanks to Donnie Baseball. Papa Grande is throwing the ball well, but he's also gotten a little lucky. Such is the life of a big-league closer.

Doug Fister: Had wicked stuff. The Braves managed to score three times, but they did not hit the ball at all hard off Fister. Seven innings, three runs, eight strikeouts, quality start.

Austin Jackson: Has battled through his slump, now swinging the bat far better than a week ago. Reached base twice, scored two runs and hit a big three-run homer.

MLB Scheduling: This was the Braves one and only trip to Detroit, the last game between the two teams this season and televised on ESPN. All of which forced the game to be played in outright horrible weather.

GAME 22 PLAYER OF THE GAME:

Omar Infante had three hits, three RBIs and a home run, and was rewarded as PotG with 68% of the BYB vote.