The Tigers sure made people feel a lot better about their start to the season with a 4-1 record this week against the Kansas City Royals and Atlanta Braves.

What a difference one week can make. Last week, the Tigers were coming off a three-game sweep at the hands of the Los Angeles Angels and were in the middle of a four-game losing streak. This week, they were the ones breaking out the brooms, sending the Braves to their own personal four-game skid.

The Tigers were rained out on Tuesday, but that didn't mean there wasn't anything to talk about. The club called up Bruce Rondon from Triple-A Toledo early that afternoon. Octavio Dotel was placed on the disabled list to make room for Rondon. Later that day, Jose Valverde was spotted on a flight to Detroit. The club denied that this meant anything, which meant one thing: Papa Grande was a Tiger again. Brayan Villarreal was sent down to Toledo in hopes of finding mechanics and confidence.

On Wednesday, the Tigers started a brief series against the Kansas City Royals. Max Scherzer didn't have his best stuff, but the offense picked him up by scoring seven runs on Royals starter Wade Davis. The bullpen did their job, getting the final 12 outs. Jose Valverde made his 2013 debut and pitched a 1-2-3 ninth inning for the save.

The aces were on display on Thursday afternoon, with Justin Verlander and James Shields going head-to-head for the third time in their careers. Verlander left the game after seven innings with a blister on his right thumb, but also with the lead. Bruce Rondon allowed a run in the eighth inning, earning a blown save in his major league debut. The teams entered the tenth inning in a 3-3 tie, but Phil Coke and Darin Downs combined to allow five runs and the Tigers lost 8-3. 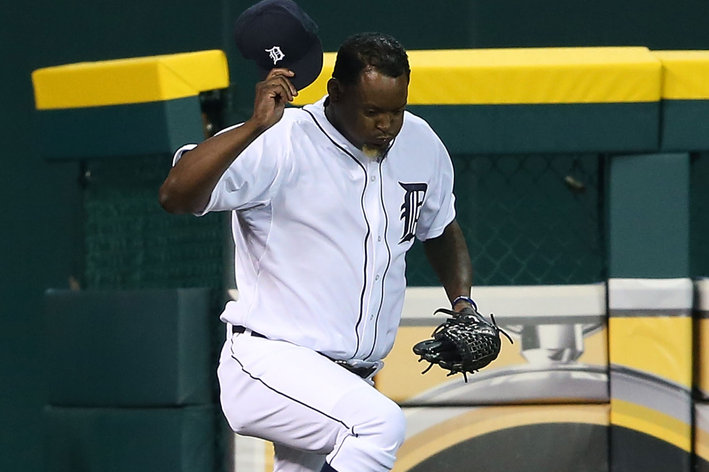 On the fourth consecutive Bless You Boys Podcast recorded after a Tigers loss, Allison wants money, Ian compares Jose Valverde to a blankie and Al issues a warning.

The Atlanta Braves came into town on Friday evening sporting a major league-best 15-6 record thanks to some excellent pitching. Neither of these things would last the night. The Tigers' offense exploded for 10 runs, giving Anibal Sanchez a mountain of runs to work with. He didn't need them, tossing eight shutout innings. Oh, and he broke the club's strikeout record by fanning 17 Braves batters.

On Saturday, Rick Porcello took the mound hoping to bounce back from his nightmare outing the week prior. He did so with a vengeance, pitching into the seventh inning while allowing three runs on -- you guessed it -- a bunch of seeing-eye hits and bloop singles, though he did walk in one run. The offense picked him up too, scoring seven runs, and the Tigers won 7-4. Jose Valverde pitched another perfect ninth for his second save of the season.

The Tigers capped off a sweep of the Braves on a rain-soaked Sunday night. Miguel Cabrera, Austin Jackson, and Omar Infante homered in front of a national TV audience while Doug Fister won his fourth game of the season.

Batter of the week: Omar Infante

Infante's big weekend punctuated an excellent week at the plate for the Tigers' second baseman. He hit a whopping .526/.550/1.053 in 20 plate appearances, hit two homers, drove in five runs, and scored seven more. He also stole* a base. Between him and Jhonny Peralta coming alive in recent weeks, it looks like the Tigers may not need to look too far to find serviceable middle infielders next season.

*He was out. We're not giving it back.

How can it be anyone else? Sanchez's masterful performance on Friday night is already in the Tigers' record books and it showed the rest of the league that this rotation is a force to be reckoned with. His season ERA is down to 1.34, his FIP is 1.36, and he has already accumulated 1.7 fWAR this season, second in all of baseball to St. Louis Cardinals pitcher Adam Wainwright and tied with Yu Darvish of the Texas Rangers. 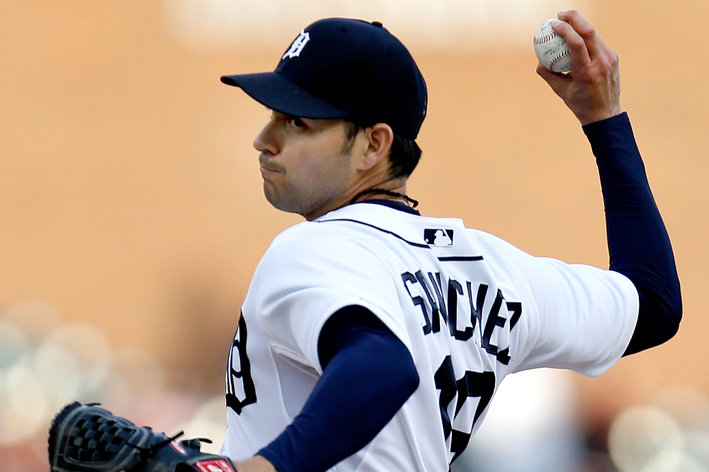 The Tigers wrap up their nine game home swing with a three game series against the Minnesota Twins, who have gotten off to a surprising start. They just finished a six game home stand against the Miami Marlins and Texas Rangers. Their bullpen has led the way; five of the Twins' relievers have an ERA under 2.60.

After that, the Tigers head to Houston for a four game series against the newest team in the American League, the Astros. They have been playing as well as expected so far and are already 10 games under .500. They can be stingy at home, especially when Bud Norris and Lucas Harrell are pitching. The Tigers will see both right-handers this weekend.

The Toledo Mud Hens spent a rough week down in North Carolina, winning just one of their seven games. Pitching and defense were issues for Toledo, as they allowed 25 earned runs and nine unearned runs in seven games.

Double-A Erie went on a tear, winning four of their five games behind a potent offense and dominant pitching. They scored 21 runs without hitting a single home run this week.

High-A Lakeland went 4-2 on the week. The offense piled up the walks, earning 37 free passes in six games. Avisail Garcia had three hits in 15 at-bats on his rehab assignment.

The West Michigan Whitecaps finally had a week without a postponed game, and they went 4-3. They stole eight bases as a team during the week. Danry Vasquez and Austin Schotts swiped three bags apiece.

Our head scout/minor league guy* Brian Sakowski would probably advocate for Devon Travis to get this "award," but Castellanos had a monster week in Toledo. He hit .321/.406/.750 with three home runs -- one of which was reportedly an absolute moonshot -- and five RBIs. He had a .480 wOBA compared to .433 for the aforementioned Travis, who drove in seven runs for West Michigan. Kyle Lobstein also deserves a mention for out-dueling Pittsburgh Pirates stud prospect Jameson Taillon for Double-A Erie on Saturday.

*We need to come up with a better title for him.

*wOBA calculations are based off of the 2012 formula. If anyone knows where to find 2013's version, I will happily use that next week.