The Twins come to town at 11-10 and third in the AL Central. Max Scherzer and Mike Pelfrey will be the starting pitchers this evening.

Share All sharing options for: Game 24 Preview: Twins at Tigers

Pelfrey has not been very good in his three starts this year that didn't come against the Tigers. He has allowed 15 earned runs in his last 11 2/3 innings, but still has yet to allow a home run in 2013. He was never much of a strikeout artist, but his strikeout rate has been almost nonexistent in 2013. He has six strikeouts in 17 innings and hasn't had more than two punchouts in any start this year. He has a 3.17 FIP, which seems odd given the low strikeout numbers. I'm not sold that he's due for a ton of regression, given his 2.00 WHIP. He has looked very hitable through his first four outings despite a 16.7% line drive rate.

In the four starts he has made this season -- he is coming off of Tommy John surgery, remember -- Pelfrey's average fastball velocity has dropped by over two miles per hour. Instead of throwing 94 miles per hour with the ability to reach back for 96, he has turned into your prototypical Twins pitcher who sits in the low 90s and lives on the corners (his stats indicate that he's still working on the "living on the corners" part). The velocity on his splitter has dropped a bit as well, but he is not using his off-speed pitches nearly as much as he did pre-Tommy John. His two- and four-seam fastballs account for 70% of the pitches that he has thrown in 2013. He has thrown a surprising amount of first pitch curveballs to left-handed batters, who are hitting .400/.438/.567 off him this year.

Scherzer got into trouble in his last start when he allowed four runs in the third inning to an aggressive Royals lineup. On the four RBI hits he allowed, he threw a total of five pitches. Normally, I'd equate this to being too aggressive with the fastball, but three of those five pitches were changeups and only one was in the heart of the plate. Here are the locations of the pitches Scherzer threw in that inning. 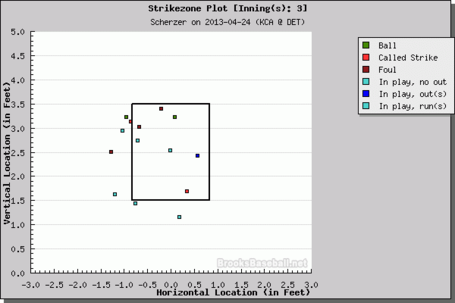 Of all the light blue dots that indicate hits, only two are inside the strike zone. The one on the upper left outside of the strike zone is Billy Butler's handiwork, while the one at the bottom that looks like someone golfed off their shoelaces was Alex Gordon's RBI double. The Twins tend to be patient and work counts, but don't be surprised if they show similar aggressiveness at times, especially with runners on base.

Mike Pelfrey is Brad Penny reincarnated with men on base

Dude works slow. Prepare yourselves for a long game.

Yeah, they have only played 21 games, but the Twins have gotten back to what made them so successful during the past decade: great pitching from guys you wouldn't expect, especially out of the bullpen. Their pitching staff ranks sixth in the major leagues in fWAR and fourth in FIP. Their bullpen has been even better, ranking third in fWAR, fourth in FIP, and fourth in ERA. Their defense ranks 27th in the majors in defensive efficiency -- you get one guess who is last -- so it is probably still too early to declare this surprising start as anything more than a surprising start.

The Twins have struggled to score runs, ranking at or near the bottom of the American League in just about every offensive category. They have picked up the production a little bit since second baseman Brian Dozier replaced center fielder Aaron Hicks at the top of the lineup, largely thanks to Dozier hitting .364/.389/.455 in those eight games. Joe Mauer continues to be Joe Mauer, and Josh Willingham continues to be the only home run threat in their lineup. Infielder Eduardo Escobar, who had the walk-off RBI double against the Tigers earlier this month, is hitting .438/.465/.625 in 33 plate appearances.

The Twins have defied expectations so far this season, playing above .500 against some pretty good competition. They split a four-game series with the Texas Rangers thanks to some great pitching from Pedro Hernandez and Kevin Correia, the two starters that the Tigers miss in this series. After this ten game road trip, which includes stops in Cleveland and Boston after this series, we should see what the Twins are made of. They may be in the wrong place at the wrong time, though, as it looks like the Tigers have found their stride.

Scherzer labors through six inefficient innings, but the bullpen closes the door for a Tigers win.