Woohoo, we made it through the gross weather of April, and (knock on wood) we're going to start playing baseball in, you know, baseball weather! May brings about the crescendo into warm temperatures that signal the true start of summer (unless you're in Texas, Arizona, or Florida, when it's just damn hot all the time).

The arrival of the Twins for the first of three trips to Comerica this season is a much different situation that then opening series of the season in Minnesota when the Tigers were wearing long underwear, balaclavas, hand warmers, and mittens to deal with stupid cold temperatures in early April. Since Major League Baseball doesn't want to give warm weather teams a competitive advantage by scheduling more games in the south for April and late September, cold weather baseball is here to stay, so we're just going to have to deal with seeing Prince Fielder in Arctic excursion gear.

Thankfully, the spring warmup has brought temps in the high 60s and low 70s, hopefully signaling the awakening of the Tigers' bats and Justin Verlander's velocity. The warmup also signals the switch from the dark, substantial beers to the lighter, crisp, easy drinking beers perfect for a sunny day after mowing the lawn. The lack of color does not have to indicate the lack of flavor as best seen by our next beer, Frankenmuth Brewing Company's Frankenmuth Pilsner. 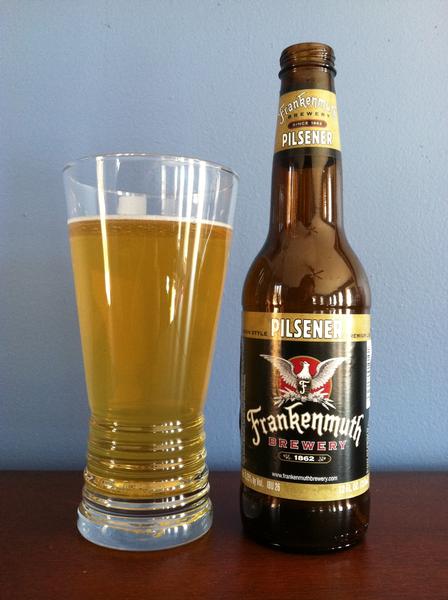 It was a family holiday tradition of ours to go to Frankenmuth and have the massive chicken dinner at either Bavarian Inn or Zehnders (two restaurants, Twins, get it?), and there was usually blood spilled, dirty tactics employed, and even...okay, we usually played a game of euchre to decide which one we went to. Personally, I'm a Bavarian Inn man myself, but both dinners were fantastic.

And if you're going to enjoy the chicken dinner, this is an excellent beer to pair with it. It's a light, crisp, smooth pilsner that doesn't sacrifice any flavor. It is made with the original Reinheitsgebot (German Beer Purity Laws) by using only malted barley, hops, water, and yeast (beer wasn't originally made with yeast, but that's another story for another day). The flavor is best described as clean, yet robust, with a hint of clove and lemon zest. This is a much more flavorful and enjoyable beer that the Stellas and Macro Lights of the world that goes great with brats and seafood, and at only 5.2% ABV and 26 IBUs, you can drink a few each game while you watch the bats warm up.