Max Scherzer changed his approach in the middle innings of tonight's game to keep the Minnesota Twins off balance and pick up his third win of the season.

Through the first four innings of tonight's 4-3 win over the Minnesota Twins, Max Scherzer had thrown 69 pitches and allowed three runs on four hits. He led off the top of the fifth inning by allowing a bunt single to Twins shortstop Pedro Florimon, and looked like he would struggle to get through the sixth inning.

Instead, as you know, he buckled down and pitched into the eighth inning, racking up six strikeouts through his last 3 1/3 innings of work. How did he do it? Let's take a look.

One would assume that Scherzer started throwing more strikes in the later innings and blowing his mid-90s fastball past the tired Twins hitters. Hey, if it works for Justin Verlander, it must be OK, right? Not in this case. 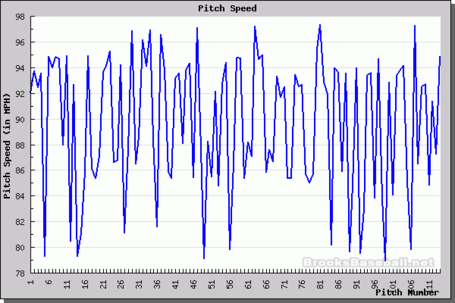 As you see here, Scherzer's velocity actually dipped in the later innings. He threw two of his fastest pitches of the game later on, but on the whole his fastball velocity dropped off slightly as he moved past the 70 pitch mark. 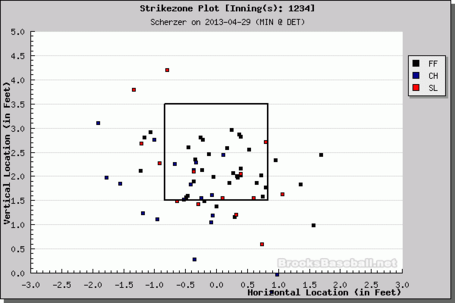 And here are the last four innings. 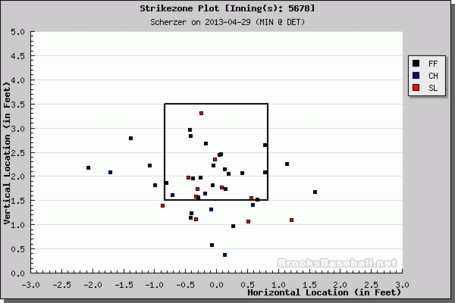 Scherzer started hitting the bottom of the strike zone more often, making things much more difficult on the Twins' hitters. If you take a look at the at-bat results, you can see that he got into trouble most often in those first four innings when leaving the ball up in the strike zone. 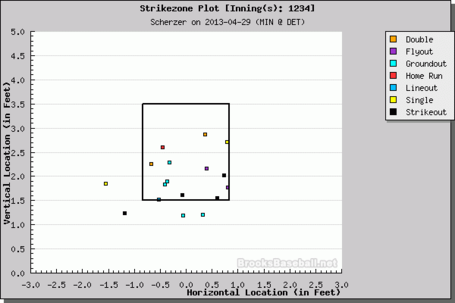 This wasn't the only adjustment that Scherzer made, though. Florimon's bunt single, the last Twins hit of the game, was on a fastball.

After that, Scherzer started all three of the Twins hitters he faced in that same inning with off-speed pitches. Joe Mauer, who almost never swings at the first pitch, was retired on a first-pitch changeup.

In fact, of the ten hitters Scherzer faced after Florimon's single, only two saw first pitch fastballs. Scherzer relied on his slider and changeup more often early in counts, then used a healthy mix of all three of his pitches to finish off at-bats with strikeouts.

By changing his approach, Twins hitters were thrown off. If they see a first-pitch slider or changeup then a fastball to go down 0-2, what does Scherzer throw next? Does he go to the breaking pitch that he threw earlier? Does he try another fastball?

Oswaldo Arcia's at-bat in the seventh inning is a perfect example of this. Scherzer starts him out with a changeup, which Arcia gets out in front of and fouls off.

Next, Scherzer blows a 94 mile per hour fastball by him. Arcia, having seen the changeup on the first pitch, has no chance at catching up with the heater.

Now Arcia has no idea what is coming, and it shows on the 0-2 pitch.

Scherzer's changeup is in the dirt, but Arcia chases anyway.

While a mid-90s fastball and biting slider are a lethal combo, the ability to adjust his approach midway through the game and throw any pitch in any count for a strike will elevate Scherzer from being a very good pitcher to a true ace. He will still have his rough patches, especially when he relies on velocity too much and leaves his fastball up in the strike zone, but those instances are becoming fewer and fewer with each start he makes.