Justin Verlander, Miguel Cabrera and Prince Fielder made their presence known tonight. The Twins never had a chance.

If there is such a thing as a ho-hum victory, the Tigers 6-1 win over the Twins was it.

The game never felt as if it were in question, not with Justin Verlander, Miguel Cabrera and Prince Fielder doing what they do best. The Tigers' three big guns are paid to perform. They did just that, all making important plays to beat the Twins.

Verlander battled his way through seven innings, allowing only one run, striking out eight. He wasn't sharp, allowing base runners in five of seven innings. But Verlander did what an ace is supposed to do, put his team in position to win.

Cabrera, as he has done all season long, gave the Tigers an early spark. This time it was an opposite-field home run in the bottom of the first to put the Tigers up 2-0.

Fielder had the back-breaker last night, a three-run bomb which won the game. He did it again tonight in the fifth. Fielder drilled a line drive over the right-field wall, a two-run dagger which gave the Tigers their final margin of victory, all but ending the Twins' chances for a win.

The Tigers' three stars more than made their presence known. The Twins never had a chance.

From the "Baseball is a funny game" department: The Phillies activated Delmon Young off the DL this afternoon. In his first at-bat as a Phil, Delmon homered against the Indians. I have a feeling it'll be all downhill from here for Young in the City of Brotherly Love.

From the "Baseball is a funny game" department, part deux: Ryan Raburn has four home runs in his last six at-bats for the Indians over the the past two games. He hit back-to-back jacks in a blowout win over the Phillies.

Melissa has a question:

Who's the bigger troll? Ryan Raburn or Delmon Young?

Cabrera's first-inning home run was the 187th of his Tigers career, tying Rogo's favorite player, Bobby Higginson, for twelfth on the Tigers' career home run list. It took Higgy 11 seasons to reach 187, while Cabrera reached the mark only 25 games into his sixth season.

In the battle to win Cabrera's home run ball, either Quintin Berry or a fan wearing a rare Berry jersey was in the middle of it. 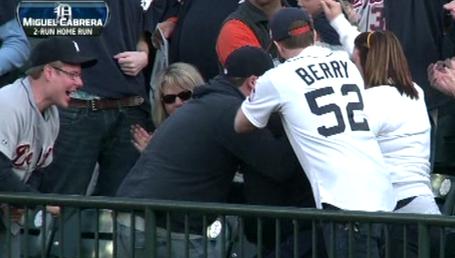 Odd stat of the night:

Being I'm watching the FSD broadcast almost every night, covering the game for BYB, I rarely get to hear what Dan Dickerson and Jim Price are up to on the radio side of things.

Jim Price just said Worley would like Joe Mauer to cuddle with him on the mound, more or less

As if we needed to be reminded Miguel Cabrera is good at baseball, FSD posted this amazing stat: 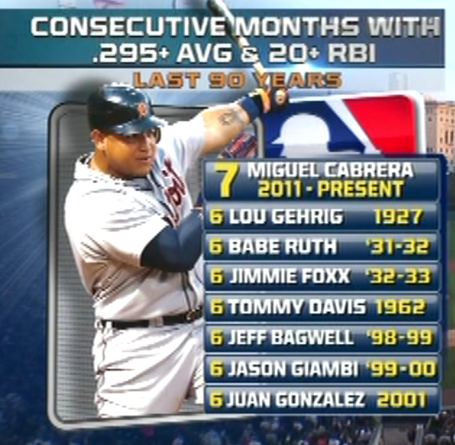 According to Phil Coke's Brain's Tigers speed rankings, Victor Martinez is the slowest player on the roster, Tom Brookens is the fastest coach. Odds are Brooksie could beat Victor in a foot race. The Tigers' DH was thrown out at the plate again, this time in the fifth inning. Brookens sent Martinez from second on Andy Dirks' single to right, but was thrown out by the Twins' Chris Parmelee on a close play.

Predictably, the Internet blew up.

New rule: don't send Victor Martinez around to score if the baseball is in the field of play.

Early birthday present for Tom Brookens, for use when Victor is on the basepaths for the #Tigers twitter.com/matthewbmowery…

When I see Victor running, I expect a squeaking sound and nuts and bolts falling off.

Verlander was pulled after seven innings and one run, a quality start. Something which has become commonplace as of late.

With JV's outing tonight, Tigers starting pitchers have posted a quality start in 15 of the last 17 games. #tigers

For all the worry this season about Verlander's velocity being down, those fears were put the rest in this game, his fastball easily reaching the mid-90s. The highest was a fastball to Josh Willingham that hit 97 MPH on the Comerica Park radar in the second inning.

Verlander is fine. The numbers say as much.

Prince Fielder: Went yard for the second time in the series with a two-run shot, added a single and two RBIs. It's safe to declare Fielder's slump kaput.

Miguel Cabrera: Only one hit for Cabrera tonight, but it was a two-run big fly which gave the Tigers an early lead.

Victor Martinez: Three hits in four at-bats, including a double.

Drew Smyly: One inning of shutout relief. Smyly would look great at the bottom of the rotation, but it would be a blow to the bullpen.

Joaquin Benoit: Pitched out of a ninth-inning jam not of his own doing, got strikeout number 10 which tied the AL record.

Alex Avila: Has had an awful start to the season, let's hope the home run jump starts his hibernating bat.

Al Alburquerque: Had no command tonight, forced Jim Leyland to use Benoit with a five-run lead.

GAME 23 PLAYER OF THE GAME:

Thanks to his game winning three-run homer, Prince Fielder earned top honors from the BYB community with 61% of the vote.