The Tigers can't get out of wintery Minnesota quickly enough, losing the rubber game of their season opening three game series.

The Minnesota Twins broke open a close game with five runs in the 8th inning, taking down the Detroit Tigers for a second straight day, 8-2.

Mike Pelfrey pitched 5 1/3 innings to take the victory. Twins relievers combined to shut out the Tigers over the final 3 2/3 innings. Rick Porcello was the starter and loser for the Tigers, allowing a pair of homers and three runs. Brayan Villarreal was charged with all five 8th inning runs.

Josh Willingham and Trevor Plouffe homered for the Twins. Aaron Hicks and Pedro Florimon had two RBI apiece. Victor Martinez and Austin Jackson chipped in two hits each for the Tigers.

Jim Leyland was calm and collected about his team's blown chances after the game, saying, "We get those chances all year long, we'll be good."

So was Torii Hunter, reminding us. "You can't judge it on three."

The Tigers top of the order dynamic duo, Jackson and Torii Hunter, just plain manufactured a run in the top of the 1st. Jackson singled, stole 2nd, took 3rd when Joe Mauer's throw bounced into short left field for an error, scoring on a ground ball to short off the bat of Hunter.

The Tigers increased their lead in the 3rd inning, Hunter once again instigating a two out rally. Hunter bounced a two-hopper to Florimon at short. but his throw was in the dirt. Justin Morneau couldn't dig out the throw, Hunter aggressively taking 2nd as the ball caromed a short distance away. Miguel Cabrera made the Twins pay for their fielding faux-pas with an RBI single.

The Tigers were up 2-0, but the Twins quickly countered, tying the game with two outs in the 3rd. Mauer singled, then rode homer on Willingham's home run over the 377 mark in left center.

Plouffe muscled up in the 4th, smoking a Porcello fastball off the facing of the upper deck in left. The no-doubt solo home run gave the Twins a 3-2 lead.

For the first time in this series, the Tigers starting pitcher almost outlasted his opponent. ALMOST.

Martinez singled with one out in the 6th, Ron Gradenhire pulled Pelfrey out of the game after 5 1/3 innings and 96 pitches. Brian Duensing got out of the inning unscathed.

Porcello entered the 6th inning at 88 pitches and Octavio Dotel ready to make his first appearance of the season. Hoping to finally get a starter past the 6th inning, it didn't happen. Porcello couldn't get out of the inning, sandwiching a fly out between a Morneau walk and Ryan Doumit single. That was enough for Leyland, calling for the warmed up Dotel.The ancient one did his job, ending the inning without incident.

The 7th inning was killer, but not in "That concert was KILLLER!" way. More like a "Leaving the bases loaded is a hope killer" way.

With Josh Roenicke on the mound in relief, Infante walked. Jackson doubled him to 3rd base with no one out. Hunter stuck out on three pitches. DOOM.

Cabrera was intentionally walked to load the bases.

This is where the Tigers should have broken the game open and taken the lead. But the offense remained in Lakeland when the team went north.

Martinez was a force in two out, bases loaded situations in 2011 (5-10, 11 RBI). His first shot at a bases full situation didn't go as well. Tigers' ex-pat Casey Fien got Martinez to pop up, allowing the Twins to cling to their 3-2 lead.

Villarreal took the mound to start the inning. Morneau walked, went to 3rd on Doumit's double down the left field line. After one was down, Chris Parmelee rocketed a one-hopper toward Fielder. It handcuffed him, bouncing to Infante. Parmelee narrowly beat the throw to Villarreal covering for an RBI single and a 4-2 Twins lead.

Villarreal ignored Parmelee, allowing him to steal 2nd without a throw, then walked Jamey Carrol to load the bases.

Florimon blooped a two RBI double just inside the foul line in left, giving the Twins a 6-2 lead.

Aaron Hicks drove in the final nails, following with the first hit of his MLB career, a hard single to right scoring two runs. Twins up 8-2, Tigers fans down in the dumps.

Al Alburquerque was forced to come out of the pen to dowse water what was left of the Tigers smoldering embers of an inning.

Hopefully, we will have forgotten all about the Twins by this time Friday afternoon.

It's far too early for anything but saying, "That's baseball." Regardless, this FSD graphic has been the 2013 season in a nutshell. 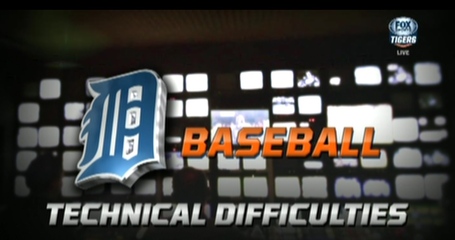 Fangraphs with the win probability graph. Yes, I thought the Tigers were going to win after Jackson doubled too.

Porcello didn't allow a single base on balls this spring. The streak ends in his first start, walking the third batter he faced, Willingham.

After starting the season 0-7, Martinez singled in the 2nd inning. It was his first regular season base hit since September 28, 2011. Until today, Martinez's last hit for the Tigers was a single in the 8th inning of game six of the 2011 ALCS. His bat has been missed.

Porcello allowed three home runs in 24 spring training innings. He allowed two in his first three regular season innings. Which shows why spring training numbers should always be taken with a semi-large grain of salt.

Before anyone gets all up in arms over Hunter bunting with one out and runners on 1st and 2nd in the 5th inning, the Id of the Tigers fan base has something to say.

It almost worked, but Plouffe made a play, nipping Hunter by half a step. On the plus side, Hunter saw Plouffe was playing back and took a shot. On the minus side, Rod Allen thought it was good strategy.

The first Matt Tuiasosopo sighting of the 2013 season came with one out in the 6th, pinch hitting for Donnie Baseball. Big Squiggles flew out to right.

Porcello had the longest start of the season by 1/3 of an inning. Baby steps. Would have preferred a better performance? Sure. But I'll take 5 1/3 innings and three runs from the 5th starter every time. We used to dream of Brad Penny putting up similar numbers.

After the 7th inning bases loaded debacle, the Tigers were 1-for-10 with runners in scoring position, stranding nine base runners.

Bullpen surprise of the early season is Darin Downs, who has been extremely effective. He was excellent again, pitching a 1-2-3 7th, striking out two.

Prince Fielder - 0-4, 4 LOB: Striking out with the bases loaded and one out gets you on the list.

GAME TWO PLAYER OF THE GAME: