Winning and losing baseball games happens 162 times during a team's season. Our pals Good and Horrible will take you through a cavalcade of emotions and responses so you know you are not alone in your overreactions!

Greetings fellow spaceship Detroit Tigers travelers! The 2013 season is upon us, taking baby steps towards being the grizzled veteran managers will love by September. This season, like all seasons, must go through ups and downs, peaks and valleys, waffles and chicken – the usual entrees and growing pains we all experience in our lives.

I've once again asked our swell buddies Good and Horrible to lend a hand in gauging and understanding our various reactions to the game of baseball and life in general. 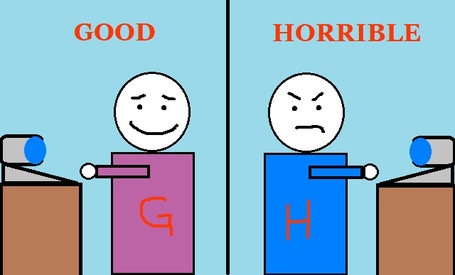 GOOD - celebrates with his amigos on his favorite blog by posting fun pictures, jokes and the occasional smart statement. Good enjoys interacting with the community in a positive manner, with the occasional good-natured ribbing and well reasoned criticism of happenings during the game.

GOOD - cries a little while looking wistfully at the box score, posts a cat gif to cheer himself and others up, makes a well founded and reasoned statement about why the game was lost, wears pants.

HORRIBLE - OMG FIRE EVERYONE WHBY EWE LOWE GAME I EXPECT 160 WINS WE HAVE MOENUS AND TEH BEST PLAYERS HOWFORCOME WE NOT WINED EVERY GAME!!11111 aka sustained overreaction and nigh irrational anger, insults other posters when posters suggest there'll be another game played, posts more Harlem Shake videos, and wears pants on head while kicking puppies.

So remember kids, when you're feeling your inner horrible about to rise (and, let's face it, we've all been that guy), let's take a nice deep breath and post in all caps because that's cruise control for cool. Oh... and don't be HORRIBLE!