With a warm-up over the last weekend and the chance at much warmer temperatures coming around the corner, we're losing the time of year when it is both socially and seasonally acceptable to be drinking darker, stick to your ribs porters and stouts. Now, nobody is going to stop you from ordering one of these, but you'll look pretty silly on a 100º day sitting out on the porch drinking a beer you can't see through.

Which leads us to our third "Beer of the Series" beer: Atwater Brewery Vanilla Java Porter 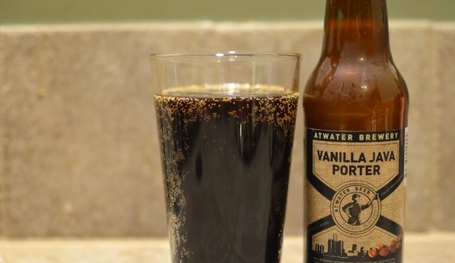 A few facts about Canada and the Blue Jays before we move on (note: none of these have been verified by National Geographic World, The Encyclopedia Britannica, or Wikipedia, though some have):

-No matter where you are in the US along the Canadian Border, the instant you cross over into Canada, the temperature instantly drops 32º plus 4/9ths of your original temperature

-Canadian beer is not actually stronger than American beer, but for a time, it was measured in ABV instead of ABW, and since ethanol is less dense than water, the ABW percentages are lower. However, most meathead Americans immediately saw the percentage on the label and started buying out Molson and Labatt Blue at the liquor store. All beer is pinned on the ABV system now, though.

Onto the beer now: Atwater Brewery is the closest brewery in Detroit to Canada, sitting on the Detroit River just down the street from the Windsor Tunnel. They have been in operation since 1997 and use 100% German equipment to make their beer. The Vanilla Java Porter is a smooth, sweet, versatile beer that you can drink with either a hearty steak and potatoes dinner or with ice cream after. The coffee flavor is the star at first, with a dark roast trapping itself in your nostrils, but the light vanilla and chocolate notes from the malt mellow out the finish, coursing through a menagerie of succulent flavors in between. At 5.5 ABV and 12 IBU, this is a fairly tame beer you can have 2-3 of during an evening and still enjoy the game.