Miguel Cabrera put on a masterful show with his bat in a 7-3 victory over the Blue Jays.

How good is Miguel Cabrera with the bat? We got quite the exhibition of his marvelous skill set this afternoon.

First at bat, Cabrera yanked a single to left. That was just the start of a killer afternoon.

Down in the count 0-2 in the 3rd, Cabrera shortened his swing trying to hit the ball toward the right side. Miggy would punch a single to right for his second base hit, only a perfect throw preventing a run.

In his third at bat, Cabrera went with a 3-1 pitch, taking breaking ball to the opposite field and over the wall in right for three runs, breaking a tight game wide open. Cabrera also became the first player to hit 100 home runs at Comerica Park with his first big fly of 2013.

Cabrera's fourth hit of the day came on his fifth at bat. Cabrera quickly turned on an inside fastball, which he drilled to left for an RBI single.

Cabrera's show over for the day, Torii Hunter confirmed all our thoughts about the reigning AL MVP on FSD's post game:

He is the BEST right handed hitter I've ever seen.

Jim Leyland was duly impressed by Cabrera as well:

To me he's the best opposite field home run hitter in the history of the game.

Announced attendance on a blustery, damp, cold afternoon in Detroit was 28,979. A decade ago, the Tigers drew 14,286 as they lost 9-6 to the Royals in their seventh game of the 2003 season, falling to 0-7. Honestly, I'm surprised attendance was that high back in the day.

Michigan Wolverines QB Denard Robinson was known more for his legs than his arm. Throwing out the first pitch today, we saw why, bouncing the ball ten feet in front of the plate 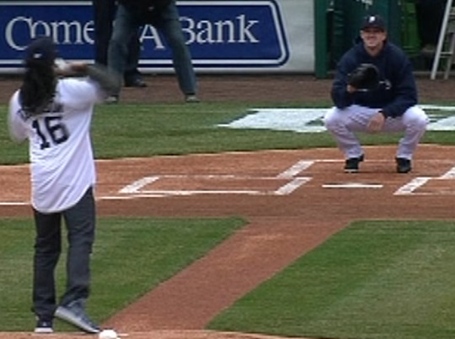 Even the biggest Don Kelly hater on the internets had to give Donnie Baseball his due after robbing J.P. Arencibia of a home run in the 2nd inning.

Alex Avila became a father for the first time on Sunday. The first pitch he saw after the birth of his daughter was sent over the right field fence. He nearly went yard again, sending Colby Rasmus 410 feet before running the fly down in dead center. New daddy strength has kicked in.

On Jose Reyes' RBI single, Omar Infate was either fooled by the spin of the ball off the bat or just didn't see it right away. He broke to his left on a ball hit to his right. The runner would have scored anyway, but it was odd all the same.

Those of you who had game seven in the "Fans bitching about Tom Brookens as 3rd base coach and pine for Gene Lamont" pool, please collect your winnings.

When it comes to 3rd base coaches, I agree with the guy running the @BlessYouBoys Twitter.

Gene-o, Brookens, robo third base coach, all the same

Torii Hunter's ridiculously good to start continues. His 4th inning single gives him six multiple hit games to start the season. Hunter's third hit of the game, a line drive single to center, was the 2000th hit of his 17 year career.

Sanchez took a line shot off his right calf in the 5th. He shrugged it off after a couple of warm up throws.

After Avila's long fly in the 5th was caught on the track, Lynn Henning went off on another of his "Comerica Park is unfair" rants. It took our own Phil Coke's Brain to talk Lynn down off the ledge.

What Comerica took in the 5th, it would give back in the 8th. Jose Bautista sent Jackson to the warning track in deep center At many big league parks, Bautista would have had a two run home run and made it a 5-4 nailbiter. At Comerica, it was just a long fly out.

The Tigers have now won 9 of the last 12 against the Blue Jays.

Good thing the Tigers were able to get today's game in, the forecast calls for an 80% chance of rain with the possibility of thunderstorms over the next two days.

Torii Hunter: Three more hits on the day, gives Hunter the team lead with a .424 BA. Watching him during the post game give compliments to his teammates showed why the Tigers were so eager to get the veteran outfielder into their clubhouse.

GAME SIX PLAYER OF THE GAME:

Matt Tuiasosopo earned the good graces of the BYB commentariat with a pair of hits and a walk. Big Squiggles beat out Justin Verlander and Torii Hunter with 51% of the vote.