Ahh, the beginning of spring. Flowers are in bloom, it rains every damn day, and you're a sniffling, sneezing, eye-itching mess.

Let's face it, unless you're getting out of school or you're playing golf (the actual playing of golf, not the driving to the course and trying to find parking and waiting on the tee for the guy who just started playing last week but thinks he can play from the black tees though he can barely get it to the white tees and tries to hit every par 5 in two from over three bills out), this time of year kind of sucks. The weather is never stable, your allergies are a mess, you're dealing with additional kids activities, you're trying to do yard work, but the rain ruins all the mulching you just did, and you're out in a hoodie and jeans at 10 am, then by 1 you're a sweaty mess cause it just got 40 degrees warmer for no good reason and you want to slaughter a chicken.

About the only good thing going on is the ramping up of the baseball season, when your team is discovering its identity as "division contender," "frisky team looking to compete in the wild card race and hasn't fallen off yet," or "the Houston Astros." Our beloved Tigers are in the category of the former, and it seems as though the Indians, thanks to new manager Terry Francona and umpires that apparently watch replays on black and white tube TVs, will be in the frisky category. However, unless Cerrano starts hitting or Dorn starts playing worth a damn, this team probably will recede into obscurity by mid July, as usual.

As for beer, we're transitioning from the times of "a beer or two at the end of the night" to "have a few with friends during the day." Easy drinking beers are the norm, but just because a beer is easy to drink doesn't mean that you need to sacrifice flavor, color, and uniqueness. Luckily, the Keweenaw Brewing Company way the hell up in the end of the world has just the brew for you. The beer for this home series is the Widow Maker Black Ale. 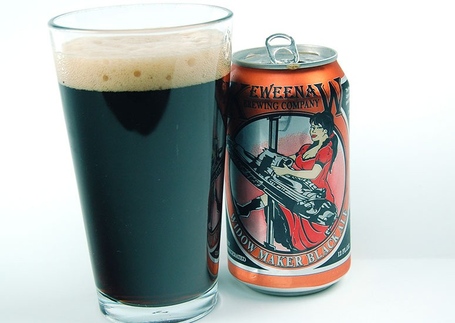 Keweenaw is a native word meaning either "portage location" or "we want to be way the hell away from any other humans and hey, look, there's copper here." My dad always said that you have to REALLY love hockey if you want to play at Michigan Tech. Copper Island should just change its slogan to "It's not the end of the world, but you can see it from there." But enough with the UP bashing, it features some BEAUTIFUL landscapes, the finest golf course I have ever played (Greywalls, go play it now if you're within a 5 hour drive, it's absolutely worth it), and some solid beer. The Widow Maker (gotta love any can that features a woman wielding heavy machinery) is a deceptively smooth, subtly hoppy ale with a nice caramelized smoky sweetness and a bit of a spicy, dry finish that pairs incredibly well with a BBQ chicken pizza. It's rich foam features a little hit of chocolate, and at 5.2% ABV and 27 IBU, it's definitely a good beer to share a 6 pack with a buddy during the game over.