The Tigers clobbered five Indians pitchers with nine extra base hits, including long home runs from Prince Fielder, Miguel Cabrera and Andy Dirks. Max Scherzer pitched a solid eight innings against the hottest team in MLB to win his fifth game of the season.

The Detroit Tigers snapped both their own two game losing streak and the Cleveland Indians' four game winning streak with a 10-4 victory in the opener of their three game series. The Tigers offense pounded five Tribe pitchers for for nine extra base hits, including three home runs.

Indians starter Corey Kluber (2-2) was tagged for eight runs and 11 hits in just 4 2/3 innings to take the loss.

The Indians mustered only five hits against Scherzer (six on the night), Nick Swisher accounting for three of them while scoring twice and driving in a run.

Showing off their power, the Tigers went yard three times. Prince Fielder, Miguel Cabrera and Andy Dirks all going deep. Both Cabrera and Alex Avila had three RBI to lead the Tigers on a night every starter had a base hit.

American League baseball returns. A fan base gives a huge sign of relief...

The hot hitting Indians continued to rake in the first inning, taking an early lead on a pair of extra base hits.

Jason Kipnis doubled over Austin Jackson's head in deep center and would score on Nick Swisher's two out double into the right center field gap. four batters into the game the Indians were up 1-0.

Going down meekly against Kluber in first inning, the Tigers joined the extra hit parade in the second, taking the lead.

Back in the lineup after being held to pinch hitting duty in the series with the Nationals, Victor Martinez walked on four pitches. With one down, Jhonny Peralta turned on a pitch on his fists, looping a double down the left field line, putting two runners in scoring position for Alex Avila.

Omar Infante blooped doubled to shallow right center off the glove of Kipnis, Avila forced to hold at third, getting a late start thinking the ball would be caught.

Torii Hunter followed with what should have been a two out, two RBI single to shallow right. But right fielder Drew Stubbs made a very smart play, throwing behind Hunter who had taken the turn. Avila scored the third run of the inning, but Hunter was tagged out by first baseman Mark Reynolds before Infante could cross the plate.

The Tigers extended their lead to 4-2 in the third when Prince Fielder hit crushed creamed demolished destroyed
obliterated Kluber's 91 MPH fastball, a moon shot which landed just in front of the retired numbers on the honor wall in deep right center for his ninth home run of the season (MLB.com video).

Tigers up 4-1, Scherzer had set down eight consecutive Indians before Swisher (the last Indian to have reached base) struck again in the top of the fourth. Swisher ripped a one out triple down the right field line, then scored when Carlos Santana bounced out to Infante.

Having moved to within two runs at 4-2, the Tigers came right back in the bottom half of the inning to extend their lead.

Infante doubled to left with one out, Jackson moved him to third on a Twins Hit single. Hunter went down swinging for the second out, but Miguel Cabrera was still due up with ducks on the pond. He's been near unstoppable this season with runners in scoring position and two out.

Nothing changed. Cabrera was still unstoppable. Kluber threw an 89 MPH nothing pitch which Cabrera hit crushed creamed demolished destroyed obliterated, clearing the bases with a tape measure shot to left landing in front of the honor wall in right center (as if Fielder and Cabrera were playing a game of "Top this!")

The three run big fly was Cabrera's seventh of the season (also giving him an MLB leading 40 RBI), the Tigers pushing their lead to 7-2 (MLB.com video).

Kuber managed to get two outs into the fifth before the wheels feel off for good. After Stubbs and Kipnis made nice defensive plays for the first two outs of the inning, Peralta's drive to left center bounced into the bullpen on one hop for a ground rule double.

Avila's single past a diving Kipnis drove home Peralta for the Tigers' eighth run of the night. Terry Francona bounded out of the Indians' dugout to pull Kuber post haste, having allowed eleven hits, seven for extra bases, and all eight runs.

Meanwhile, Scherzer was in prime form, mowing down the Tribe. Needing only eight pitches in a 1-2-3 sixth inning, Scherzer had retired eight straight.

Bryan Shaw, who had replaced Kluber in the previous inning, had the pleasure of facing Cabrera with one down in the sixth. He was soon in the dugout, Francona replacing him with lefty Nick Hagadone after Cabrera's line drive just cleared the glove of a lunging Michael Bourn in right center for a double.

Hagadone stuck out Martinez to end the inning, the Tigers still up 8-2.

The Tribe finally got to Scherzer for a couple of runs in the seventh, denying him a quality start, much in thanks to Swisher, quickly becoming a menace.

Swisher reached base for the third straight at bat, leading off with a single. Santana doubled to right, Swisher held at third. Mark Reynolds grounded out to second, the Tigers' infield playing deep, allowing Swisher to score. Michael Brantley followed with a sacrifice fly to left to plate Santana, the Tigers lead shrinking to 8-4.

Andy Dirks got one of those runs back with one swing of the bat in the bottom of the seventh.

Not having to face Swisher, Scherzer went back to retiring the Indians in order with a 1-2-3 eighth.

The Tigers added an insurance run the bottom of the eighth off lefty Matt Albers. Martinez's RBI single drove home Jackson to give the Tigers double digit runs and a 10-4 lead.

There was one question left to be answered as the game headed to it's inevitable conclusion. Would Scherzer get his first career complete game?

On for the final three outs would be Joaquin Benoit. He would get them, but with an adventurous first out.

Asdrubal Cabrera's pop fly dropped between a drifting Infatne and Hunter, but A. Cabrera took far too big a turn and ended up caught in a run down. Benoit would make the tag at first, a 9-6-1 putout.

It was cake from then on. Benoit finally got Swisher out with a K, and Santana lined to Dirks to end the game.

Now that's how baseball is supposed to be played.

Playing great at home (11-4 at Comerica), the Tigers raise their season record to 20-13, maintaining a one game lead over the Royals. The Indians drop two games back of the Tigers, their record dropping to 18-15.

Celebrity sighting of the night: If you were a fan of both Little House on the Prairie and thirtysomething, you're in pop culture heaven.

Newlyweds Melissa Gilbert and Timothy Busfield are at the Tigers game tonight.

To get the obligatory baseball tie-in, Lansing native and life-long Tigers fan Busfield was the brother-in-law who wanted the farm sold in guy tear-jerker Field of Dreams and the Twins' star first baseman in the underrated Little Big League. The more you know...

Rod Allen quote of the night: "Turn and burn."

The Tigers took the lead in the second inning, doing so in "That's baseball" fashion.

Two runs in, and the two hardest hit balls this inning have been outs

Marlins fans read these and curl into the fetal position.

Remember when Max Scherzer pitching late into a game was the exception rather than the rule due to high pitch counts? Tonight Scherzer was getting more efficient as he pitched deeper into the game. 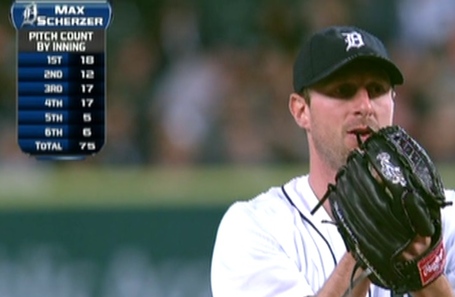 Samara of Roar of the Tigers was live tweeting while playing the Rod Allen Drinking Game. Things started getting hinky when the Tigers held a six run lead and the their talkative color man was telling anecdotes about playing in the minors, Japan and his very short tenure as an Indian in 1988. All mean drinks.

and extra innigns cuts off our broadcast so we are down.i will count this tomorrow but i can tell you that was a lot of rod allen drinkin

Post game, the Tigers announced Phil Coke would be activated from the 15-day DL, Luke Putkonen optioned back to Triple-a Toledo to make room on the roster.

Max Scherzer: Take Swisher out of the equation and Scherzer would have been damn near untouchable. Regardless, another solid outing for Scherzer.

Miguel Cabrera: Still good at baseball, finishing a triple short of the cycle with three RBI.

Alex Avila: Bat is slowly, but surely coming around. Hit the ball hard, had two hits and three RBI to show for his efforts.

Bottom of the order: Dirks, Peralta, Avila and Infante combined for a 9-for-17, five runs scored, four RBI, one home run night.

Nick Swisher: For whatever reason, Scherzer could not get Swisher out.

GAME 32 PLAYER OF THE GAME:

Matt Tuiasosopo's pinch hit home run made him a runaway PotG winner with 71% of the vote.