Snap reaction: Torii Hunter placed in a position to fail

Asked to bunt for the first time in a decade, Hunter's attempt didn't end well. What a surprise.

Share All sharing options for: Snap reaction: Torii Hunter placed in a position to fail

As tough as it was watching Jose Valverde throw fastballs even he was not sure where they were headed, what happened after he blew the save is what really bothered me. Well, lots of things did today, but I have to pick one and it's easy to harp on Valverde. We'll have more opportunities, I'm sure.

Let's harp on Jim Leyland instead.

What bothered me was Leyland misusing Torii Hunter, asking him to do something completely out of his element in a situation which could have set up Miguel Cabrera with a runner in scoring position and the game on the line. Instead, he placed Hunter in a position to fail. Which he did, miserably.

Leyland butchered the bottom of the ninth in asking Hunter to lay down a sacrifice bunt.

Torii Hunter's failure to get that bunt down in the ninth? He has one sacrifice bunt since 2001.

Hunter has spent the majority of his career as a middle of the order hitter, and bunting isn't one of his skills. Hunter could not lay a bunt down, ultimately bouncing into a rally killing 1-6-3 double play. It was a brutal at bat for Hunter (and game as well, an ill-advised throw costing the Tigers a run), not helped at all by what he was asked to do.

When asked, Leyland refused to second guess himself about the failed bunt:

Leyland on Torii bunt attempt: "No, I did not give any thought to letting him swing away. He just didn't get it down. That happens." #Tigers

But Hunter was surprised he was being asked to lay one down.

Asked Leyland if he gave thought to letting Hunter swing away in 9th, he said no.Asked Hunter if he was surprised at bunt sign he said yes

No kidding Hunter was surprised, being he's only done it three times. As Hunter said,

But ever the pro, Hunter shouldered the blame, saying he had a job to do and he didn't get it done. But I have a hard time holding his feet to the fire over something he is asked to do little more than once a decade.

Considering Hunter's skill going the other way (which we've seen in damn near every game), and a decent runner in Andy Dirks on first, Leyland would have been far better served to call the hit and run.

Bunting with Don Kelly? I can understand it. But asking Hunter? It was a horrible decision.

Yes, Valverde (where is the splitter?) and the offense (back in struggling to score mode) ultimately cost the Tigers the series. But Leyland gets some of the blame as well.

I'm a fan of Jim Leyland, but everyone has a bad game. This was definitely one on the bad side of the ledger for the Tigers' skipper.

Rod Allen quote of the day:

"No doubt there will be some baseball here today"

No doubt, considering there were players and umpires on the field, fans in the stands and broadcast crews in the booth.

Melissa had issues with the sartorial splendor of Rod and Mario.

Rod and Mario need help with their ties. Those things are atrocious. 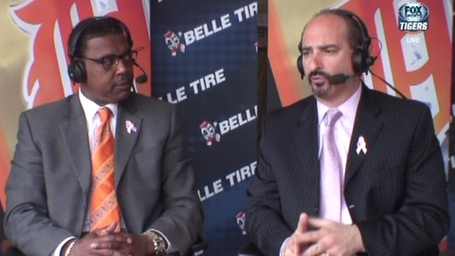 I can understand the pink tie on Mother's Day, but the orange tie was hit with an ugly stick from the 1970's.

Tigers fans don't forget. Ryan Raburn was booed when he came to the plate in the second inning. Raburn was welcomed by Rick Porcello in the fourth by getting drilled (accidentally) in the back, right between the numbers. Tigers fans nodded with approval...

Both Cabrera and Prince Fielder came up empty with the bases loaded,, highlighting the Tigers' season long struggles in that situation.

Since the nine runs in less than an inning disaster in Anaheim, Porcello had made three consecutive quality starts - 6 1/3 IP, 3 R and the W against the Braves, 7 IP, 3 R in a no-decision versus the Astros and now 6 IP, 2 R, getting another no-decison today. Every team in baseball will take that from their fifth starter.

FSD was busy hyping up the RBI totals of Cabrera and Fielder this afternoon, being both are on track for 150 plus RBI seasons. Rogo makes the point that RBI is, in many ways, a team stat.

FSD is obsessed with the RBI stat. Says as much about Jackson/Hunter as it does about Cabrera.

Disappointment was everywhere when the anticipated Potato - Raburn match up did not materialize.

Here it is - the moment that every Tigers fan on Twitter has dreamed about, The Potato vs. Rabu ... except Francona is hitting for Raburn/.

DAMMIT YOU SUCK FRANCONA WE WERE LOOKING FORWARD TO THIS. #Tigers

After Valverde blew the save, Kurt was a lone voice of reason.

Eh, it was going to happen eventually, at least it's a tie game

Good thing the Astros are coming to town. Talk about a the perfect opponent to help forget this series.

Phil Coke and Joaquin Benoit: Did their job, combining for 1 2/3 scoreless innings.

Rick Porcello: Another quality start for Porcello. He would have had the win if Valverde doesn't revert back to old habits.

The offense: Never a good sign when your backup catcher leads the offense. Their fluky struggles with the bases loaded really came back to haunt the Tigers today.

Jose Valverde: Faced six batters, walked two, allowing his first hit, run and blown save of the season. Valverde threw 29 pitches, every one a fastball. This is what fans expected to see from Valverde after his call up.

Jim Leyland: Not one of his better managed games, specifically in the ninth inning, asking a Hunter to do something he's only done once in a decade. Maybe call a hit and run next time?

GAME 34 PLAYER OF THE GAME:

A roaring hot Omar Infante did his damnedest to get the Tigers back into the game with a seventh inning triple and ninth inning single, which pushed him to the top of the PotG vote with 51%.