The Tigers will look to get back to their winning ways as the Houston Astros come to town for a three game series. Anibal Sanchez and Bud Norris are tonight's starting pitchers.

Share All sharing options for: Game 36 Preview: Astros at Tigers

As expected, Norris gave the Tigers trouble when he pitched against them 10 days ago, allowing two runs in seven innings. He struck out seven batters and looked downright dominant at times. However, that was at home, where Norris is 7-2 with a 1.89 ERA and 1.086 WHIP since the start of the 2012 season. On the road, he is 4-14 with a 6.81 ERA and a 1.698 WHIP. The problem? His command. He walks 4.65 batters per nine innings on the road, which is a bad idea against this Tigers offense unless your name is Ubaldo Jimenez. This season, Norris' road stats are largely skewed by a bad start at Oakland where he didn't make it out of the first inning. Take that out, and he has only allowed five runs (three earned) in 13 innings.

Norris was largely successful in his first start against the Tigers because he kept the ball low in the strike zone. 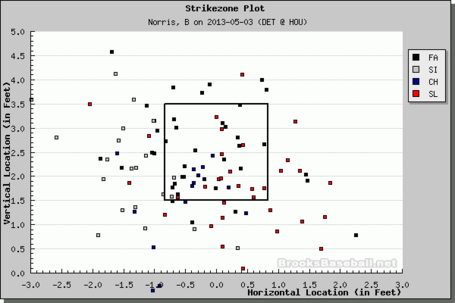 Even with a fastball that can get up to 94-95 miles per hour, he didn't dare attack the upper half of the strike zone against the big bats of the order. Miguel Cabrera's only hit against Norris, a double, was on a slider low and away. Price Fielder was 0-for-1 with two walks. Given how quickly they pick up on the nuances of opposing pitchers, we may see them be aggressive early in the count against Norris' fastball, especially if he starts leaving it up in the strike zone.

Sanchez was the only Tigers pitcher -- aside from Phil Coke, who was on the disabled list -- to not face the Astros in their series earlier this month. He is very familiar with the Astros franchise from his days with the Marlins, owning a 3-1 record and 2.08 career ERA against them. However, no hitter on their roster has more than 12 career plate appearances against Sanchez, and Carlos Pena is the only player with more than eight. Given what happened last time Sanchez faced a team leading its respective league in strikeout rate, this could be an interesting night.

Trouble with the curve

Tonight's matchup is encouraging, if for no other reason than that there are no 20 year old phenoms to crush hanging curveballs that Sanchez leaves over the plate. The curve has not been effective for him at all this year. Opposing players are hitting .333 off of that pitch, and the curve is already a full run below league average according to Fangraphs. PitchFX isn't so harsh, with his curveball sitting at 0.2 runs above average. His fastball and changeup, by comparison, are 3.5 and 4.5 runs above average, respectively. It's good to see that the pitch failing Anibal is the one he throws least often -- and it clearly hasn't affected his success this year -- but it would be nice if he could sort that out.

Even after losing two straight one-run games, the Tigers are still sitting in first place after what has been a pretty tough schedule to begin the year. After this week, they don't travel west of Kansas City for the rest of the season, and their toughest interleague road matchup is already out of the way, minus any possible matchups against Matt Harvey in August. That said, this team could use a win to get rid of the bad taste of yesterday's blown save. As long as the offense spots Sanchez a few runs, they should be able to scratch out a W tonight.

The Tigers get back on track with a win.