What's the he best prescription for a losing streak? A series against the woeful Houston Astros. The Tigers used a six run fourth inning, highlighted by Andy Dirks' grand slam, to beat the AL's worst team.

The Detroit Tigers continue their recent mastery over the Houston Astros with a 7-2 victory, beating them for a fifth consecutive time this season, snapping a two game losing streak in the process. The Tigers used a six run, two home run fourth inning to win in runaway fashion.

The Astros' Jose Altuve and Bud Norris both left the game early due to injuries.

Astros starter Norris (4-4) was forced to leave the game after five innings suffering from lower back spasms. Norris was tagged for nine hits and seven runs in taking the loss.

The hitting star of the night was the Tigers' newly minted lead off man, Andy Dirks. Ending the night a triple short of the cycle, Dirks had three hits, including his first career grand slam in the fourth, scored twice along with his four RBI. Victor Martinez homered for the Tigers, a two run shot.

Taking up from where they left off in Houston, the Tigers came out swinging in the bottom of the first against Norris to take a very quick, as in two batters into the game, lead.

Dirks drilled a line drive over the head of Robbie Grossman, landing just short of the warning track at the 420 mark in dead center for a stand-up double. Torii Hunter followed by doing the exact same thing, sending a fly ball to dead center over Grossman's head, which landed at the base of the center field wall in for a long RBI double. (MLB.com video)

Five pitches and nearly 840 feet worth of fly balls into the game, the Tigers had themselves a 1-0 lead.

After allowing a double in each of the first two innings, Anibal Sanchez was finally nicked for a run in the third.

Leading off, Marwin Gonzalez singled to center. Getting a huge jump, he stole second. Burgeoning Tiger Killer Grossman singled to right, Gonzalez scored easily. Grossman was able to advance to second on Hunter's second ill-advised throw in two days. Hunter attempted in vain to throw out Gonzalez, completely airmailing the cut off man.

Grossman would move to third on Paredes' single (who would proceed to steal second), and score the second run off the inning on Ronny Cedeno's (having entered the game for an injured Jose Altuve) ground out. Don Kelly staved off a third run when his throw home kept Paredes from tagging up on a fly to center.

The Astros parlayed three hits, two stolen bases, a ground ball and a bad outfield throw into a 2-1 lead.

The Tigers bounced back to take the lead in the bottom of the fourth before a batter was out. Prince Fielder led off the inning with an opposite field double to left center. First pitch swinging, Martinez followed with his second home run of the season, a line drive which just cleared the right field fence. (MLB.com video)

Up 3-2 and the inning far from over, the Tigers looked to extend their lead. They would, all but ending the game in the process.

After Alex Avila bounced out, Jhonny Peralta and Don Kelly had consecutive singles. Omar Infante walked to load the bases.

Unlike yesterday, the Tigers didn't come up empty in a bases loaded with less than two out situation. Dirks made sure of it by smashing a no-doubt grand slam deep into the right field stands to give the Tigers a 7-2 lead.

Norris would retire the next three Tigers, but the kill shot had been delivered by Dirks.

Having shaken off his early inning struggles and given a five run lead, Sanchez had retired 12 of the last 13 Astros he faced. He had only allowed only a fifth inning, two out walk to Paredes.

Sanchez struck out the side in the sixth, giving him four straight and seven on the night.

While warming up in the sixth inning, Norris somehow had injured himself and was removed from the game. Replays showed Norris grabbing at the lower lumbar while on the mound, the Astros calling it back spasms. Rookie right-hander Paul Clemens was called upon in relief and would throw hold the Tigers scoreless for the remainder of the game.

Sanchez received a well deserved "Handshake of doom" from Jim Leyland after seven innings, replaced by Jose Ortega. The impressive rookie tossed a scoreless eighth for the Tigers as the game rolled on toward it's inevitable conclusion.

Ortega allowed a meaningless ninth inning single before closing out the Astros, the game having been fait accompli since the Tigers' six run fourth inning.

The first place in the AL Central Tigers improve to 21-15 on the season, 1/2 game up on the Indians. The scuffling Astros fall to 10-29, having lost five in a row. They reside alone in last place in the AL West, a mere 15 games out of first.

In the second of the three game series, the Astros send Lucas Harrell (3-3, 4.67 ERA) to the mound, who was battered for ten hits and eight runs in his last appearance against the Tigers on May 4. Doug Fister (4-1, 3.14 ERA) gets the ball for the Tigers. He last faced the Astros on May 3, allowing two runs in six innings.

Austin Jackson was placed on the 15-Day DL with an injured left hamstring earlier today. The Tigers go as Jackson goes, so their record without him in the lineup isn't exactly shining.

There was a scary moment in the second inning, Astros second baseman Jose Altuve was involved in a hard collision with right fielder Jimmy Paredes. Jhonny Peralta popped up to short right, both Altuve and Parede called for the ball, neither bothering to look for oncoming traffic. The 5' 5" Altuve took the brunt of resulting collision with the hard charging 6'3" Parede, the ball dropping for a single. Unable to shake off the cobwebs, Altuve was forced to leave the game, though it was under his own power.

The Astros announced Altuve suffered a subluxation (partial dislocation) of the jaw on the right side. That was one hard lick given by Paredes.

Someone needs to stop Torii Hunter from airmailing cutoff men.

And that's three runs in a week on Torii's shoulders (or right arm, more accurately)

To paraphrase Samuel L. Jackson, "Fundamentals, do you know them?!"

Andy Dirks' grand slam was of a rare variety, and not just because of the Tigers' recent struggles with the bases loaded or that it was necked over the wall.

Dirks is the first Tigers player to hit a grand slam on an 0-2 pitch since Randall Simon did so off Blake Stein on 9/26/01 at KC. #tigers

It was also the first grand slam of Dirks' career and of the season for the Tigers.

After throwing just 30 pitches to get through the first three innings, Bud Norris needed 31 pitches to survive the fourth inning. That was game, set , match.

Anibal Sanchez is good at pitching:

Once again, Prince Fielder was wearing Sunglasses at Night. 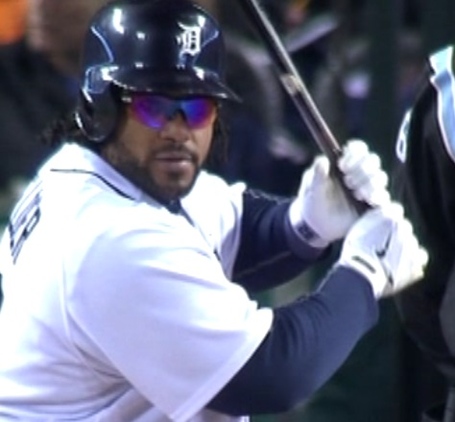 The Astros have done wonders for the Tigers' run differential.

Even if the #Tigers don't score again tonight, they'll still be averaging 8.8 runs per game against the Astros (they've scored 44)

Rod Allen gets the final word on what was a perfunctory victory for Sanchez and the Tigers.

I'm really digging this Sanchez cat these days!! And so are you. #thatsright

Andy Dirks: Going into the game, Dirks had hit .185 from the lead off spot in his career. Tonight, Dirks took to leading off like a duck to water, punishing Astros pitching with a single, double and a game changing grand slam for good measure.

Anibal Sanchez: A quality start (7 IP, 2 R tonight) will get you a roar every time.

Jhonny Peralta: The white hot Peralta reached base three times on a pair of singles and a base on balls, raising his average to .326.

Miguel Cabrera: A rare off night for the best hitter in baseball, 0-for-4 with two strikeouts, his 11 game hitting streak coming to an end. Even rarer, Cabrera was the final out in three innings.

Torii Hunter's throwing arm: Can someone please inform Hunter the cut off man is stationed where he is on the field for a reason? Thank you. This airmailing of the cutoff man is getting beyond ridiculous and is costing the Tigers runs.

Alex Avila: Another rough game at and behind the plate.

GAME 35 PLAYER OF THE GAME: