Doug Fister takes the mound tonight looking to give the Tigers their sixth consecutive victory over the Houston Astros this season. Lucas Harrell will pitch for the 'Stros,

Share All sharing options for: Game 37 Preview: Astros at Tigers

The Tigers tagged Harrell with his worst outing of the season back on May 4th, scoring eight runs on 10 hits and four walks in just 4 1/3 innings. They took an aggressive approach against Harrell, who primarily throws fastballs early in the count, and it paid off in a big way. He improved somewhat in his last start, allowing just two runs in five innings to the Los Angeles Angels, but he also issued six walks. He had no fastball command whatsoever, which leads to strikezone maps like this. 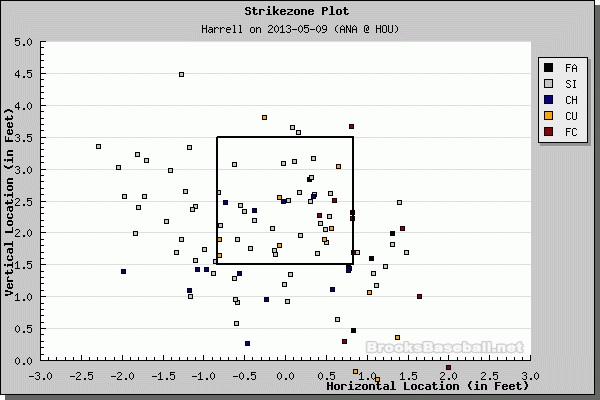 The walks are nothing new for Harrell, who issued 3.62 free passes per nine innings in 193 2/3 innings last season. Even then, he has learned to work around the poor command, something that his extreme ground ball tendencies allow him to do well. The Astros have turned 10 double plays behind him this year, tied for the most in the American League. As a team, they lead the major leagues with 126 double plays turned. While this is partially a function of how many baserunners their pitching staff allows, it also speaks to the type of team they seem to be building. If Harrell can keep the ball down in the strike zone with runners on base, he may be able to wiggle out of trouble enough to limit any damage that the Tigers offense can do.

When reviewing Fister's start against the Washington Nationals, I expected to see a lot of pitches left out over the plate, especially to right-handed hitters. Instead, I found that they were hitting pitches well outside the strike zone. 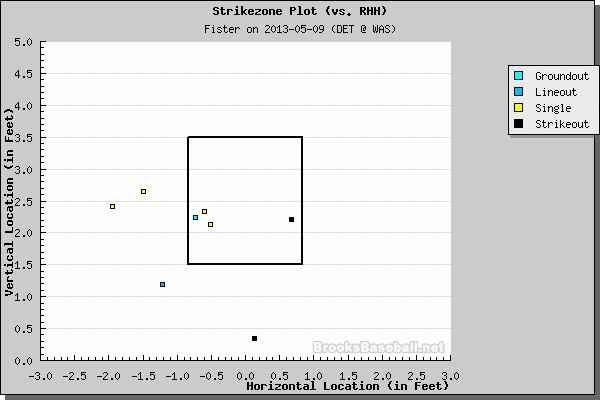 Even if the Nationals were getting a bit lucky, Fister was missing up in the strike zone with his fastball. He settled down in the third inning to retire the Nats in short order, and probably would have continued pitching if the Tigers weren't playing in a National League park. Either way, five runs on eight hits isn't pretty, and Fister will look to improve on that tonight. Expect him to get back to challenging hitters inside more often -- it looked like he tried to work away too often against Washington -- even if it means a couple more hit batters in the process.

No. The temporomandibular joint (TMJ, a.k.a. your jaw) is a pretty stable joint, so it takes a lot of force to jar it loose. Altuve is fortunate that it only subluxed (partially dislocated) instead of a full-on dislocation. He may see time on the disabled list, especially if he has any concussive symptoms to go along with the jaw issue. I would be shocked to see him again in this series.

It's extremely tough to win six consecutive games against an opponent in any sport, let alone one like baseball where you see the same team three or four days in a row. The Tigers' ability to take care of business against the Astros has been impressive so far, especially given that three of their five games have been against pitchers in Harrell and Norris that would be starters on just about any big league roster. Fister's relative struggles in his past couple outings -- he has allowed 17 hits and eight runs (six earned) in his last nine innings -- are concerning, especially since the Astros saw him 11 days ago. If he can continue to work through the mechanical troubles he has reportedly been having, the Tigers should be in good shape.

The Tigers win their second straight game, this time in a nailbiter.