I have never had the opportunity to sit inside a sauna, but I feel the experience is probably very similar to attending a Texas Rangers game. If I remember correctly, they are the only team in baseball permitted to host home games on Sunday night opposite ESPN's Sunday Night Baseball game because damn, it's just too hot to go outside. As someone who sweats walking from the front door to the mailbox, I have less than zero desire to attend a day game in Arlington. At night? The ballpark is lovely, has been full lately, and features one of the better teams in the American League in the last few years not afraid of striking you out or hitting you around.

In 2011, they did exactly that, knocking the Tigers out of the ALCS in 6 games, including hitting the fastest pitch all season out for a home run, eliciting a wry grin from Justin Verlander after Nelson Cruz somehow got around on a 100+ MPH fastball.

After that Game 6, I definitely needed a beer or five. Okay, that's a lie; after the third inning, I needed those five beers.

Like Houston, Dallas has been a little late to the party in regards to the microbrewing community. It's another small, but high quality community well distributed throughout Texas. For this series we will be featuring the Ugly Pug Black Lager from Rahr and Sons Brewing Company. 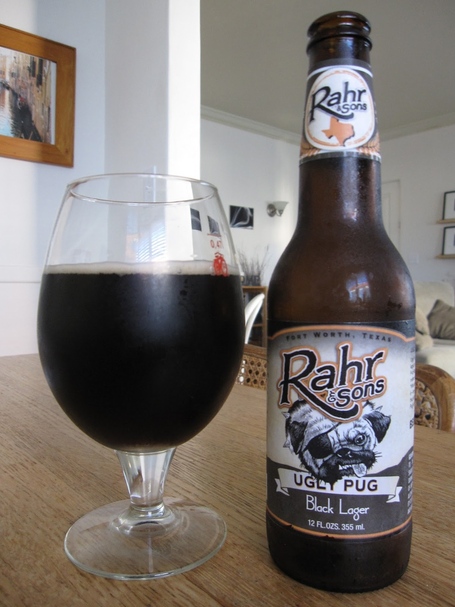 Schwarzbiers, or black lagers, are unique beers that act as a bit of a mindscrew. You look at a dark, creamy, frothy beer expecting bold, strong flavors, but you're pleasantly surprised with a light, easy drinking lager thats both flavorful and refreshing. The Ugly Pug definitely has the mind melding color, but the flavors, ranging from a bright roast coffee to a slightly sweet chocolate aroma and the clean finish of a crisp lager you wouldn't find out of place in a sunny summer day at the ballpark, liven up your palate without weighing you down. Uniquely drinkable at only 4.5% ABV (not EVERYTHING is bigger in Texas) and 26 IBUs, the Ugly Pug pairs wonderfully with -- what else -- barbeque.

Rahr and Sons Brewing Company is located in Fort Worth, TX.

A few other great DFW beers:

-"Achtung Spitfire!" Altbier, Three Eagles Brewing Company, Arlington, TX (One of my best friends from Purdue goes to school at UTA and made this, 'twas fantastic. Whats up, AMizener?!)