After a solid homestand of striking everybody out, Interleague play, #annoyinglongatbats, and striking people out, the Tigers head to Texas for the first of two series in the Lone Star State. While the visit to Arlington is the more familiar trip for these guys, the journey to Houston is the first for them as members of the American League.

The Astros are notable for several things of late, none of which have anything whatsoever to do with successful baseball. They made headlines by switching from the National League to the American League, changing their uniforms for about the fifth time in the last 20 years, and reducing their payroll to 20 bucks and a sack of potatoes. Their best player is most notable for being a measurement distance that has difficulty riding roller coasters. They have been bandied about to be one of the worst teams in baseball history.

Any of the above reasons is an excuse to drink. Luckily there exists beer amongst the smog and petrochemical plants. Houston has been a later entrant into the craft beer renaissance. Lack of quantity does not indicate lack of quality, however. Saint Arnold Brewing Company has billed itself as Texas' oldest craft brewery, offering a full line of beers. The choice for the BOTS is simple though. In honor of what the rest of baseball will be doing to the Astros all season, I present to you Saint Arnold's Fancy Lawnmower Kölsch. 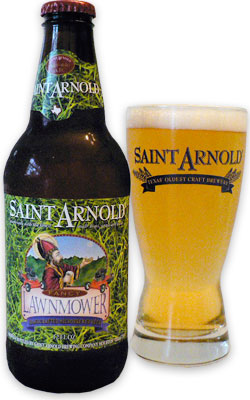 The kölsch is the quintessential summertime sunny weather beer. Originally brewed in Köln, Germany, this style of beer uses a unique type of ale yeast that actually ferments at lager temperatures, imparting a crisper, cleaner body and mouthfeel into the beer. Saint Arnold's Fancy Lawnmower features a light, subtle malty character to start with followed by a full on sweet citrus palate that finishes easy and allows you to notice the fruity notes in the beer. At 4.9% ABV and 20 IBUs, this is a fantastic beer for all of the great cajun food found along the Gulf Coast. If anyone is doing a crawfish boil, please invite me...