Twitter Mailbag: Talking Nick Castellanos, Bobby Higginson, and whether the Royals can challenge the Tigers in the AL Central

A few days ago, Kurt asked our Twitter followers for some questions. We answered those questions, plus a few new ones from our Twitter mailbag.

Share All sharing options for: Twitter Mailbag: Talking Nick Castellanos, Bobby Higginson, and whether the Royals can challenge the Tigers in the AL Central

As the title implies, I solicited some questions from our Twitter followers because I didn't want to subject myself to watching a Padres-Cubs game. Here are the answers.

As I said on Twitter, Kurt is probably stuck in a snow drift somewhere. He may also be running the SB Nation mothership and/or cleaning up after his dog. Whatever it is that you Yoopers do up there.

@blessyouboys Do you think Royals can hang with Detroit all year?

Yes, but not with how they are doing so right now. Their offense is 10th in the American League in runs scored, 11th in slugging percentage, and 10th in OPS. Meanwhile, their pitching staff is tied for second in the AL with a 3.49 ERA and has the fifth lowest walk rate in the league. We knew that James Shields and the bullpen would be good, and they have been. Wade Davis surprised everyone by winning his first three starts, but got roughed up by the Tigers and Indians in his last two appearances.

The surprises of the pitching staff have been starters Ervin Santana and Jeremy Guthrie. Santana led the majors with a whopping 39 home runs allowed last season and he has already allowed four in his first five starts this year. However, his 2.00 ERA is well below his 3.25 FIP and he is walking just 1.25 batters per nine innings. Santana has walked roughly three batters per nine innings throughout his career, so unless he made some miraculous changes over the offseason, I'd expect to see that rate climb as the season goes on.

Guthrie's ERA is 3.06, but he has a 4.97 FIP. Part of this is due to an elevated home run rate, something that he has also struggled with in the past. So why will he regress? His ground ball rate is much higher than it has been in years and he is currently stranding 92.3% of runners on base, both of which are probably unsustainable.

If the Royals are going to hang around all year, they need to get their offense going. Alex Gordon, Lorenzo Cain, and Alcides Escobar are doing the heavy lifting right now, but those three can't carry a team for an entire season. Billy Butler will come around, but guys like Mike Moustakas, Eric Hosmer, and Salvador Perez need to do more at the plate.

@blessyouboys What really is the best seat in COPA?

Personally, I'm a fan of the seats in sections 138-140 along the third base/left field line. You get a good view of the action, the seats are a bit cheaper than the ones behind home plate, and unlike those seats, you actually have a decent idea of when a fly ball is going to leave the park. The concourse doesn't tend to be as crowded over there either, and it's easy to jump up to the upper deck if restroom lines get too long.

@blessyouboys when will Castellanos arrive?

It's going to happen sooner rather than later. I don't think the organization would have sent him to Toledo this season if they didn't expect him to be in Detroit at some point this summer. He hit .264/.296/.382 in 79 games with Double-A Erie last season, and could have used a bit more time there to sharpen his pitch recognition. Granted, he was 20 years old and learning a new position, so a .678 OPS is far from the end of the world.

This year, things seem to be going better. He got off to a slow start, but is hitting .356/.634/.990 with five doubles and three home runs in his last 10 games. Andy Dirks and Matt Tuiasosopo are decent placeholders in left field for the time being, but if Castellanos continues to hit the organization won't keep him in the minors for too much longer.

@blessyouboys Do you feel that Bobby Higginson was an underrated player cause he played on really....really crappy Tigers teams?

I don't know if I would say that Higginson was underrated. In an era where guys were putting up gargantuan numbers at the plate, Higginson only had one season with an OPS above .900. He was worth 5.2 bWAR in 2000, but other than that was never worth more than 3.6 bWAR in any given season. Let me put it this way: Matt Joyce is putting up similar numbers for the Tampa Bay Rays in a more pitcher-friendly era.

Ironically, Higginson is exactly the type of player that the Tigers have been sorely lacking over the last few seasons. He was a solid lefty bat with decent power who could play average defense in either corner outfield spot. He hit left-handed pitching fairly well for a left-hander and could even run a little bit, swiping 10+ bases four separate times. If the Tigers could get 80% of what Higginson provided from Dirks and Tuiasosopo, they should be ecstatic.

The Pena half of this question is easy: what we're seeing is what we're going to get. He's not going to hit much, but he can call a decent game (when he's on the same page with his pitcher) and will provide a timely hit or two throughout the year. If he keeps Avila healthy, he has done his job.

As for Avila, I think we saw a slightly watered down version of the real him last season. He's not going to do what he did in 2011 on a consistent basis, but I think he's a better hitter than the guy that hit just .243 last season. He has gotten off to a slow start this year, but has walked four times compared to just five strikeouts in the last two weeks, so he is seeing the ball better at the plate. I would be happy if Avila hits in the neighborhood of .260 with 10-15 home runs and an on-base percentage north of .350.

I think we're already seeing the benefits of keeping Porcello, despite his awful outing in Los Angeles. Drew Smyly has been extremely versatile out of the bullpen, pitching in long relief duty when necessary as well as sliding into a late innings lefty role now that Phil Coke has gone on the disabled list. I still see Smyly as a starter in this rotation in the future, but with the lack of suitors on the trade market during the offseason, I think the Tigers were wise to hold on to Porcello. Unless someone blows away the Tigers with an offer, I don't see any reason for them to trade Porcello this season.

Anybody but that bum Drew Smyly, of course.

I'm kidding, we love Drew. Personally, Prince Fielder is my favorite Tiger. I have been very impressed with his approach at the plate. The monster home runs are great, but I love the fact that he's a patient hitter who can spray the ball to all fields. He also seems to be having fun at all times out on the field, and his t-shirt selection doesn't hurt either. 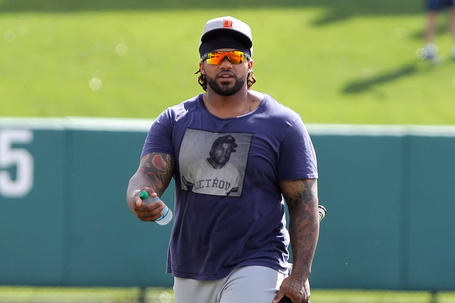 Yeah, I've got nothing.