Wow, 15 series! We're more than a quarter of the way through the season and the Tigers already have a nice, comfortable lead in the div...what? Wait, you're telling me we're not in first by 9 games already? Wait, THEY'RE in first??

Yes, your eyes, do not deceive you, the Cleveland Indians really are 2.5 games ahead of our beloved Tigers. Terry Francona has already paid dividends for the Tribe. Their strategy of "sign a bunch of Certified Tiger Killers and emulate the 2012 Orioles" is working fairly well. Sure, almost half their wins are in one-run games where they've gotten lucky as hell and they're getting other worldly efforts from Justin Masterson, Zach McAllister and...oh, who am I kidding, the Indians absolutely own us, we have no chance to win any of these games, get ready for #annoyinglongatbats and Mark Reynolds hitting balls all over downtown Cleveland. You're gonna need a drink.

Luckily, Cleveland has one of the finest craft breweries in the nation to wet your whistle. The Great Lakes Brewing Company has produced some of the best beers our country has seen over the last 25 years, including award-winners Dortmunder Gold, Edmund Fitzgerald Porter, and the Commodore Perry IPA. For this series, though, we're paying homage to the Nosferatu Imperial Red Ale. 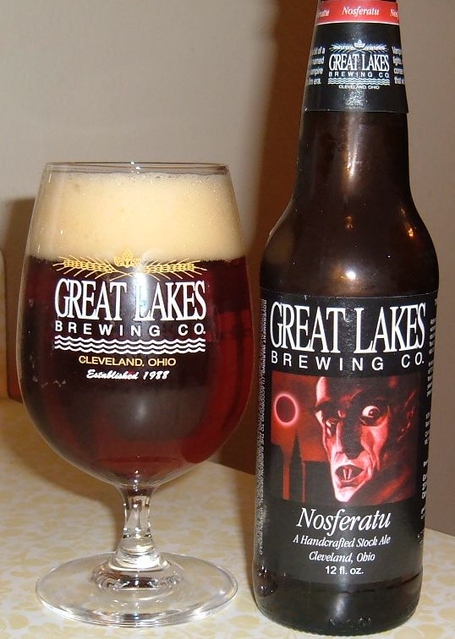 "Nosferatu" was the first ever film adaptation of Bram Stoker's Dracula made in Germany starring Max Shreck as Count Orlok. Great Lakes assumes you will be lured by the hoppy bite of this beer, which is phenomenal. That, or you'll start to sparkle (note: I almost vomited writing this sentence, so let's pretend like it didn't happen). It certainly wins for scariest bottle design, but the beer inside is worth the fright. The imperial red ale pairs a delicious toasted malt balance through a symphony of hoppy flavors. This original American craft beer staple is aggressive, flavorful, and wonderfully citrusy. At 8.0% ABV and 80 IBU, you'll love to pair this beer with a ribeye and potatoes, and it'll put you to sleep before you have to watch the bullpen.

The Great Lakes Brewing Company is located in Cleveland, OH.