A brilliant Max Scherzer remained undefeated, retiring the last 22 batters he faced in a victory over the Tribe.

The Detroit Tigers rode to victory on the right arm of a masterful Max Scherzer, who retired the last 22 batters he faced in a 5-1 win over the Cleveland Indians.

The undefeated Scherzer (6-0) pitched the best game of his career. He allowed two hits, a walk and one run in the first inning. After a two-out walk in the first, not a single Indian would reach base against Scherzer. He ended his night with an eight-inning, two-hit, seven-strikeout masterpiece. Jose Valverde pitched a scoreless ninth in a non-save situation to nail down the win.

What little offense the Indians could muster came off the bat of Michael Bourn, who had a two singles and a run scored.

Miguel Cabrera (of course) had the big hit for the Tigers, a two-run homer which capped off a three-run rally in the sixth, giving the Tigers their final margin of victory. Andy Driks also homered in the game-winning rally, adding a ninth-inning RBI single.

Coming off wild walk-off victories over the Mariners, "Team of Destiny" talk was being thrown around by the baseball media. For one night, Scherzer put an end to such nonsense with a dominant performance.

Drawing first blood, the Indians took a 1-0 in the opening inning, using singles from Bourn and Asdrubal Cabrera, followed by a one-out sacrifice fly off the bat of Michael Brantley. Scherzer would walk Carlos Santana before a fielder's choice got him out of the inning.

At this point both Kluber and Scherzer settled in, neither team doing much offensively. The Tigers only had one base runner through four innings, a Victor Martinez single in the second. The Tribe were just as unsuccessful against Scherzer, who retired ten straight after allowing the first-inning walk.

Martinez broke the hitless skein with a lead-off single in the fifth. Jhonny Peralta's bouncer found the hole in the left side on a hit-and-run, the Tigers generating their first threat. But that's where it ended. Matt Tuiasosopo striking out, Alex Avila out on a warning-track fly, Omar Infante ending the inning on a can of corn to center. Kluber had pitched out of a two-on, no-out jam, the Tribe maintaining their 1-0 lead.

Scherzer once again retired the Indians in order in the bottom of the fifth (including his FIRST of seven strikeouts on the night), but you had to wonder if he would get any run support with Kluber pitching so well.

Scherzer would get more than enough support in the next half-inning, the Tigers finally getting to the Indians' starter.

Jumping all over a Kluber fastball, Dirks slammed a lead-off no-doubt solo shot deep into the right field seats. Dirks' fifth big fly of the season tied the game at 1-all.

Torii Hunter followed by doubling off the base of the wall in right, setting the table for the best hitter in the game.

Cabrera did exactly what he did against the Rangers, making pitchers pay dearly for daring to pitch to him. MLB's leading hitter drilled a line shot over the wall in dead center, a two-run homer to give the Tigers a 3-1 lead. It was Cabrera's 12th home run and RBIs number 48 and 49.

Doing exactly what he needed to do, Scherzer tossed a shut-down bottom of the sixth inning, once again retiring the Indians in order. Scherzer's out streak was now at 16.

After Infante singled with one down in the seventh, Tribe skipper Terry Francona pulled Kluber. Right-hander Cody Allen took over. Dirks hit the ball hard, but at Bourn for the second out. Hunter worked a base on balls, giving Cabrera a shot with a runner in scoring position.

Unlike Ron Washington in a similar situation on Sunday night, Francona elected to pitch to Cabrera. Allen won the battle, Cabrera striking out on a shoulder-high fastball. The Tigers lead remained a tight 3-1.

Not missing a beat, Allen was dominating for the Indians, striking out the side in the top of the eighth.

Pitch count at 106 after the seventh, having effortlessly retired 19 in a row, Leyland allowed Scherzer to start the eighth. You can make it 22 in a row, a ridiculously dominant Scherzer striking out the side.

Scherzer then received the "Handshake of Doom" from Leyland, ending his evening. We would see (GULP) Jose Valverde in the bottom of the ninth.

In need of an insurance run, Avila worked a one-out walk against lefty David Huff. Infante's long single to left allowed Avila to advance to third. Dirks got the Tigers that insurance run and a 4-1 lead, knocking Huff out of the game with an RBI single.

Matt Albers took over on the mound for the Tribe. Once Hunter moved the runners over with a slow roller to the right side, first base was now open. No way in Hell would Francona allow Cabrera to beat him, ordering his big stick walked in order to face the Golden Sombrero wearing Fielder with the bases loaded.

Fielder shook off the four previous strikeouts, lining an RBI single to right to push the Tigers' lead to 5-1. But Martinez was caught looking at a 3-2 pitch for the final out of the inning, unable to completely Potato-proof the game.

Now a non-save situation, a warmed -p Valverde would still pitch the bottom of the ninth. Bourn led off the inning with a single, ending a streak of 22 consecutive outs. Of course he did.

The normally evil Jason Kipnis did the Tigers a solid, making the first out of the inning on a foul pop to Avila.

But a stress-free ninth was not to be, Valverde plunking Cabrera. Two on, one out, Brantley's fly ball to left didn't have enough juice, Dirks hauling it in short of the warning track.

Sweat on everyone's brow, Papa Grande would finally close out the Tribe on Santana's easy pop up to Peralta.

GAME OVER. There would be no miracle comebacks for a supposed team of destiny tonight.

Good Lord, a four-run, ninth-inning lead should not be a nail-biter. But Valverde did preserve what was a marvelous win for Scherzer, who has never been better.

The Tigers get a much-needed victory after losing 3-of-4 to the Rangers. Just as important was the bullpen, fried to a crisp due to pitching more innings than the starters in the Rangers series, got a much-needed rest thanks to Scherzer pitching deep into the game.

With the win, the 24-19 second-place Tigers pull to within 1 1/2 games of the 26-18 Indians in the Central, snapping the Tribe's five-game winning streak.

Max Scherzer allowing a first-inning run does not bode well considering the Indians record when taking the early lead.

Brantley's sac fly to right puts Indians up 1-0 on Tigers in 1st. Cleveland is 20-3 this year when it scores first.

The last time the Tigers lost an early season series to the Indians, bad things happened. To them, I mean. We went to the World Series.

Alex Avila had another bad at-bat in the third inning, punched out on four pitches. Fans are rapidly running out of patience, if they haven't already.

@acerhpdonkelly "It's a long season and ya gotta trust it."

Miguel Cabrera is amazing. Even his outs are entertaining. He was down 0-2 in his first two at-bats, yet worked both to full counts before being retired. If you can't get on base, at least make the pitcher work like Hell to get you out.

Things we learned about Rod and Mario tonight: Rod Allen likes Peter Frampton, Led Zeppelin and Bob Seger. Like myself, he obviously grew up in the 1970's.

Matt Tuiasosopo nearly decapitated Cabrera with a line drive into the Tigers' dugout. You can expect a GIF post from Rob featuring the hilarity which ensued. 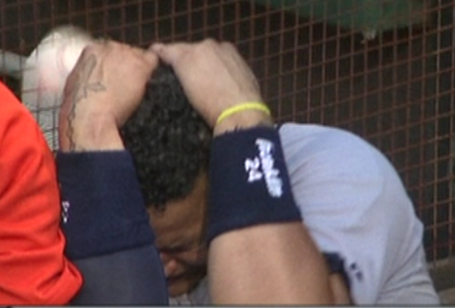 Two on, no outs, down 1-0 in the fifth, a power hitter in Tuiasosopo at the plate and a badly slumping Alex Avila on deck. What do you do?

Leyland loves those small historic samplings. But you play a non-bunter in Tuiasosopo in a bunt situation and you leave 2 runners on base.

Uh...WHAT? If there is one thing I've learned, asking players to bunt who rarely, if ever do so, never ends well. It didn't work out anyway, Tuiasosopo striking out. But giving away an out here would have been ridiculous.

Cabrera's sixth-inning homer moved him into the franchise career top ten, tied with Kirk Gibson at 199. Cabrera did it in five fewer seasons, seven compared to a dozen.

If you were a Tigers fan in the 1930s, you saw Hank Greenberg have a six-season run like this. If that's before your time, this is the best.

This attendance number is absolutely stunning, in a bad way. Your team is on an 18-4 tear, playing a division rival in near perfect weather, yet...

Paid attendance at Progressive Field: 17,374. Go ahead. You know you want to.

Laugh? Wonder where the Hell everyone is at?

Max Scherzer: Scherzer had perfect-game-level stuff, the Indians doing all their damage four batters into the game. After Asdrubal Cabrera's two-out walk in the first inning, not a soul would reach base against Scherzer.

Miguel Cabrera: His two-run big fly was the big hit for the Tigers, giving them a lead they would never relinquish.

Andy Dirks: Another nice game from the lead-off spot, playing a huge part in the Tigers' two rallies with a home run and an RBI single.

Victor Martinez: A badly needed good night at the plate for the Tigers' DH, going 3-for 4.

Omar Infante: A second lead-off hitter in the nine slot, Infante had a pair of hits, including a huge rally-sustaining single in the ninth.

Alex Avila: Walked and scored a run, but still looks lost at the plate after an 0-for-3 night.

Prince Fielder: Yes, he had a ninth-inning RBI. But he also earned a Golden Sombrero, which always deserves a hiss.

Jose Valverde: I should not be a nervous wreck when a closer enters a game with a four-run lead. Yet, that's the life of a Tigers fan with Valverde on the mound. He had to make it far too interesting, allowing a lead-off hit and hitting another batter, before ending the game.

GAME 42 PLAYER OF THE GAME:

There was no need to nominate anyone other than Miguel Cabrera, who was otherworldly with three home runs in a loss to the Rangers. Though "First plane out of Texas" did garner 26% of the vote.

• Kurt: Cabrera vs. Mike Trout? Not this debate again!