The Tigers will look to sweep the Indians at Progressive Field with Justin Verlander on the mound against the resurgent Ubaldo Jimenez.

Share All sharing options for: Game 44 Preview: Tigers at Indians

I think it's safe to say that the old Ubaldo is back. Jimenez has only allowed five runs in his last four starts and has struck out at least eight batters in each of his past three outings. His elevated ERA is the result of one bad start against the Boston Red Sox; remove that from the equation and he's humming along at 3-1 with a 3.92 ERA. Even his walk totals have come down. He has issued six free passes in his last three starts, which is excellent considering he has walked over four batters per nine innings in his career. He still isn't as efficient as he was at times in Colorado, but considering how bad he was last season, Indians fans have to be ecstatic with his performance so far.

In his outing against the Tigers, Jimenez primarily used a sinker-splitter combo, only featuring his slider on occasion. He threw 21 of his 25 splitters for strikes, but that's a fairly misleading stat. Of the 10-odd splitters thrown below the strike zone on the handy graph below, six of them were swinging strikes and two more were put into play for outs. 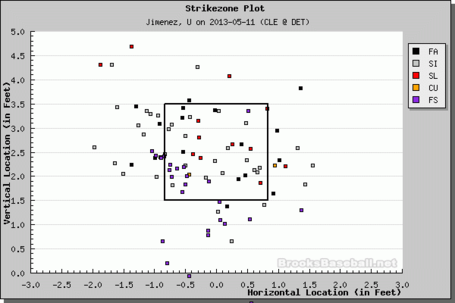 I wouldn't be surprised to see Jimenez use the slider more often today, but he may not need to if he has the sinker and splitter working for him again like he did 11 days ago.

It speaks volumes about the kind of start that Verlander has gotten off to in 2013 when he can have an outing as bad as the one he did in Texas and still have one of the best ERAs in the American League. He has achieved this despite a .333 BABIP and 26% line drive rate, both of which are well above his career norms. He is also walking 3.33 batters per nine innings, his highest rate since 2008. I'm still not overly concerned with his overall performance, but I am worried about today's start. Verlander has a career 5.38 ERA at Progressive Field and his 126 tOPS+ in Cleveland is the highest of any venue where he has made more than five career starts. If he comes out trying to establish his fastball early, we may see the Tigers fall into a quick deficit.

For as many plotlines as there are going into this matchup -- Ubaldo's resurgence, Verlander's recent struggles, Cleveland's apparent voodoo curse over former Cy Young winners, etc. -- I'm more interested in the individual matchups in tonight's game. I'm interested to see how Jimenez pitches to the red-hot Miguel Cabrera (if he does at all). I'm curious to see if Jason Kipnis' recent hot streak -- he's arguably the second-hottest hitter in the AL right now -- will override his horrible career numbers against Verlander. Will Verlander actually get Michael Brantley out for once? Victor Martinez had a good night last night, but can he repeat that again this evening? His numbers against Jimenez suggest he will. That said, tonight's game is probably going to come down to something weird like Jhonny Peralta hitting a triple or Don Kelly doing something positive with the bat. Hopefully the bullpen is up to the task.

• Kurt: Cabrera vs. Mike Trout? Not this debate again!